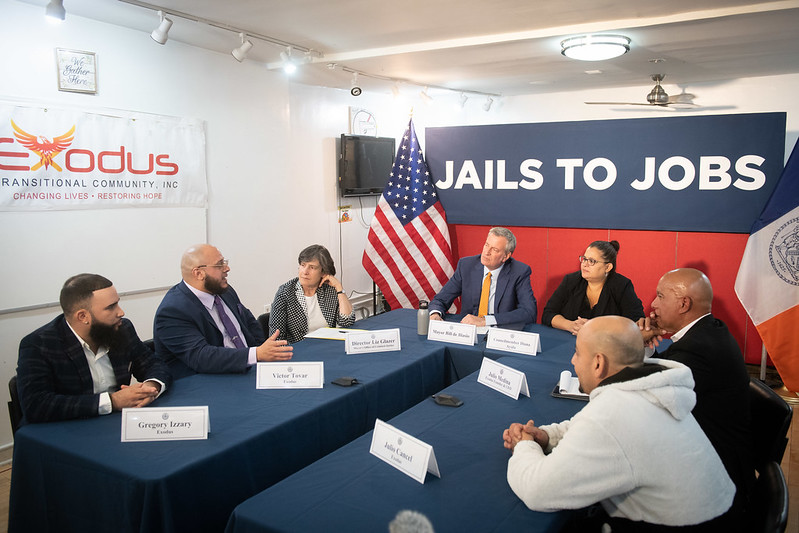 The mayor at a pre-pandemic jail to jobs (photo: Michael Appleton/Mayor's Office)

The COVID-19 pandemic has served as another reminder that New York is a tale of two cities. The wealthy and elite were largely able to sequester themselves safely during the height of the pandemic and resume city life once infection rates went down. Many may again be removing themselves as cases rise. But the most vulnerable New Yorkers are still left without basic supports and services.

This is especially true for people released from city jails and detention centers. They were ignored when they were behind bars, where COVID spread at alarmingly higher rates than the rest of the city. Now, with the pandemic still with us and possibly worsening again, these New Yorkers leave the despair and neglect of jail to only once again have their needs discarded as they reenter society. We demand the needs of our formerly incarcerated fellow New Yorkers be met. There can be no equity and equality until we treat all individuals as human beings.

When COVID-19 hit, protecting people behind bars was largely dismissed. People who are incarcerated were largely ignored, even though, as The Legal Aid Society reported, city and state correctional facilities rapidly became epicenters of the virus.

Rapidly soaring covid cases in jails like Rikers and others forced attention to that population and calls to release incarcerated people to protect them from the dangerous conditions that left so many vulnerable to the virus.  The city responded by releasing 1,400 people between March 25 and May 3. As of September 22, over 1,950 people had been released.

This may sound like a good outcome, but in fact the release of incarcerated people during the pandemic has exposed more sharply the injustice of New York City’s reentry programs.

People are released from New York City jails without the basic tools they need to reenter society, including a valid I.D., which is essential for securing housing and other services. Those returning home lack sufficient medication or immediate access to Medicaid coverage due to bureaucratic hurdles preventing the immediate transfer of their medication from jail. Perhaps most shocking of all, many people leave jail, despite the extraordinarily high risk of contracting the virus behind bars, which of course threatens to lead to further community spread given how many people come in and out of our jails.

These basic services could be addressed by the Mayor, who can utilize the IDNYC program to provide a valid ID and effectively transition people’s healthcare upon release from Rikers, while also mandating COVID-19 testing during the reentry process. To further ensure that New Yorkers can get their lives back on track once they leave jail, we must provide safe and stable housing options. Unfortunately, our very own government discriminates against formerly incarcerated individuals through the NYCHA permanent exclusion rule, which can prevent those with criminal records from securing tenancy. We must end this regressive and harmful policy, which disproportionately impacts Black and Hispanic New Yorkers.

We must also pair this change with an increase in affordable housing for those in the reentry process, and the city can and must increase the value of its housing voucher program to meet the fair market rates for housing unit rental prices, while also supporting existing City Council legislation to ban source-of-income discrimination from private landlords.

Establishing a just and wholesome reentry program is essential if we want formerly incarcerated people to fully return to society safely and prevent the recidivism that plagues our prisons and jails. So, Mr. Mayor: What are you waiting for?

***
Rabbi Barat Ellman is an anti-racism and criminal justice reform activist; a member of CAMMEERR, Children of Abraham, Martin, Malcolm, Ella, Emma, Rosa and Rose, a multiracial, cross-faith group; and of the Faith Leaders for Just Reentry Coalition of Trinity  Church of Wall Street. Shawanna Vaughn is an activist, advocate, and organizer for human rights, and the Executive Director of Silent Cry. On Twitter @BaratEllman & @SilentcrySv.