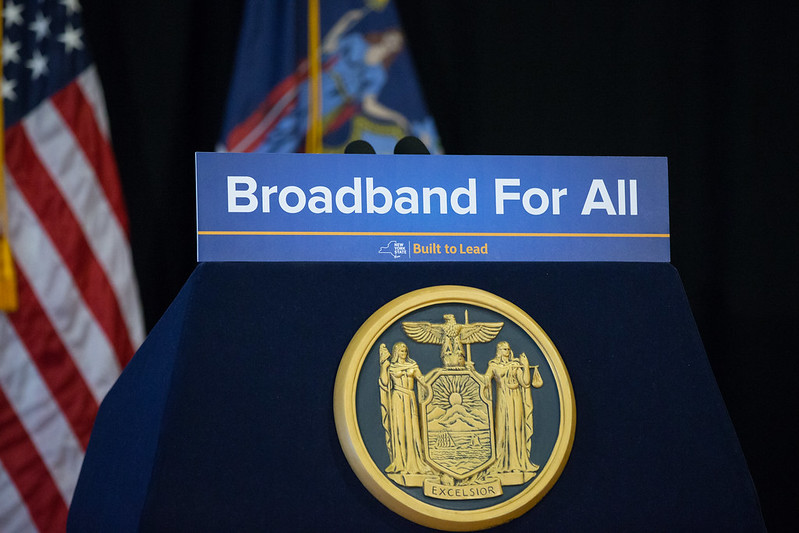 Just before the new year, a representative of a little-known telecommunications infrastructure company, Crowne Castle, made the case in an op-ed at Gotham Gazette that the key to closing the digital divide in New York State is more deregulation.

No one would disagree with the author’s assessment of the underlying problem: the pandemic confirmed, in case anyone remained unconvinced, that access to high-speed broadband is indispensable in modern society. Remote learning is impossible without it, and hundreds of thousands of New York school children are being left behind because their households lack high-speed internet service. At a time when visiting hospitals or a doctor’s office can be literally life-threatening, broadband is critical for conducting telemedicine as well as securing vaccine appointments. Likewise, for small businesses pivoting to online sales in order to keep their businesses alive. And on and on. Further, nearly one-fourth of New York State households don’t have home broadband (a sad fact unmentioned in the prior op-ed).

Crowne Castle says telecoms are begging to deliver 5G wireless service to everyone and pins the cause of the digital divide on alleged over-regulation of 5G small cell infrastructure in New York State. Strip local governments of the authority to regulate access to public streets and property, remove allegedly excessive fees, and just like that, deployment of 5G wireless technology will magically close the digital divide.

Pretty seductive, eh? Well, don’t be fooled. In fact, Crowne Castle’s cure means doubling down on exactly what got us into this mess in the first place.

There are two primary causes of the digital divide, and both can be traced directly back to industry-driven deregulation of telecommunications over the past 30 years. First, the failure of broadband providers to build out high-speed infrastructure comprehensively and equitably has left an untold number of New Yorkers without access to high-speed broadband. In many rural and lower-income areas, telecom companies decided it simply wasn’t sufficiently lucrative to invest in new, high-speed fiber networks. The second major cause of the digital divide is that many low-income New Yorkers just can’t afford high-speed internet service. While 92% of New Yorkers with incomes of $75,000 a year or more have home broadband, slightly over 50% of New Yorkers who make less than $30,000 a year have it. The pandemic has highlighted the impact of this harmful inequity.

Contrast this dilemma with the construction of the original universal telephone network in the middle decades of the 20th century. When AT&T was a regulated monopoly, state and federal regulators ensured that every American home was served by telephone service and that service was affordable. But swept up in the deregulatory fervor of the ‘80s and ‘90s, the 1996 Telecommunications Act deferred to markets, which were dominated by self-interested mega-corporations, to deliver next generation technology to the nation. The theory was that if cable companies and telephone companies freely competed in the marketplace, consumers would get the most advanced telecommunications products at reasonable prices.

The theory was wrong. Allowing telecom companies to pick and choose where they wanted to compete meant that some communities—like most of New York’s upstate cities and many rural areas, never got telecom fiber that would compete with cable companies. Unchallenged by telecoms, cable companies in those areas failed to upgrade their already overpriced services. Much of New York State endures a cable monopoly, with service that is both crummy and expensive. And in many rural areas, there is no high-speed service at all—and no mechanism for regulators to force buildout. Telecom and cable companies demanded deregulation and received it on a platter; today’s digital divide is the result.

That’s why the additional deregulation proposed by Crowne Castle is precisely the wrong solution. New Yorkers should also cast a skeptical eye on the hype surrounding 5G. First, 5G service available today provides no solutions for rural communities where broadband is least available. A few providers are piloting fixed 5G for home service, but the technology faces significant obstacles to large-scale deployment. For example, the fastest 5G spectrum cannot penetrate trees and walls—and is therefore not a reliable substitute for wireline broadband.

Second, the promised speeds of more than 500 megabits per second are not available from every carrier and don’t even reach most urban consumers today. For example, Verizon’s heavily hyped “ultra-wideband 5G” delivers superfast wireless speeds only in parts of dense urban areas, whereas its more widely available 5G using low-band spectrum is actually slower than 4G LTE much of the time. Ultra-wideband 5G requires radio and antennas spaced just a few hundred feet apart because the spectrum only travels short distances. AT&T Mobility also relies on low-band spectrum and has faced similar criticism that its 5G speeds do not exceed its 4G network in many cases.

Finally, 5G is not cheap. To take advantage of ultra-wideband 5G, you must purchase a 5G enabled phone and there has to be a 5G network of small cells blanketing where you live or work. That hardly seems like a formula for increasing the availability of high-speed internet to low income New Yorkers.

The Communications Workers of America, alongside other consumer advocates and elected leaders, has been fighting for reasonable regulation of 5G deployment to protect workers and consumers as this new technology comes online. New York City in particular has implemented sensible, model regulations that require orderly deployment of small cells. The city has pushed carriers to build in low-income as well as wealthy neighborhoods, and has required small cell operators to be transparent about the construction contractors they hire and the safety and training of their workers. In contrast, in cities where 5G deployment is like the Wild West, operators have hung small cells seemingly randomly, without regard to aesthetics or safety, and in some cases have even drilled holes in the middle of public sidewalks to install poles to support the cells.

Can someone explain the critical thinking skills behind a contractor that would install a #5G tower in the middle of the sidewalk, impeding wheelchairs and parents with baby carriages? Outside of a historic building? And horrific sidewalk repairs ( I use the word repair loosely) pic.twitter.com/jVJyvMtxZE

That preemption kicked in when I was still in local government, it sucks. Folks in my Miami Beach neighborhood are fighting with Crown Castle right now over 5G poles.

Repeatedly over the last several years, the industry has tried to sneak small cell regulatory preemption into the state budget under cover of darkness, in an effort to nullify regulatory initiatives like the one in New York City. Wisely, state legislators have successfully rebuffed this maneuver each time, preserving the authority of the state’s cities and towns to promulgate sensible regulations to protect workers and consumers. That’s the way it should stay. New Yorkers should remain skeptical of claims that deregulation is a panacea for the digital divide, and instead focus on policies that can truly promote additional broadband buildout and universal access for low-income New Yorkers.

***
Bob Master is Assistant to the Vice President of CWA District One. City Council Member Francisco Moya is Chair of the Council Subcommittee on Zoning and Franchises. On Twitter @cwabobmaster & @FranciscoMoyaNY.