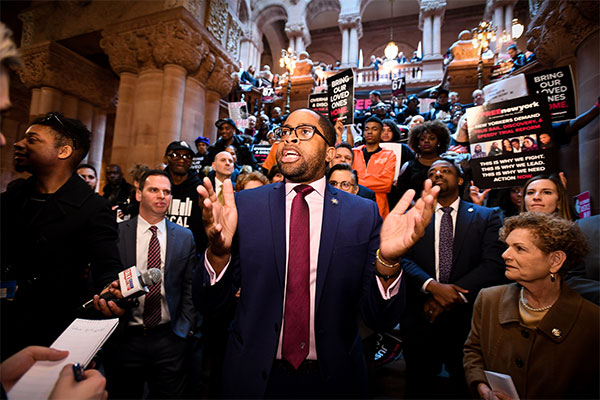 State Senator Myrie, a co-author, with other electeds and advocates

2020 was a year of tragedy and despair, hope and resilience. In 2021 we must take long overdue steps to address the myriad injustices laid bare by the pandemic, and others plainly evident well before COVID-19.

We must shore up our medical system and our schools. We must rebuild our social safety net. And we must once and for all, decidedly and without hesitation, address the long-standing harms perpetrated by the criminal legal system against communities of color. This is why, in 2021, we will be advocating for legislation that will finally start to address the pernicious issue of wrongful convictions in New York.

We are a Black State Senator representing parts of Brooklyn most deeply impacted by mass incarceration and a person wrongfully convicted of a shooting in Brooklyn during the 1990s. This summer we marched alongside thousands of New Yorkers to protest police brutality and the racial injustices that are ingrained in our criminal legal system. We were saddened, but not surprised, by the tragic and avoidable deaths of George Floyd, Breonna Taylor, and so many other Black Americans at the hands of police in recent years, and those going back decades. For us, and the community that we live in and serve every day, stories of injustice are all too common.

Our criminal legal system has been failing the Black community forever. Black Americans make up only 13% of the U.S. population, but almost 40% of the prison population. This stark racial disparity is a result of years and years of inequality and injustice. After slavery was abolished in 1865, the number of Black people arrested and incarcerated surged, leading to the country’s first prison boom. Since then, the incarceration of Black Americans has been used as a form of social, political, and economic control.

We are both proud of the pre-trial reforms the New York State Legislature passed in 2019, thanks, in part, to years of advocacy by groups like VOCAL-NY. But bail, discovery, and speedy trial reform enhance legal protections for people accused of crimes going forward, and does not repair the harm committed against Black people and other communities of color by racist or biased policing and prosecutions prior to 2020. Justice demands that we not only look forward, but also bring to light past harms committed by the state against our communities.

In 2020, Senator Myrie (a co-author of this column) introduced in the Senate, along with Assemblymember Dan Quart in the Assembly, a bill to affirmatively address wrongful convictions in New York. The bill, drafted with input from directly-impacted people including Roger Clark (the other co-author here), will remove barriers to post-conviction review to ensure that people who were wrongfully convicted have a meaningful opportunity to clear their names. Under the current law, they do not; people who have been wrongly convicted can only bring their case back to court if their case fits into a very narrow category. Because of this, judges routinely deny hearing new evidence in a wrongful conviction case because of procedural and technical roadblocks.

Since 1989, 2,619 people nationwide have been cleared of all charges against them after being wrongly convicted of a crime. In New York alone, 291 people have been exonerated, and significantly, over half of those people are Black. But those exonerations are only the tip of the iceberg. There are thousands more wrongly convicted men and women in New York who, because of the way the law is currently written and interpreted, have no legal avenue to bring their case back to court. We must fix that.

Wrongly convicted men and women may have faced racial injustice or police brutality that was not caught on camera. They may have pled guilty to a crime they did not commit in order to avoid the lengthy prison sentences that arose during the ‘Tough on Crime’ era. Or they may have been denied their constitutional rights while being funneled through a racially-biased legal system.

No matter what the circumstances were, people who have been wrongly convicted in New York deserve a chance to be heard. Their stories and evidence deserve to see the light of day. Denying people that opportunity discredits our entire criminal legal system.

2021 provides a crucial opportunity for New York to address decades of systemic racism against the Black community. Passing the Wrongful Conviction Bill is a long overdue first step.

***
Senator Zellnor Myrie represents the 20th State Senate District in Brooklyn. Roger Clark is a Community Leader and criminal legal system reform advocate at VOCAL-NY and the Founder of the Crimmigration Initiative. On Twitter @SenatorMyrie & @VOCALNewYork.