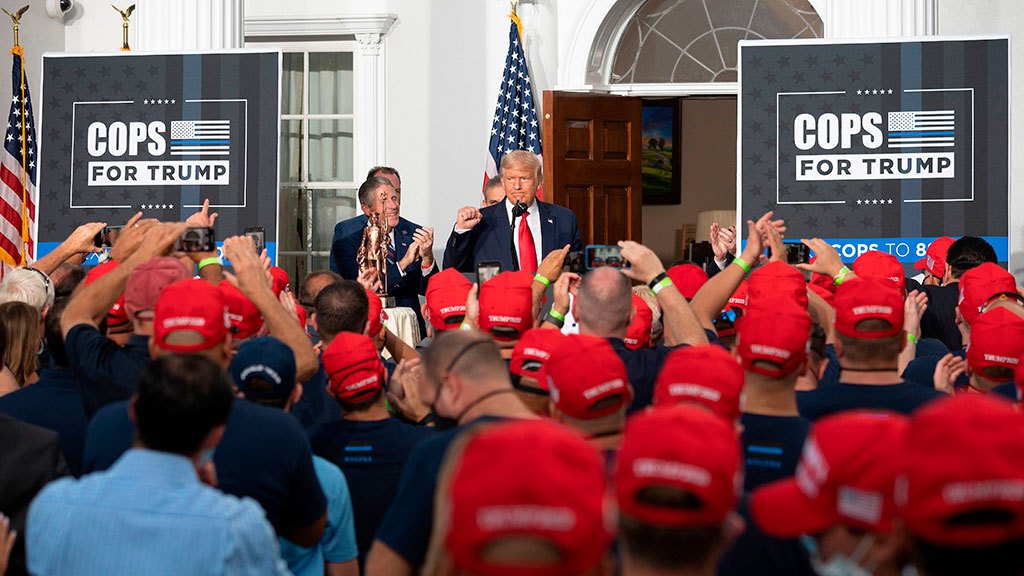 Donald Trump is endorsed by the PBA (photo: Jim Waston/AFP/Getty)

The January 6 riot at the Capitol in Washington D.C. exposed deep liabilities within law enforcement. Cops and ex-military men and women actively participated in the insurrection. While some on-duty officers acted professionally, even courageously, others were clearly complicit with a violent, lawless assault on our nation's capital. Numerous politicians and pundits, including our new president Joe Biden, commented that if it were a Black Lives Matter protest, and not mainly a white mob, the law enforcement response would have been much harsher, if not brutal and deadly.

All this should not have been surprising given what's known: large urban police departments target Americans of color daily, showing their stark racial bias. A study released in August 2020 by the Brennan Center for Justice reported that "research organizations have uncovered hundreds of federal, state, and local officials participating in racist, nativist, and sexist social media activity.” Abusive cops are tolerated daily. The chickens came home to roost.

For example, in New York, the city that my organization, PROP, works in, we know these numbers regarding NYPD practices: 85-90% of all misdemeanor arrests are of New Yorkers of color; about 95% of juvenile arrests involve Black and Latino youngsters; about 90% of the people locked up on Rikers Island are New Yorkers of color, most of them there because an NYPD officer has arrested them and they are too poor to afford bail.

Last year the two largest police unions in New York—representing police officers (The Patrol Officers Benevolent Association) and State Troopers (The Police Benevolent Association of the New York State Troopers)—endorsed Donald Trump for president. They chose to get behind an autocratic politician whose words and actions have clearly provided comfort and support to white supremacist groups. What message, or warning, were these unions sending to the rest of the country by enthusiastically backing a politician who launched his presidential bid in 2015 with a speech featuring racist comments about Latino people and then ramped up from there.

In jurisdictions across the country, politicians in power and police brass regularly give a pass to officers who engage in misconduct. In Minneapolis, Derek Chauvin, the officer who applied his knee to George Floyd's neck, thereby killing him, had at least 22 complaints or internal investigations involving him. He was sanctioned just once, the department sending him a letter of reprimand. Still, that department assigned Chauvin to partner with and train police rookies.

In Kenosha County, Wisconsin, the district attorney declined to indict Rusten Sheskey, the officer who shot Jacob Blake seven times up close and in the back, not even on a relatively minor charge like reckless endangerment.

The Brennan Center reported that "officers' racist activities are often known within their departments, but only result in disciplinary action or termination if they trigger public scandals."

In New York City, officers who engage in conduct that is undeniably abusive or lawless are rarely if ever fired or even the recipients of slap-on-the-wrist sanctions. The New York Times published 62 videos of NYPD officers physically intimidating and violently assaulting New Yorkers who participated in the protests following the murder of George Floyd. The city's own Department of Investigation issued a report in December finding that the "NYPD...resorted to aggressive disorder control methods that stoked tensions and stifled free speech."

New York State Attorney General Letitia James, according to her office, "filed a lawsuit against the NYPD and its leadership to end its pattern of using excessive force and making false arrests against New Yorkers during peaceful protests." Yet, despite all the contrary evidence and reflecting the corruption of public discourse that leads to police officers thinking they are above the law, last summer both Governor Cuomo and Mayor de Blasio provided very limited criticism of the NYPD and mostly condoned its handling of the demonstrations. De Blasio went so far as to make the Orwellian claim that city cops by-and-large acted "with restraint."

As if to underline the problems cited in the Brennan Center report and in the Attorney General's lawsuit and to emphatically demonstrate the disparity in how police handle a mob of white supremicists and marchers for racial justice, on the night of Martin Luther King Jr. Day, the NYPD clashed with Black Lives Matter protesters at City Hall Park in Manhattan. Video clips show officers charging the demonstrators. A Daily News article quoted a participant: "They were really violent. Cops were shoving folks, pummeling people, tackling them."

Asked about the incident, Mayor de Blasio justified the officers’ actions by saying that after the Capitol riot in Washington, there is particular sensitivity about any protest near City Hall.

The DC riot threw a number of our nation's problems into stark relief, including how the racist culture and practices of our policing apparatuses undermine the ability to truly protect and serve all American people. Perhaps the revelation will turn out to be a positive outcome, leading our society and government to seek responses other than cops to address and resolve social problems, and for all localities to look much more closely at their police departments. A recent example of this new attitude took the form of relying on thousands of National Guard troops, rather than local or state police, to ensure public safety on Inauguration Day in America's capital.