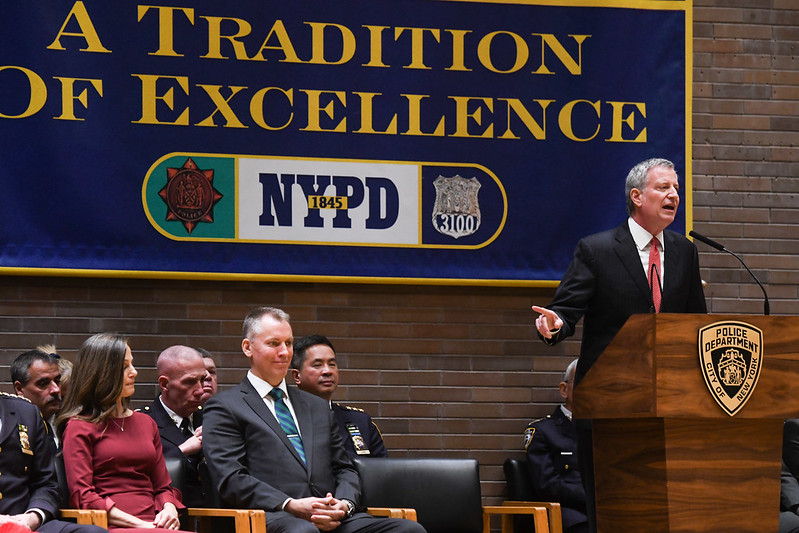 Last month, New York Attorney General Letitia James filed a groundbreaking lawsuit against the City and the NYPD “to end the pervasive use of excessive force and false arrests by the NYPD against New Yorkers in suppressing overwhelmingly peaceful protests.” The suit was in response to the NYPD’s use of force at last summer’s racial justice protests. The complaint alleges multiple examples of excessive force, and presents a detailed critique of the NYPD’s handling of both the summer protests and many other peaceful protests that came before.

Litigation seeking systemic reform is a long and messy process and should never be a first resort. But because Mayor de Blasio has consistently refused to make necessary reforms to the NYPD even when given specific roadmaps about how to do so, litigation is now the most promising option on the table. Indeed, as the Attorney General’s complaint points out, nothing short of a federal monitor has yet to change the Department’s behavior in this area. To that end, the complaint alleges that the NYPD has engaged in unlawful practices against peaceful protests for years and failed to voluntarily take corrective action despite multiple warnings in the form of reports and lawsuits. A failure the Mayor and Police Commissioner now concede.

We have seen this process play out in similar circumstances ourselves. For five years we ran the City’s Department of Investigation, which oversees the NYPD’s Inspector General. During that time, we issued several reports on systemic failures that were largely brushed aside by the NYPD’s top leadership and the Mayor. Most importantly, in 2018 we issued a Report that demonstrated that the NYPD repeatedly failed to properly investigate sexual assault and continuously failed to properly staff and train the officers responsible for these investigations. Despite the Report, and despite the protests and City Council hearings it fostered, the NYPD failed to take action on its most central recommendations.

Moreover, these were not new problems. During our investigation into the Special Victims Division, we discovered that an internal 2010 report had come to the same training and staffing conclusions and thereafter there had been repeated complaints from the head of the unit about these problems. So, the NYPD had been ignoring these issues for at least eight years. The Mayor and Police Commissioner were unwilling to insist on key police reforms, even where rape cases were often poorly investigated or at times not investigated at all. According to the NYPD IG’s most recent Annual Report issued last year, over half of DOI’s recommendations regarding investigation of sexual assault remain unimplemented.

Another example – which has disturbing echoes of the problems identified by the Attorney General in her lawsuit – involves the NYPD’s reporting on use of force. In a lengthy Report in 2018, DOI found that the NYPD, despite promises to the contrary, was failing to properly monitor, track, and report on the use of force by its officers. Specifically, although the NYPD had created a Threat, Resistance or Injury (TRI) form to track use of force, too often officers either failed to fill out the form or did so improperly. Again, the Police Commissioner and the Mayor refused to make significant changes – as of the most recent reporting by the NYPD IG, over half of the recommendations have still not been fully implemented.

Indeed, according to the most recent Annual Report from the NYPD IG, just slightly over half of all recommendations made since 2014 by DOI to the NYPD have been fully implemented. And these recommendations themselves were the subject of extensive discussions between the IG and the Police Department before they were ever published. They are not recommendations issued in a vacuum without consideration of the realities of modern policing.

None of this is intended as an overall indictment of the 36,000 officers in the NYPD – the vast majority of whom do a difficult job exceedingly well. Indeed, calls to defund the police miss the mark and will not result in necessary reforms. We do not need a vastly smaller police force; we need a police force that reforms certain specific dangerous and unconstitutional practices. A federal monitor of, rather than defunding, the police is the best way to get there.

Two arguments have been raised in opposition to the Attorney General’s lawsuit: First, that the NYPD already has multiple monitors and second, that last summer’s protests presented a volatile situation that was difficult to police. While both statements are true, neither, as an argument, should prevail. As to the first, while there are multiple NYPD monitors, none, in this area, have the backing of a federal court and thus the NYPD has felt free to disregard the monitors’ recommendations. As to the second, policing protests is certainly difficult; however, that is exactly why it requires proper training and must be done correctly.

It is important to acknowledge that the monitor sought here would only deal with the one issue raised in the Attorney General’s lawsuit. Nevertheless, monitorships have been powerfully effective in the past, most recently in reducing the use of stop-and-frisk. A monitorship here could give the hardworking officers in the NYPD the tools they need and the training they deserve to be better partners with the community.

This Mayor and his police commissioners have repeatedly shown an unwillingness to make needed changes even when confronted with evidence of problems. If they haven’t taken steps they’ve known were needed for the last seven years, it’s hard to imagine they will do so now.  For this reason, we’ve reached the point where a federal monitor to force change on the NYPD is the best option for this Department.

***
Mark Peters and Lesley Brovner are the founding partners of Peters Brovner, LLP and from 2014 to 2018 served as Commissioner and First Deputy Commissioner of the Department of Investigation, the City’s Inspector General.