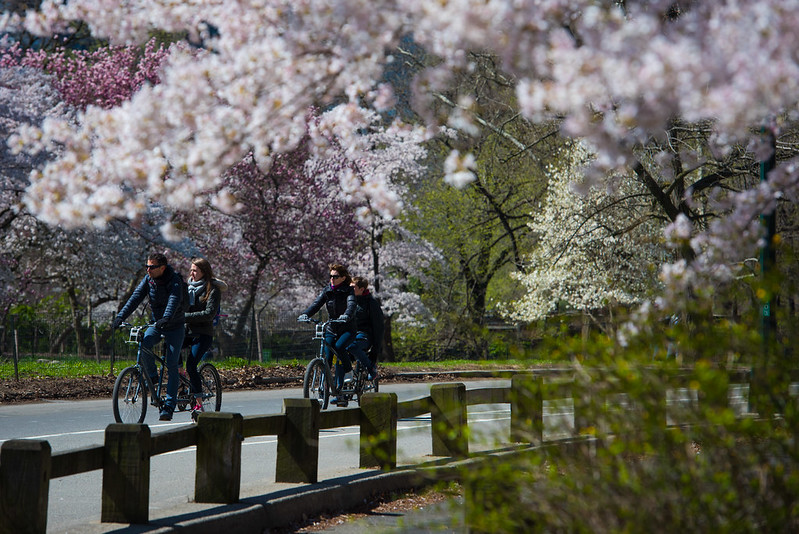 The past year has taught us all just how valuable outdoor space truly is, and how much our current cityscape is sorely lacking. Nearly 20% of New Yorkers, almost 1.5 million people, are not within walking distance of a park. But there is a solution right before our eyes, a hidden “Decentral Park” in our city’s streets.

Open Streets, Open Restaurants, and pop-up bike lanes have turned our conception of how we can and should use our streetscape on its head. As our street grid makes up 27% of the land in New York City, it’s about time that we look for ways to use those precious square feet to give the most benefit to the most people. By reclaiming just a fraction of our on-street parking spaces to make pocket parks, we can transform our curbs from unsightly storage into much-needed community hubs and green space.

Although the city is currently home to more than 2,300 parks, they are unevenly distributed. Lower income areas and communities of color, neighborhoods like the South Bronx, Jackson Heights, and Crown Heights, are among those with the least amount of land devoted to public space. Affluent, and often whiter, neighborhoods have not only greater access to parks, but also more park space in total: according to the Trust for Public Land, average park size in wealthy neighborhoods is 14 acres, while in poor neighborhoods it is just 6.4 acres.

We all benefit from parks, and a decentralized network of small parks throughout the five boroughs will help level this playing field – literally. While marquee greenspaces like Central Park or Flushing Meadows-Corona Park offer flagship destinations for New Yorkers and visitors alike, the power of small parks is underrated. Research shows that exposure to even small amounts of green space and nature can reduce stress, and that access to communal space helps build interpersonal relations and supportive social networks. Providing parks within access of every New Yorker will make us a healthier and happier city.

There are 3 million on-street parking spaces in New York City. By exchanging just 10% of these parking spaces for pocket parks, we can immediately create universal park access. The city’s current definition of a parallel parking spot is 8.5 feet deep by 24 feet long – which means that in each spot, there is over 200 square feet of potential public space right in front of us. That alone is bigger than some of our apartments, but together it could amount to over 1,300 acres of public space, more than one-and-a-half Central Parks in our citywide DeCentral Park.

Pocket parks can take a variety of forms, and we have to look no further than the existing Street Seats program as a starting point for potential designs. Different models can include tables, chairs, and benches, others can include more active play equipment, and still more could be home to community gardens or other greenery. These parks can and should be as varied and diverse as our communities themselves, and implementation must include community visioning to ensure that they are empowering spaces, not imposing ones.

You would be hard-pressed to find a more heated point of contention in New York than parking, and challenging the status quo will not be easy. But in this debate, we can actually look to one of history’s biggest proponents of urban automobiles for guidance. New York’s most complicated character, Robert Moses, despite all his many faults, shrewdly understood the importance of parks, famously noting “as long as you're on the side of the parks, you're on the side of the angels; you can't lose.” Indeed, a recent Transportation Alternatives survey found that 84% of New Yorkers support more space for children to play, and 83% support more trees and greenery, even if either would mean less parking.

Ironically, Moses’ work of slicing and dicing our city over the 20th century has left us with a built environment where the predominant urban feature is parking, not parks. But the point behind this message is to think about what we gain, not what we lose. In the next decade, as autonomous vehicles begin to rise and as reforms like residential parking permits and congestion pricing take shape, we’ll ultimately see a decreasing demand for private car storage. How we reclaim and make use of our public space will be the defining issue of our city’s next chapter – and starting with parks means that we’re starting off on the right foot.