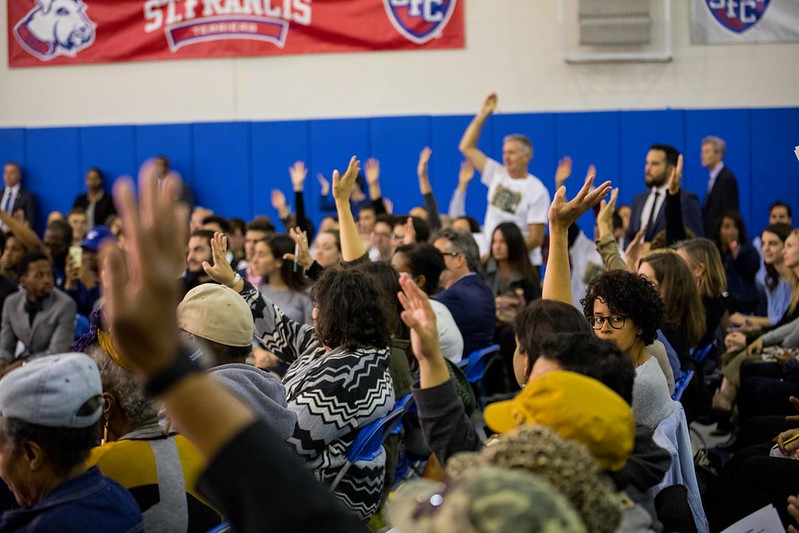 New York City is virtually the only major city in this country that does not have a comprehensive city plan. Instead, we rely on a piecemeal approach to zoning that has resulted in an explosion of luxury towers without anywhere near adequate gains in real affordable housing.

Our siloed zoning approach has allowed inequity to flourish. Black and brown neighborhoods have shouldered the lion's share of new real estate development, which has led to rampant gentrification and displacement.

Arguably, the most urgent reason to adopt a city plan is the climate crisis. Considering that by the year 2100 daily high tides will flood many coastal neighborhoods, it’s hard to imagine that we can combat the climate crisis without a comprehensive plan.

For these reasons and more, it’s clear we need a city plan, yet Planning Together has several fundamental flaws. The most urgent flaw of this legislation is its top-down approach — it misses the opportunity to give the people more power in determining a just and equitable future.

In the first year of each 10-year planning cycle, every community board submits a district needs statement. In the second year, the city creates a “conditions of the city” report based on 13 categories. The categories of assessment will please many planners and organizers, as it includes a “displacement risk index” and a “segregation assessment.”

City leaders who point to these first two years as evidence of community buy-in are missing one crucial point — there is no formal requirement in the legislation to act on the information gathered from the first two years. We don’t just need more information, we need action. Without requiring interventions, it’s easy to see how real estate interests could corrupt the process.

In the third year of the planning cycle, the Office of Long Term Planning and Sustainability (OLTPS) would create three plans per district and present them to community boards and borough presidents. Let that sink in: Planning Together places the responsibility of community planning with an unelected mayoral agency instead of with the communities themselves. Community members are closest to both the unique problems and the most viable solutions in any given neighborhood. Any comprehensive planning legislation should recognize this and take a true bottom-up approach.

There are several changes to the legislation and related issues that should be made to ensure communities can fully engage in planning:

First, fully fund community boards. Currently, the combined budget of all community boards is a meager .02% of the total city budget. This lack of funding poses a major impediment to boards that may otherwise consider engaging in community planning.

Second, adequately staff community boards. Volunteer board members with full-time jobs and/or household duties cannot be expected to create a community plan. All boards should be appropriately staffed and include full-time urban planners.

Third, ensure community plans that are created have teeth and get implemented. Section 197a of the city charter allows community boards to create plans to guide development in their district. Yet, under our current system, community planning is often an exercise in futility; boards sometimes take years to compose a plan only for the city to ignore or reject it. Even when a plan is approved, implementation is not guaranteed. We cannot allow a mayoral agency to override community plans when they are created.

In Planning Together, after the OLTPS creates land use scenarios, community boards and borough presidents vote on which plan they like best. Unfortunately, these votes are in an advisory capacity. The city can move forward with whichever plan it chooses, regardless of the community decision. This (im)balance of power needs to be radically shifted to give communities the central voice in the process.

After the community board and borough president response, the City Council deliberates. Yet the balance of power between the legislative and executive branches is skewed as well. The legislation states: “if the Council failed to adopt a preferred scenario, OLTPS would choose a scenario and describe how such selection was made.” City Council members are much closer to communities than the OLTPS, so transferring power from the legislative branch to an executive agency takes away essential accountability.

Throughout the 10-year cycle, Planning Together lacks a comprehensive framework around public engagement. Our current system is entirely insufficient in ensuring community voices are heard. Case in point: the public hearing for Planning Together itself.

The meeting started at 10 a.m. on a Tuesday, when many New Yorkers were working. City officials were placed at the top of the agenda, and it took nearly five hours before testimony from other New Yorkers began. By the time public testimony began, many government officials had left the meeting. To make a comment, you had to sign up in advance, creating another barrier to entry for many citizens. Testimony was kept to a strict two-minute time frame. These factors prevented the opportunity for real dialogue

City planning is essential, and it is clear we cannot continue our current approach. Yet if we are truly to build the just and equitable city that works for all, New Yorkers need the central voice. Involving New Yorkers without becoming paralyzed by not-in-my-backyard (NIMBY) forces is not an easy balance to strike. Yet, we cannot allow our fear of NIMBYism to justify a top-down approach. I urge the City Council to radically amend this plan to ensure greater community control.

***
Aleda Gagarin is a City Council candidate for District 29 in Queens, which covers Forest Hills, Kew Gardens, Rego Park and Richmond Hill, with a Master’s in Urban Planning from CUNY-Hunter College. On Twitter @AledaGagarin.