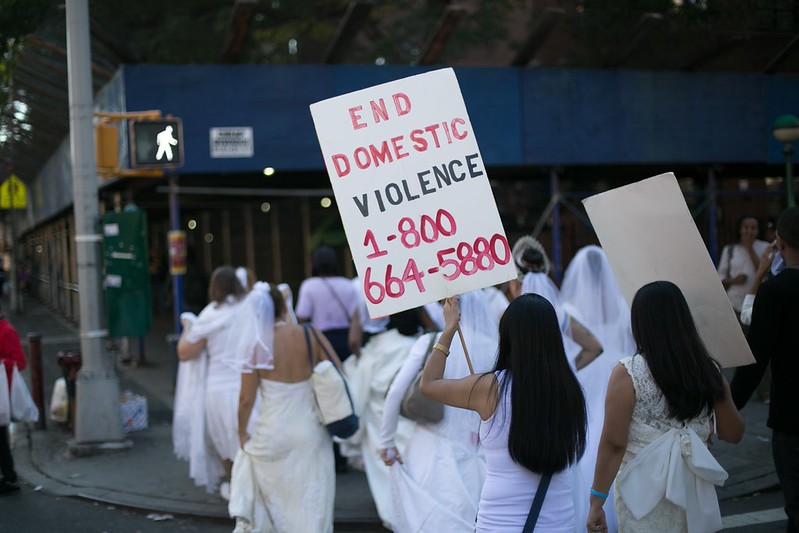 As President Biden begins to make good on his promise to reverse some of the Trump Administration’s most heinous immigration policies, I welcome the changes but hope he is able to dig deeper. Because for every horrific Trump Administration immigration policy that was announced and grabbed headlines, there were others that were discreetly implemented, effectively creating an “invisible wall.”

These more subtle shifts in policy have been devastating, and unfortunately, only become obvious to the public after thousands have already been impacted. A particularly unjust one impacts domestic violence survivors like me.

Born and raised in the Caribbean in Kingston, Jamaica, I immigrated to the U.S. in 1998 and have lived here in New York City since. A single mother to my daughter, a natural-born U.S. citizen who is now age 13, I work as a home health aide and am also a certified chaplain of my church, after graduating with a bachelor's degree in theology.

But this part of my story began in 2009. I started dating someone and it was going well in the beginning. But then he began to behave in ways that made me not trust him and so I tried to end the relationship. He would not leave me alone until he convinced me to meet up with him at a hotel one day. That is when he raped me.

My world was shattered. I was terrified of him but even more terrified of reporting this crime to law enforcement because of my immigration status. He was a U.S. citizen and he knew I was undocumented. I only told one person, a family friend.

Then in early 2011, the father of my daughter, Keith*, threatened to shoot me during an argument we had. Fearing he really had a gun, I grabbed my cell phone and called the police. By the time the police arrived, Keith had fled the apartment we shared, and so the officers asked some questions but left without filling out a police report. The next morning, however, the same officers returned to arrest me because Keith had filed a report accusing me of assaulting him—with the cell phone I used to call the police when he threatened me! I ended up being charged with assault with a weapon. I had to appear in court a couple of times but the case was ultimately dismissed as Keith did not appear. The records were then sealed.

I tried to move on with my life until one day, later that year, I got a call from my sister, who mentioned that she saw in the news that someone we both knew was arrested and charged with several counts of rape. She said she did not believe it was true and so I opened up to her—I told her I knew it was true because he did the same to me.

With my sister’s encouragement, I came forward to the detective handling the case and reported the crime committed against me. That’s when I learned I should be able to get humanitarian immigration help as a crime victim.

I was introduced to Safe Horizon, a non-profit organization, by the detective. At this point, fear and paranoia took over since my rapist knew where I lived and my immigration status. I received counseling from Safe Horizon and its Immigration Law Project attorneys helped me apply for legal status in the U.S. through the U visa program.

This special visa is available to victims of certain serious crimes who are helpful to law enforcement in the investigation or prosecution of the crime. I applied in 2012 and I was granted a U visa in 2013, which allowed me to live and work in the United States lawfully, and three years later, to apply for permanent residence, or a “green card.” In 2017, again with the assistance of the Immigration Law Project, I submitted my application for a green card.

I was shocked to receive a request from the Department of Homeland Security (DHS) for details about my arrest in 2011, even though I had already disclosed my arrest in my U visa application and explained that the records were sealed. DHS demanded unsealing of the records to determine what kind of weapon was involved and whether I was indeed a threat to public safety.

According to my attorneys, this was a noticeable shift from previous DHS policy. Before the Trump Administration, DHS would not demand unsealing of records because arrests that resulted in dismissed charges and/or sealed records typically did not warrant additional scrutiny. Moreover, sealing statutes, such as the one in New York, are designed to protect individuals in situations like mine. It allows us to essentially start over without the stigma that usually comes with an arrest. My attorneys refused to ask for unsealing of the records. Consequently, my “green card” application was denied.

My heart sank. My work permit was also denied, which has impacted me severely, especially during this pandemic as I struggle to keep a roof over my family’s head. I feel victimized all over again. And I am not the only one. Sadly, I learned that countless others like me have suffered similar fates—domestic violence survivors falsely accused by their abusers have had their U visa or “green card” applications denied.

My attorney helped me file an appeal, which was dismissed, and then a motion to reconsider, which is currently pending. They have also demanded that DHS turn over any records related to this unannounced shift in policy.

Awaiting the outcome, I hope that the Biden Administration will step in and protect domestic violence survivors. I hope that my story sheds light on this invisible policy change and that it finall y comes to an end.