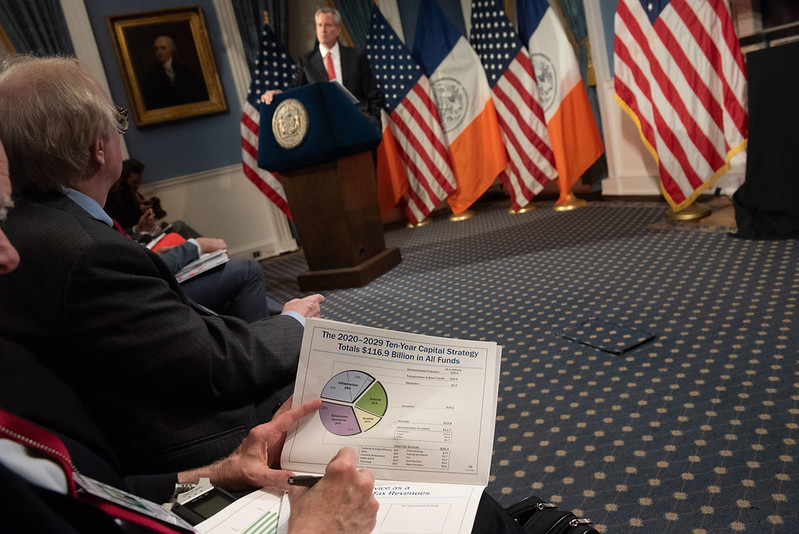 Of the endless forums that are being held in the mayoral primary race, the only one that has specifically focused on the City’s fiscal situation and budget was the one last week held by the Citizens Budget Commission, my former organization. (You can watch it here, or read Gotham Gazette’s detailed summary here.)

The event, with candidates appearing one by one, revealed a range of reactions to the fiscal challenge one of them will likely find him/herself tasked with solving when they take office in January. Some candidates seem not to understand the problem, others don’t take it seriously, and still others may understand it but don’t want to really talk about it.

One can only hope that the main question CBC President Andrew Rein posed to each of the eight candidates will cause them to think in greater detail about how they will deal with the budget if elected. He asked:

If you take office next January, you will have about three weeks to submit a preliminary budget for fiscal year 2022-23 to the City Council. With a deficit now projected at $5 billion that could well grow, how will you balance the budget? What combination of spending cuts and revenue increases will you propose?

Maya Wiley made what turned out to be a standard, generic claim that there is lots of waste to be eliminated and said that she would ask agencies for cuts of 3% and work with labor to achieve personnel cost savings. But instead of balancing the budget she chose to talk about her plan to invest an additional $2 billion in capital spending to create 100,000 jobs, as if that would make the rest of the $5 billion deficit go away.

Kathryn Garcia also cited agency savings as a major way to reduce the deficit and said she would ask for agency reductions of 3-5% but could see cutting as much as 10% from some agencies, for example, by combining redundant IT services. But she decried the cuts Mayor de Blasio imposed on the Department of Sanitation, which she led until resigning last year to run to replace him, such as the termination of curbside residential compost collection. This was in fact a wise decision by the mayor, since the program has been little used and extremely expensive. If programs that are not cost effective cannot be closed (or at least postponed) what will Garcia do as mayor when her agency heads protest cuts of programs they care about? Every program has a constituency.

Andrew Yang seemed to understand the magnitude and urgency of the deficit challenge but he offered more of a mélange of various long-shot ideas than an organized plan. He spoke about the need to reduce headcount through attrition. He also offered some long-time CBC recommendations such as requiring employee contributions to health care benefits, and getting nonprofits to pay real estate taxes on some of the property they own. Does he really have plans to implement these or will he back track on them when they are met with opposition? Can he show how they total $5 billion?

Meanwhile, Yang also acknowledged that his plan to provide families with cash payments will be expensive; he said philanthropy would partner with the city to finance half the initially $1 billion program (unlikely; the last time private philanthropy gave as much as $500 million to one initiative in New York City was just after September 11, 2001) and indicated that somehow calling the payments “borough bucks” and getting recipients to spend in local small businesses would offset some of the cost.

Yang said that reform of the property tax system is sorely needed and that while it would not help with city finances short-term, it would unlock value in the billions over the long-term. If the system were truly reformed to reduce the misallocation of value between and within property classes, it would surely be more fair and rational, which might, over the long-term have a positive effect on overall development, but the damage to real estate value due to covid could take years to overcome.

Dianne Morales made it clear that balancing the budget is not a topic that influences her thinking. She didn’t address Rein’s question but instead decried the concept of austerity (though neither Rein nor anyone else used that word), said she would cut the budgets of the police, correction, and perhaps children’s services departments but would re-invest the savings in other city jobs and community investment. Like several candidates, she generally criticized the number and size of city consulting contracts. She supports several state tax increases and a land value tax, but gave no numbers for any of her proposals, on the spending or revenue side.

Eric Adams had some concrete proposals and figures. He called for personnel attrition, which he estimates would save $1.5 billion a year after a two-year hiring freeze, and would also require agency savings of 3-5%. Once again, contract spending was cited as an opportunity for savings; he would appoint a contract efficiency czar. Neither Adams, nor any of the others who called for savings in the contracting process, gave an estimate of how much money this would save. He also wants to control police overtime, which is a perennial in mayoral budget proposals but never achieved.

There is no way Adams’ savings plans would add up to $5 billion so he has tax proposals, i.e. a two-year temporary surcharge on incomes of $5 million or more and a tax on social media data collection. If the $1-2 billion these would raise a year is used to fund operating costs including his plan to open public schools year-round, there is clearly the possibility that the surcharge would not be temporary.

Ray McGuire had a theme that sidestepped the deficit-closing question from the opposite end of the spectrum from Morales. He said we cannot cut and/or tax our way out of the financial predicament. He says we must grow our way out by incentivizing and helping economic growth through spending proposals, i.e. wage subsidies for small businesses and suspension of sales taxes as well as free license renewals. He did, at least, have an estimate for the cost of the subsidies, which, at $900 million over two years, might be on the low side. He also referred to the need for personnel attrition, pension reforms, 5% agency savings, and collaboration on savings with labor. There is no question that the city needs to grow its way to fiscal health over the long run, but that will depend on the extent to which the economy bounces back after the pandemic and on many factors outside the control of municipal government. And no matter how robust the recovery it won’t enable the mayor to present a balanced budget in January 2022.

For a public official who has been directly involved with city finances for years, Scott Stringer was vague about how he would balance the budget – no doubt purposely so. He asserted that his experience as comptroller makes him the best positioned to take the needed actions, but was short on specifics, repeating calls for contract savings and curbing waste in city agencies, citing the Department of Education in particular. But he didn’t estimate how much his proposals would save. Unlike others who called for reducing personnel through attrition, he said he thinks the current city headcount (20,000 more than when de Blasio took office) is appropriate but he is also in favor of early retirement incentives that would drive up pension costs and, if the retirees are replaced to keep up headcount, would not save much in the short-term.

Finally Shaun Donovan had many specific fiscal ideas, but most had no concrete dollar values attached. Moreover, he seems to misunderstand or miscalculate some of the topics he discussed. He made a point of strongly opposing layoffs or borrowing for operating expenses but the mayor has dropped these from his budget plans. Like Andrew Yang and Eric Adams, he called for property tax reform but did not claim it would generate revenue; he is in favor of a pied-a-terre tax and a high-income surcharge. And like all the candidates he is for agency savings, contract efficiency, and working with labor to achieve productivity savings. He also suggested a CBC favorite: consolidating public employee union benefit funds.

Donovan presented value capture as a key revenue-raiser. He spoke of congestion pricing, not seeming to realize that the money from this, once implemented, is already built into the MTA’s capital budget and is not controlled by the mayor. He cited the financing of Hudson Yards as an example of a way to generate more revenue, seemingly not recognizing that it took six years for the area to generate enough revenue to pay its own debt service. More projects that ‘capture value’ to finance development will divert, not generate, revenue for the city. If he has specific value capture projects in mind to add to the city’s coffers he did not offer them.

He was perhaps most misguided in his firm belief that there will be multi-year federal aid to cover city deficits. It is a hard-fought battle for the president and Congress to get immediate state and local aid in the pending covid relief bill; further support certainly cannot and should not be relied upon as a way to sustainably balance the city’s budget.

All of the candidates have been participating in forums covering an array of topics, from homelessness and housing to criminal justice and climate change, promising all kinds of new, expansive and expensive programs. Voters should be concerned about how realistic these campaign promises really are and which of the candidates understand the difference between aspiration and governing. More probing questions about fiscal management, by the media and the public, are needed.