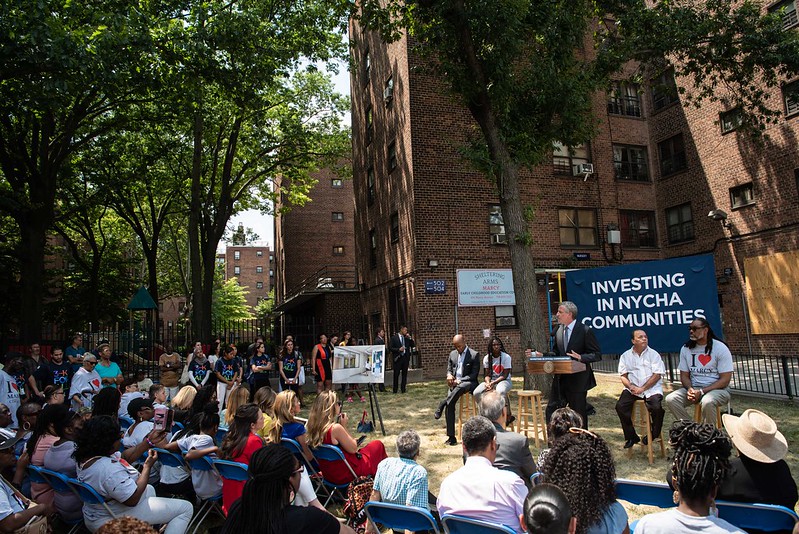 We all know the story of deplorable living conditions and general dysfunction. Many of us were captivated by details of the wreckage and the shocking level of disrepair. We sympathized with the residents, but scratched our heads wondering what level of madness allowed such unnecessary suffering when there were ample means to alleviate it.

Although this describes the Grey Gardens of East Hampton, which became infamous in the 1970s and was depicted in films and a Broadway musical, it also describes something seemingly quite different. That is the approximately 170,000 public housing residences in New York City owned and operated by the New York City Housing Authority (NYCHA) and the official home to approximately 381,000 New Yorkers — what I call the urban Grey Gardens.

Both involve a need for massive repairs, but also the possession of sufficient resources to pay for them. While the owners of the Hamptons’ Grey Gardens, Edith Bouvier Beale and her daughter (the aunt and first cousin of Jacqueline Kennedy Onassis), may have had family wealth in the form of stocks, bonds, and other assets, NYCHA has significant wealth in the form of land in one of the most expensive real estate markets in the world.

How much land? 2,473 acres (almost four square miles). How is it using that land? Less intensively and effectively than much privately-owned land that houses wealthier New Yorkers. The Skyscraper Museum has calculated the density of various housing developments. London Terrace in the Manhattan neighborhood of Chelsea houses 931 people per acre. Manhattan House on the Upper East Side houses 478 people per acre. NYCHA houses 154 people per acre. Clearly many New Yorkers can and do live perfectly well with much greater density than currently exists in NYCHA housing.

Increasing the density of NYCHA’s developments to the average density of London Terrace and Manhattan House would add housing for over 1.3 million people. With an average household size in New York City of 2.42 people, that would translate into approximately 537,000 new apartments. It would not take much imagination to achieve this increased density by more efficiently using NYCHA properties which often include dead zones, unused open space, and surface parking lots.

How much money could the new apartments bring in? Various configurations would raise $32 billion – roughly the full estimated amount NYCHA needs to address all of its unmet capital repair and upgrade needs. For example, making half of the new apartments affordable yielding zero profit and the other half market rate yielding a profit of $120,000 each, a modest profit for a builder in New York that incurs no cost for land, would raise the full $32 billion. NYCHA, like the owners of Grey Gardens, has the assets to address all of its needs without any contribution from taxpayers or stressed government budgets.

The new housing could also be used to provide another benefit: greater diversity. NYCHA housing is by definition reserved for people with low incomes. Government officials who regularly and enthusiastically talk about diversity seem to miss the irony that the one area of housing they completely control is among the least diverse in the city. Building new residences on NYCHA owned land could bring more economic and racial diversity to neighborhoods and provide the additional benefit of helping to reduce segregation in New York City’s public schools.

The government could even go so far as to diversify individual buildings. It could provide NYCHA tenants the option, if they wanted, to move to apartments in the new buildings at their existing rents or to receive vouchers for housing of their choice elsewhere in the city paid for by the free market rents earned on their newly renovated units. Either way, no affordable units would be lost (in fact, many could be gained), buildings would be diversified and new life brought to these communities.