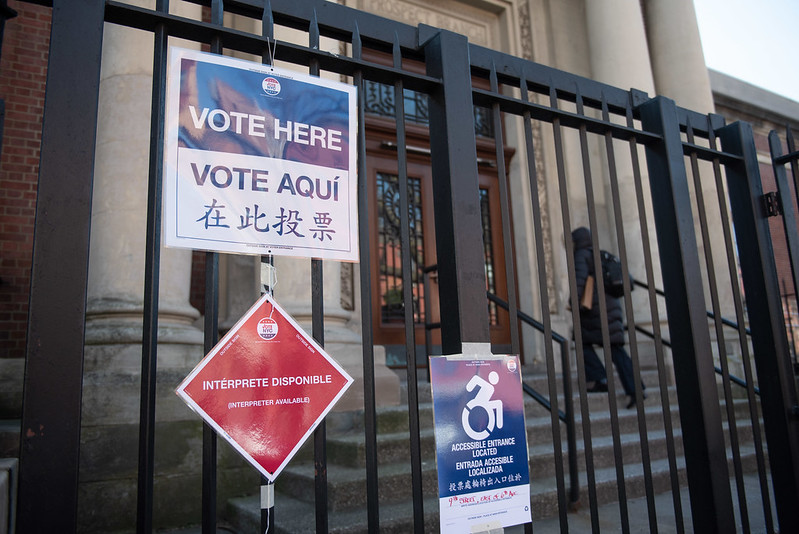 Voting rights and social justice advocates are counting on legislative supermajorities in Albany to begin tackling a long ignored civil rights imperative, reform of New York’s racist Civil War-era blanket voter disenfranchisement law, which strips citizens of their right to vote while in prison or on parole for a felony conviction, regardless of the nature or circumstances of the offense.

For the first time since the early 1970s, the New York State Legislature has begun to grapple with that legacy. The State Senate recently passed incremental legislation to restore voting rights to citizens on parole, and the state Assembly is poised to do the same soon.

The policy shift is a decades-long priority of voting rights groups who penned a letter to state leaders about rights restoration ahead of the 2021 legislative session. At the federal level, New York Rep. Jerry Nadler’s Democracy Restoration Act would set this standard nationally for federal elections.

Around 36,000 people are on parole in New York, nearly three-quarters of whom are non-white. A 2020 Columbia University Justice Labs Report concluded that “the impact of current parole practices in New York falls disproportionately on Black and brown communities.”

Governor Cuomo mitigated this in 2018 by signing an Executive Order, a mechanical but meandering stopgap of rolling voting-rights-only pardons. With notable exceptions, rights are restored. However, the process takes several weeks and is disconnected from voter registration (New York’s deadline is still 25 days before an election). It is no substitute for updating the law.

The legislative fix creates a bright-line policy that is easier for election officials to administer, cuts government red tape, and harmonizes the rules so citizens serving out parole in their communities can register to vote, just as New Yorkers on probation presently can.

Voting rights restoration is an impactful step in the right direction. But in light of the historical record and contemporary racial and political impact, New York must be the place where lawmakers feel compelled to drag the United States into modernity.

While a national reckoning with the ongoing legitimacy and wisdom of disenfranchisement policy has been slowly brewing, the racially-motivated proliferation of these laws—intertwined as they are with the systemic marginalization of minorities—has yet to generate the cultural outrage needed to render their perpetuation intolerable and spur real action.

New York is one of 48 states that impose a disenfranchisement policy as a collateral consequence of all or almost all felony convictions, regardless of the nature of the offense and without consideration or review by a judge. Meanwhile, Americans convicted of felonies in Maine, Vermont, or Washington DC retain the right to vote during incarceration.

From a national perspective, this makes the right to vote in the United States startlingly elastic. Internationally, U.S. policies violate norms of proportionality set decades ago by the European Court of Human Rights and are a clear outlier in scale and scope compared to the practice in other modern democracies like Canada, Israel, South Africa, Australia, and New Zealand.

In 2020, the combination of mass incarceration and disenfranchisement policy excluded an estimated 5.2 million Americans from voting, three-quarters of whom have already completed their prison term and are living in our communities. The blunt application to all felonies makes the penalty indiscriminate and yet the impact is unjustly disproportionate—nationally, one in 16 voting age African-Americans were reportedly disenfranchised, a rate 3.7 times greater than that of other Americans. In Florida and six other states, more than one-in-seven African-Americans remain disenfranchised. Over 20% of Americans disenfranchised are women. When combined with other barriers to voter access (and gerrymandering), how dramaticall y does this contort political power?

Disenfranchisement isn’t merely a vestige of Jim Crow in New York, but actually more of an enduring centerpiece of the backlash that also occurred in northern states with larger Black populations after the Fifteenth Amendment prohibited racial discrimination in voting. Sadly, much as delegates intended when they entrenched mandatory disenfranchisement for infamous crimes in the New York Constitution 150 years ago, its legacy operates with disparate racial impact to this day, stigmatizing individuals and perpetuating a ripple effect that marginalizes communities.

The policy is part of a national stain. Course-correcting it requires more than incremental fixes. A rising generation of New York lawmakers are increasingly likely to agree but that’s yet to meaningfully shift the debate. Politicians called to public service to right historical wrongs and pursue social justice must reevaluate this serious punishment through a modern lens focused on fundamental rights and familiar rule-of-law principles like proportionality and judicial oversight.

One option is not to disenfranchise Americans at all, as State Senator Kevin Parker has proposed. But if our criminal justice system will continue disenfranchising citizens convicted of crimes, today’s blanket penalty should be reformed to bear some relationship with the nature of the offense, rather than the length of sentence (it often lasts longer in many states).

Lawmakers can draw inspiration from the civil rights norms arising out of Article 25 of the International Covenant on Civil and Political Rights (ICCPR), which the U.S. ratified decades ago. A pro-voter framework in a modern democracy ensures voting rights remains the rule rather than the exception. That needs rebalancing. Yet disenfranchisement can be reasonable where it is imposed by law or at the discretion of a judge for a limited time, to redress serious offenses against our democracy, like crimes with a nexus to elections, public corruption, abuses of power, treason or terrorism.

The blanket policies in place now are both overinclusive and underinclusive, sweeping in almost all citizens convicted of felonies unrelated to these interests while sparing those convicted of lesser crimes that may directly implicate them, or better-resourced persons who do less time.

The modern disproportionate racial impact requires us to address these policies’ racist origins. To better serve the interests of justice and protect civil rights, Americans should demand uniform rules of specific and proportional application and automatic rights restoration upon release. New York can and must take a significant step forward this month.

***
Jarret Berg is a New York attorney and the Co-Founder of VoteEarlyNY. On Twitter @JarretBerg.