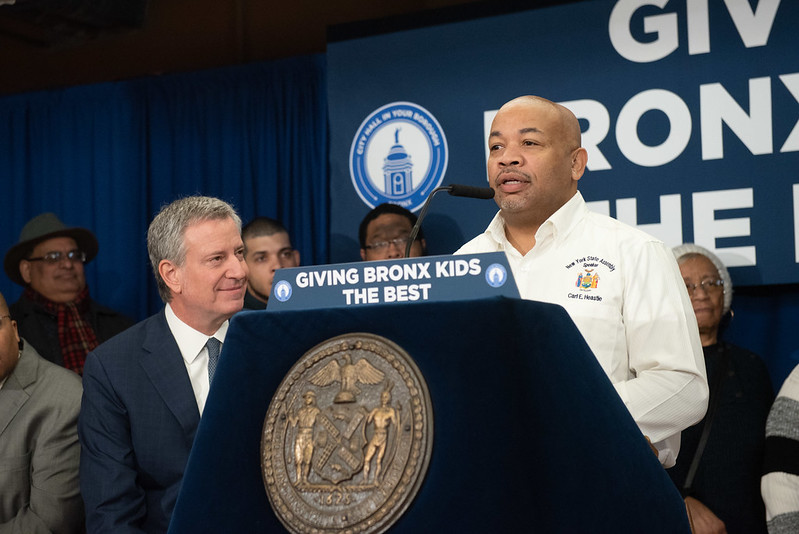 I’ve lived in The Bronx all my life — and all my life, our political leaders have hung our borough out to dry.

For as long as I can remember, being from The Bronx meant going to underfunded schools, surviving in food deserts, and living in overcrowded homes or crumbling NYCHA units. None of these conditions are inevitable; rather, they’re the outcome of negligence and disinvestment by lawmakers. The people of The Bronx deserve better. Assembly Speaker Carl Heastie: to deliver justice for your neighbors in The Bronx, it’s time to end tax breaks for the rich and invest in our New York.

Over the last century, a procession of politicians have made policy decisions that actively hurt the Black and brown majority of our borough, from building the Cross Bronx Expressway straight through our communities to redlining our neighborhoods. These choices led to a generational poverty that requires intentional investment — in education, in jobs, in housing — to correct. And yet, it’s 2021, and this legacy of disinvestment is as strong as ever. Tens of thousands of Bronx residents live in failing public housing; countless others are chronically rent-burdened, on the brink of eviction, or already homeless. Our schools, which serve our majority Black and brown children, are deeply underfunded. And we suffer one of the highest rates of food insecurity in the entire country.

COVID-19 made it all worse. Over 17% of Bronx residents are currently unemployed — the highest rate in the state — even as employment rates rebound statewide. Such high joblessness is a dangerous spark, setting off disruption after disruption: hungry families, people kicked off their health insurance, families evicted from their homes, and troubling child poverty. This endless cycle is fundamentally a policy failure, not a matter of millions of low-income Bronxites failing to pull themselves up by their bootstraps. And yet, in essence our leaders continue to throw up their hands as if there’s nothing they can do.

Speaker Heastie, as a longtime constituent in your district, I’m appealing to you directly: The Bronx needs tens of billions in dollars in new revenue to end this senseless suffering. That’s the kind of investment it will take to create hundreds of thousands of well-paying jobs; to finally give our children the education they need to succeed; to stop the cycle of poverty that housing insecurity creates.

To raise the funds needed to finally invest in The Bronx, we must end tax breaks on the rich. Right now, New York’s wealthiest residents enjoy enormous, unearned tax breaks on their wealth and incomes, their luxury cars and properties, and even on the corporations they own. That’s the kind of backwards policy that lets the rich get richer while The Bronx stays poor. And this year, it’s the policy that has let billionaires accumulate over $80 billion during a global pandemic while your neighbors are still out of work.

The six bills in the Invest in Our New York Act are the clear solution. By reversing these unfair tax breaks on the richest among us, New York can finally stop balancing its state budget on the backs of Black, brown, immigrant, and working class people. By passing these bills, we can fully fund our schools, hospitals, and housing. And just as disinvestment has a negative ripple effect, investment will have a positive one. Fully funding our schools will mean more opportunities for young people in The Bronx. Accessible healthy food will mean fewer comorbidities. Functional public transport will mean Bronxites can afford to travel to good jobs anywhere in the city.

Speaker Heastie: you know as well as I do that if we fail to raise this revenue by ending tax breaks for the rich, it’ll be communities like ours in The Bronx that will suffer. Property taxes will go up for homeowners; the budgets of life-saving services — from food pantries to drug harm reduction services — will be cut; unemployment will stay high. And all the while, the systemic inequality that leads to all of this pain in the first place will go unsolved.

As a lifelong Bronxite and a dedicated community activist, I have seen a lot of injustice in my time. But over the past year, I have also been hopeful that a new day for the Bronx is around the corner. From Pelham to the South Bronx, residents from all walks of life are coming together to demand more from our elected officials. The Governor is exceptionally weak, and we have a unique moment now to deliver for The Bronx. Progressive rhetoric is not enough.

We know you, as our legislative leadership, have more power than ever. As you are about to propose the Assembly’s budget for the next fiscal year, we turn to you: pass the Invest in Our New York Act and delive r the future that the Bronx deserves.

***
Curtis Robinson is an activist and life-long resident of Assembly Speaker Carl Heastie’s district in the Bronx.