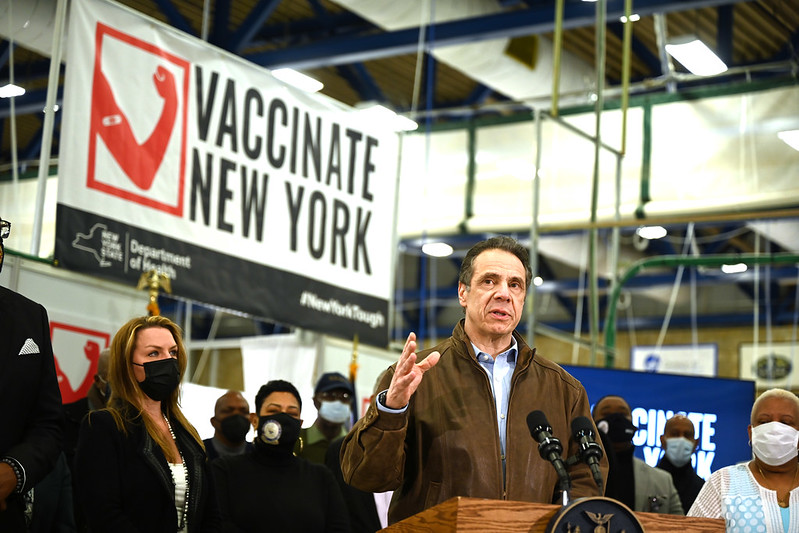 Governor Cuomo seems to be letting his political scandals get the best of his judgement. Last Thursday, he announced sports stadiums and outdoor concerts can resume on a limited basis in April, even as New York State books more than 6,700 new cases each day. That is 6,000 more cases per day than we were registering at our lowest point last summer. Combined with his decision to increase indoor dining capacity, the governor’s move simply invites the virus and all its variants to infect more New Yorkers before the vaccine reaches enough people.

Despite all the talk of optimism, the situation remains serious and concerning. With new more-contagious variants spreading, the risk of another wave of infections exponentially rises each time we allow more people to gather. Even if people are vaccinated and tested at the door of stadiums and concerts, the virus can still spread, especially if new variants emerge that are less detectable or resistant to the vaccine. Our likely long-term endgame in that scenario – the one we need to avoid – is an endemic virus that mutates chased by vaccines that statistically reduce but do not eliminate the pandemic.

Governor Cuomo’s decisions, taken together with disastrous moves by Governors Desantis in Florida and Abbott in Texas, underscore why the United States always seems to be one step behind COVID-19 - cycling through a Groundhog Day-like pattern of opening, closing, and reopening again. Lawmakers impose restrictions when hospitalizations and infections rise. They lift those restrictions when metrics fall. Then - having allowed another crisis to mount - they’re forced to put those same restrictions back in place. This is unacceptable, and it doesn’t have to be this way.

By contrast, places like Australia, New Zealand, Vietnam, and Atlantic Canada have all returned to a sense of normalcy, mostly because they began taking aggressive steps before infections and hospitalizations got so far out of control.

Australia, for instance, has confined outbreaks by restricting inter-state travel among its eight states. In some cases, such as Melbourne in September and Sydney in December, travel restrictions were imposed within a city. This has at times been difficult for the 25 million Australians. But today, as the United States infection rate remains stubbornly high, Australia’s daily new case count is miniscule, averaging less than 11 new cases in the last week.

For the U.S. to change course for the better, we need to reset and choose to resemble Australia’s approach. That means doubling down on actions that stop community spread for a short period of time, providing space for vaccines to take hold and then re-opening in a targeted fashion.

The concept is simple: endure five weeks of stay-at-home orders now to save lives and put us in a position to reopen our economy as soon as possible. It means allowing only minimal essential services and mandating transmission prevention protocols like delivery, curbside pickup, mask wearing, air purification, and disinfection. It also means rigorous travel restrictions and 14-day traveler quarantines to prevent COVID-19 from crossing borders. The smaller the area, the faster the process of getting to zero. Testing, vaccinations, and mask-wearing remain critical, but they should not be the sole emphasis.

I know there is a political desire to start making people feel good about gathering in large number s again. But neither politics nor wishful thinking should drive our pandemic decisions. It is this mentality that has dug us into a hell of our own creation. The only way we beat the virus is by using vaccinating and simultaneously imposing stay-at-home orders and travel restrictions to end transmission and stop variants from emerging. This is the fastest route back to normal. If New York does it, the rest of the world will follow.

***
Dr. Yaneer Bar-Yam is the founding president of the New England Complex Systems Institute, where he is an expert on pandemics and other complex systems. He is spearheading the effort of over 3,000 volunteers working to stop the outbreak at endcoronavirus.org. On Twitter at @yaneerbaryam.