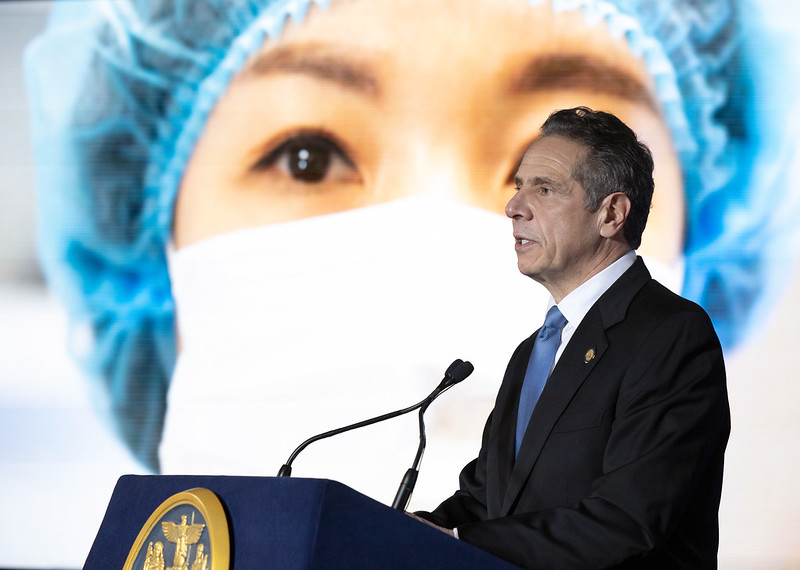 Predatory behavior by powerful men towards women takes many forms. Flirting, demeaning, suppressing, touching, and more, are all manifestations of toxic male behavior that is too often normalized, even in some cases expected, by men in powerful positions. Clinton, Trump, Spitzer, Weiner, Schneiderman, and now, Cuomo — all male political titans who have faced allegations of sexual misconduct while holding high elected office.

Sadly, only a small fraction of sexual misconduct that takes place in and around the workplace, whether in politics or any other industry, makes it into the news. The media covers a story when it involves a high-profile man, but the vast majority of those incidents that are reported never end up with more than a slap on the offending man’s wrist and workplace seminars on office culture. Women, on the other hand, often lose their jobs, or decide they must leave, because of the trauma inflicted. When they come forward, they are shamed and harassed even more. Many are silenced via settlements, often having to make very difficult decisions under enormous pressure after suffering abuse.

Women leaders marry or start a family, as I did, and lose their jobs. When they keep them, they often lose power within their jobs because of how men respond to the change in women’s personal lives. They are denied equity in companies that they build, as I was, simply because male stakeholders value them less. Another Women’s History Month came and went, and women are no better off than we were before COVID-19. In fact we are falling even farther behind. It’s long past time to pull back the curtain and curb all patterns of abuse and privilege, because non-sexual workplace bias affects more women and is a main driver of gender inequity.

When Andrew Yang fired me from Manhattan GMAT days after I got married, I lost more than my financial livelihood. I had requested an equity stake in both of my salary negotiations and was denied. Yang got what I didn’t, and though I’d taken the founder’s concept and turned it into a multi-million-dollar company, Yang reaped the financial rewards of my sweat equity. Then he used my marriage as the reason he said I’d no longer be a good fit for the company, saying that I would want to focus on my new life and wouldn’t want to work as hard as I had. Andrew Yang also undercut my self-worth and dignity, my long-term potential for financial security, not to mention the toll that it took on a marriage that was only a few days old. I spoke publicly about what happened at a September 2019 public hearing of the New York City Commission on Gender Equity. When asked about my experience as he ran for president, Yang said I didn't have my facts straight, but offered no explanation for how he treated me.

But I am not the only woman to speak out about the way Andrew Yang and entities he has run have mistreated women. A woman who worked for the Manhattan test prep company after I left filed a lawsuit against Yang for pay inequity. Twice The New York Times published articles with credible information about other incidents of pay inequity and discomfort over workplace culture involving Yang. The first article appeared days before he exited the presidential race in February 2020. His record with women was also covered by the Times last month after hiring a political operative who acknowledged the likelihood of truth behind the allegations. In addition, multiple women have reported that Yang perpetuated a toxic atmosphere on the campaign trail. The “bro culture” reportedly traumatized a number of women, at least one of whom turned to mental health therapy to cope with its effect on her.

Most of the women affected by Yang and the workplace cultures he has created and overseen have been silenced via non-disclosure agreements, and the few of us who have spoken out about him publicly have been shamed, called liars, and threatened by Yang supporters. In one example of many, I was told in an email to “get off Andrew Yang’s ass, you entitled bitch,” and this person went on to suggest that I had been useless in the company. Surrogates of Yang on Twitter and Reddit call ed me and others desperate for attention, gold-diggers, stupid, and selfish. As any woman who has spoken out about a powerful man’s bad behavior knows, the abuse takes its toll and is long lasting.

As traumatic as it is, women must keep fighting, not only because of Andrew Cuomo or Andrew Yang, but because institutional biases continue to harm women, especially women of color. We have heard about the toll Cuomo’s abuse took on several young women whose careers were stunted by his behavior. At least one woman working on Yang’s presidential campaign explained how its toxic culture made her question her career path despite past success. Much of it speaks to the larger ‘old boys club’ mentality of politics that we must leave behind.

There is a wide continuum that must be addressed. More structurally, take as an example the decades-long New York City school nurse problem, which I have worked on as a parent and local education leader. Only one-third of school nurses, who are almost all women, are full-time salaried employees with the Department of Education; other nurses are on a waitlist for years to snatch up one of these coveted spots. School nurses employed by the Department of Health are paid hourly with a smaller benefits package and pension. And others are hired out via third-party vendors. Few are paid a true living wage considering the cost of living in the neighborhoods where they serve. The decision-makers who created this unjust structure and those who are in a position to fix it, but haven’t, are almost always men. School nurses are an essential component to the Department of Education, and the women who serve in this role have been disrespected and underpaid for long enough.

Gaps in maternity leave, child care, and elder care, massive and persistent pay and wealth gaps, lack of retirement security, and insufficient work/life balance expectations continue to undermine women in the workplace. Women -- and our male allies -- need to fight for our future because if men keep monopolizing decisions in New York and around the country, current inequities will worsen, leaving another generation of women behind.

As New York reckons with Andrew Cuomo’s abuse and those who have enabled it, as well as many other men in New York politics who have mistreated women, we should also look closely at Andrew Yang’s track record given the position of immense power he is now seeking.

Cuomo should have already heeded the many calls for him to resign over his bad behavior, and we must also say goodbye to the many other men in politics and other industries who abuse women and perpetuate vast gender imbalances. If we are serious about preventing discriminatory workplaces that foster bias against women, we should closely examine workplace patterns among all candidates for elected office. Based on the track record reported by multiple women, calls for Yang to pull out of the mayor's race should follow. We can’t afford any more toxic male leadership.

***
Kim Watkins is a Harlem parent, president of Community Education Council, District 3, a founding member of Parents Supporting Parents, and a Democratic candidate for Manhattan Borough President. On Twitter at @kimwatkinsnyc.