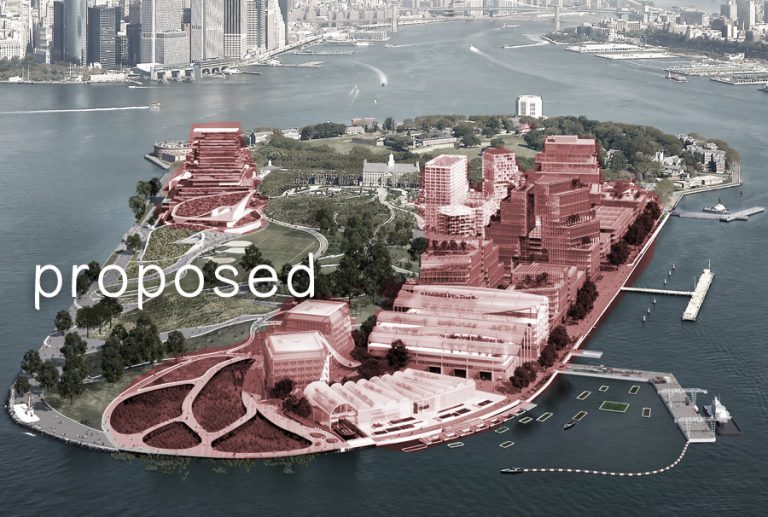 The Friends of Governors Island’s (FGI) main rationale for the proposed Governors Island Rezoning Plan — making Governors Island financially self-sufficient and accessible year round — isn’t supported and doesn’t justify turning the "172-acre oasis" into essentially a backyard for  high-rise, high-density development. Their April 2 op-ed at Gotham Gazette states, "Those of us who love Governors Island know the magic...The things that make this place so beloved are not going anywhere.” But the path the authors support contradicts that statement. Given all that they've contributed to the evolution of Governors Island, it is extremely disappointing to see Friends of Governors Island selling a plan that allows 250-plus-foot-high structures to loom over parklands, a historic district, a school, and urban farmland.

Public Disapproval
There is a strong lack of support for the upzoning from Community Board 1, Borough President Gale Brewer, and several City Planning commissioners. At the April 5 City Council hearing on the plan, 57 testified against, 23 in favor. New Yorkers have a serious need for the welcoming, open, expansive, parkland quality that Governors Island currently provides. The current upzoning proposal must be withdrawn.

The economics
This upzoning won't pay for the Island’s needs, at least not until 2050 according to Friends of Governors Island's partner organization, the Trust for Governors Island's own speculative projections. It would be infinitely more economical to bypass developers and subsidize Governors Island directly. Community Board 1 says the Trust's financial analysis is insufficient. A City Planning commissioner said approval would be akin to the city giving the Trust a blank check for an unspecified project.

Imagined Climate Research Center
Any discussion regarding a climate research center here is irrelevant. This is a proposal to upzone the south island, period. There's nothing legally requiring a climate center tenant and the proposed C4-1 zoning blankets south island. An educational institution lease would only be for 30 years. In fact Governors Island is already productive as a climate hub, thanks to the work of Earth Matter, GrowNYC, Billion Oyster Project, the Harbor School, NYC Audubon, Waterfront Alliance, and others.

"Year-round access”
"Why would I want to go and visit Governors Island if it looks like everywhere else in my city?" - Virginia Ryan, 9 years old.

Privatization
The public will lease the land, but won't developers own what they build? Potential parkland will be privately occupied indefinitely.

Assurances
Trust for Governors Island and Friends of Governors Island: "Of course, there should be guardrails in place, and the zoning should pay special attention to design guidelines."

"Should"? "Guidelines"? This underscores that the Trust can't be relied on to not sell out the island to the de Blasio administration’s economic recovery blitzkrieg of destructive rezonings. Trust for Governors Island Board Chair Alicia Glen has referred to Governors Island as “a nice piece of real estate.”

Buildings
Many solid historic buildings lie unused on the island. Any new building should be kept to minimum and not exceed the four-story height of buildings in the historic district.

Open Space
Most of all the “increased open space” that the Trust for Governors Island is presenting is “woven open space similar to Battery Park City" — boxed in by 10- to 30-story buildings and non-public areas.

"Long-time coming"?
Yes, but the current top-down proposal was sprung on the public just late last September and is being pushed through process during a pandemic in an election year. As Community Board 1 points out the plan "is nearly three times larger than what was considered as part of the 2013 FSGEIS. . .the public’s understanding for the development program was based on those earlier models and the drastic increase in scale of development is unacceptable." Community Board 2 in Brooklyn declined to comment on the Trust’s rezoning plan due to the rushed process.

Public hearings on land use (via ULURP) being held virtually due to COVID-19 are insufficient and should be suspended as is currently the case by court order in on the 960 Franklin Ave rezoning plan, for the proposed mega-project across the street from the Brooklyn Botanical Gardens.