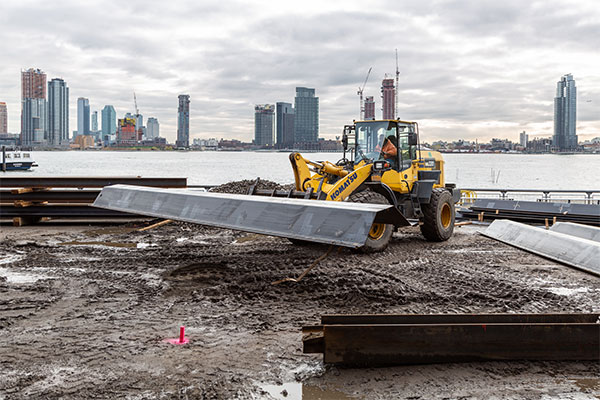 When Hurricane Sandy slammed into New York City—killing 44 New Yorkers and causing $19 billion in damages—it instantly became clear that preparing for stronger storms and rising seas had to become a top priority for our city’s future.

City officials worked across agencies to draw up bold new plans for fortifying our shoreline, with a special focus on those areas that were hardest hit by Sandy. Since then, New York City has invested $20 billion to increase our resiliency to flooding and extreme heat, far outpacing the efforts of any other United States city.

This week, we’re celebrating a major milestone for our climate adaptation efforts as construction crews begin pile-driving for the East Side Coastal Resiliency project. This project will transform 2.4 miles of Manhattan’s waterfront from Montgomery Street to East 25th Street and is considered one of the most ambitious and complex climate adaptation projects anywhere in the world.

ESCR will directly protect more than 110,000 New Yorkers and improve waterfront open spaces in a racially diverse area that has one of the highest concentrations of public housing in the country. This area endured major damage from Sandy: 94% of residents lost power; homes and subway tunnels flooded; and grocery stores, pharmacies, and other essential businesses were closed for days on end.

Around the world, most climate adaptation projects have typically consisted of tide gates constructed in harbors or rivers, far from the communities they’re responsible for protecting. ESCR is different. The constraints posed by Manhattan’s density and geography led us to develop a bold project that will seamlessly traverse an area packed with housing and businesses, dotted with parks, and crisscrossed with subway lines, busy streets, underground utilities, and a major highway.

Catalyzed by hundreds of millions of federal disaster recovery dollars and supplemented by City funds, this project will install new protections and park improvements that will repel floodwaters from future Sandy-like storms for generations to come. Our world-renowned team of planners, architects, and engineers created an innovative design that uses raised parkland, floodwalls, berms, and movable floodgates to create a continuous line of defense.

A raised East River Park is the project’s centerpiece. This park is more than just a line of defense against storms. It’s the crown jewel of Manhattan’s east side; a place where generations of New Yorkers can work, play, and live.

To ensure that we didn’t wall the community off from their waterfront, we focused on creating better access, with new, universally-accessible pedestrian bridges that will create more inviting and inclusive points of entry. The park’s Robert Moses-era design has also been reimagined and improved to include new features and amenities sought by the community, such as new open gathering spaces and step-down areas where visitors can access the East River’s shore.

At the same time, we are making sure that beloved features like ballfields, tennis courts, exercise areas, and a track and field will return with stronger materials and resilient design. We have also meticulously phased construction so that nearly half of East River Park will remain open at all times. These choices directly reflect the voices we heard during our multi-year community engagement process, which involved more than one hundred public meetings, events, and other gatherings.

Cities can’t adapt to climate change overnight. And as long as the world remains addicted to fossil fuels, we’re forced to take aim at a moving target.

The start of this project, however, should offer New Yorkers hope and reassurance. We anticipate that the project will be fully complete by 2025, providing a much-needed sense of security to a neighborhood that’s as populous as the entire city of Albany. We may not be able to prevent the next big storm from coming—but we can act today to prevent damage and bounce back faster than ever.

The threats posed by global warming and extreme weather may be daunting, but New York City won’t back down. We will continue to build our resilience with a mix of creativity, grit, and innovation. New Yorkers deserve nothing less.

***
Jainey Bavishi is the Director of the NYC Mayor’s Office of Resiliency. On Twitt er @jaineytweets & @NYCMayorsOffice.