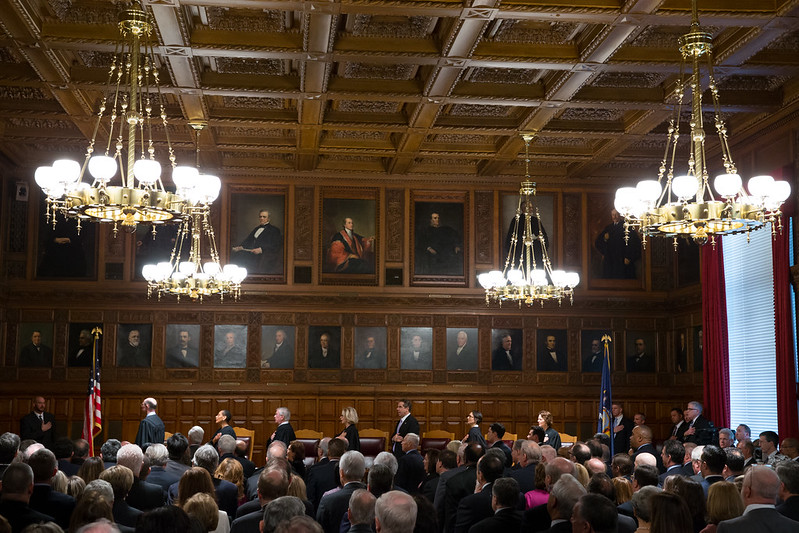 The police murder of George Floyd and the resulting uprisings across the country led New York Governor Andrew Cuomo to try and cast himself as an anti-racist criminal justice reformer. He spoke of the “injustice against minorities in America by the criminal justice system" and emphatically added, “Today...enough is enough.” He signed criminal law legislation and pronounced that the changes “take us one step closer to righting the many injustices minority communities have faced because of a broken and unfair system."

While Cuomo was referring to policing, the criminal legal system is multi-layered and “righting the many injustices” will never occur by only focusing on the police. Police activity is passed through by prosecutors and thereafter subject to review by judges at the trial and appellate levels, and, potentially, by the Court of Appeals, the state’s highest court and the final arbiter of police actions. The courts, too, are instruments of injustice.

While Cuomo’s progressive credentials have long been disputed, little attention has been paid to his impact on New York’s courts. This is a serious mistake. The Court of Appeals is Cuomo’s court. He appointed each one of the court’s seven judges, something that had only happened once before in New York history when his father, Mario, had occasion to select each judge on the court. And although his Court of Appeals is not readily characterized by political labels, one thing is certain — on criminal legal matters it has been overwhelmingly pro-prosecution.

If Cuomo is serious about fixing an “unfair system” laden with injustice, he now has an opportunity to do something about it in this critical arena – the Court of Appeals. With the need to fill three seats on the court by year’s end, Cuomo has the chance to assemble a court dominated by people who have demonstrated firm commitments to protecting people’s rights to be free from overbearing, arbitrary, and racist policing and to rectifying a criminal legal system that regularly turns a blind eye to injustice.

People who have been convicted of a crime can file a criminal leave application (CLA) to individual judges of the Court of Appeals asking for the court to review the legality of their conviction. Grants of these applications from the current slate of judges — meaning a willingness to hear someone’s legal challenge — are down to the lowest point in decades. In 2017, the court granted only 25, or 1.11%, of 2,244 requests. Only two judges, Jenny Rivera and Rowan Wilson, account for far more CLAs than their colleagues. It is not Judges Rivera and Wilson who are out of touch. Their number of grants is in line with what had been the court’s record on CLA grants over previous decades.

Those fortunate few who manage to have their cases reviewed by the court face yet another hurdle: the court’s decisions on criminal appeals reveal indifference and antipathy to the rights of the accused. In 2018, excluding cases where the court issued an unanimous decision, Judge Rivera sided with the accused in 89% of the cases and Judge Wilson in 77%, but the remaining five judges ruled in the accused’s favor only 30%, 25%, 23%, 11%, and 4% of the time. 2018 was not an aberration. In 2017, one of the judges, Michael Garcia, ruled in favor of the prosecution in 100% of the court’s non-unanimous cases, and overall, the court sided with the prosecution in 82% of the cases it reviewed.

Omar Alvarez’s case is a prime example of the Court of Appeals’ willful disregard of the rights of people convicted of crime. When Alvarez was 19 years old, he was charged with and convicted of several violent crimes, including murder, and sentenced to 66 2/3 years to life.  Alvarez filed a motion that alleged his appellate lawyer provided ineffective assistance of counsel. His appellate lawyer waited three years to do anything, and then only acted after learning that the case had been put on the court’s dismissal calendar. The lawyer ultimately filed an appellate brief rife with typos and grammatical errors and devoid of citations to support any legal claims. The lawyer’s statement of the facts contained six lines of text and the entire brief was only 20 double-spaced pages, including separate cover pages and table of contents. The prosecutor’s statement of the facts ran 60 pages, and their entire brief was 175 pages. Further, and most crucial, Alvarez’s appellate attorney inexplicably failed to seek review of the most glaring issue in the case: a de facto life without parole sentence imposed on a teenager.

The Court of Appeals seemingly gave short shrift to the appeal and affirmed the conviction.

In her dissent, Judge Rivera wrote that the brief “violates ever y rule about effective advocacy taught to law students across the country.” She even took the extraordinarily unusual step of attaching a link to the brief for all to see. In his dissent, Judge Wilson referred to the “atrocious quality of appellate counsel’s brief,” and urged that the failure to ask the appellate court to reduce the sentence, by itself, was ineffective assistance of counsel.

Judge Wilson also highlighted the U.S. Supreme Court cases that discuss the reduced culpability of youth. Those cases recognize that the parts of the brain that deal with behavior control are not fully developed until into our 20s, and that, as a result, youth are susceptible to recklessness and impulsivity, are vulnerable to negative influences, and, critically, have the capacity to change.

Judge Wilson also noted a significant fact that the court’s majority ignored: Omar Alvarez had in fact changed in significant ways. He had amassed a positive institutional record in prison. He was also gravely ill. His cancer was not diagnosed until it had metastasized and caused compression around his spinal cord. He was a paraplegic, confined to a wheelchair and unable to control his bladder and bowels. Speaking directly of Alvarez’s 66 2/3 to life sentence, Judge Wilson wrote that “The possibility of a transformation like Mr. Alverez’s is precisely why our system should rarely if ever sentence young people to life without some realistic opportunity to seek parole.”

Directly calling out the other judges who found no fault in the attorney’s failure to seek resentencing, Judge Wilson asked, “Were Mr. Alvarez your son, would you have instructed his lawyer not to ask the Appellate Division to exercise its interest of justice jurisdiction to give him the chance to prove he had earned parole?”

The court’s majority – the other five members – referred to the “minuscule” issues raised by the motion and without any apparent sense of shame wrote that “the brief filed by appellate counsel was somewhat terse, could have been better drafted, and is not a model to be emulated.” In so easily dispatching Alvarez’s appeal, the Court revealed its general attitude toward the pleas of thousands of people whose cases are either never reviewed or whose convictions are readily upheld without serious scrutiny and sense of humanity.

The court is not the answer to the criminal legal system’s many faults. However, it impacts lives in profound ways. It is Cuomo’s court, and he can and must fix it. In his words, “enough is enough.”