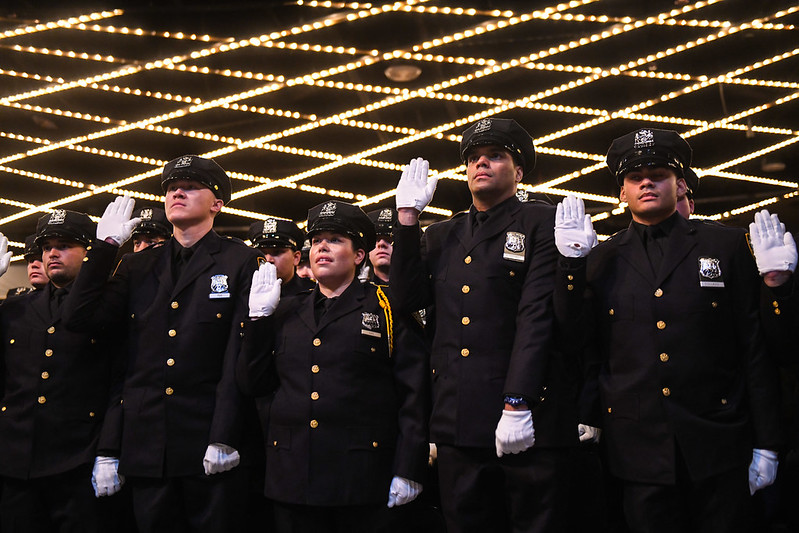 An officer slams a driver on the hood of a car during a traffic stop, then punches the driver’s sister twice in the face, and escapes punishment. Another officer draws his gun on an 11- and a 13-year-old playing in a city park, and sees the charges against him dismissed without trial. A lieutenant pushes a man from a crowded sidewalk into traffic, and has his guilty verdict vacated. Dozens of cops with repeated disciplinary citations, including one serial abuser of humiliating full-body searches, rise through the ranks of the NYPD unimpeded.

Right now, this is how oversight of the NYPD functions – or, more accurately, fails to function. In New York City, despite the existence of a so-called oversight body, the Civilian Complaint Review Board (CCRB), the discipline of police officers for even the worst misconduct comes down to the whims of one man: the Police Commissioner, who is legally empowered to toss out guilty verdicts, ignore investigative findings, and vacate punishments that in many cases were only imposed at all after years of legal wrangling.

Over the last 20 years, the NYPD reduced or eliminated punishment in a whopping 71% of the most serious cases of police misconduct. Recent years have seen little improvement. In 2018, the Police Commissioner dismissed officer punishments issued after a trial in 62% of cases. In 2019, the Police Commissioner reduced or eliminated officer punishments in 49% of non-trial cases, and in 38% of serious charges warranting trial. In the first half of 2020, the NYPD declined any punishment at all in 48% of serious cases that went to trial. Check out the monthly statistics put out by the CCRB and it’s the same story: in cases minor and major, the Commissioner steps in to lessen or vacate officer punishment.

The problem here isn’t just an oblique issue of justice, although it is unjust. When police officers know they are unlikely to be punished for their misconduct – indeed, will likely continue to receive promotions and accrue status – they behave accordingly. As a former CCRB investigator, I saw officers skip out on interviews for weeks. When they did participate, they “forgot” most details of an incident. Today, officers continue to lie to the CCRB without consequence. It is not an agency that is taken seriously.

If it sounds bleak, it is. But I have good news. Last month, the New York City Council passed a resolution formally asking the state government to enact legislation that would remove the Police Commissioner’s exclusive authority to determine police discipline — authority which, by any fair accounting, he has abused.

Now, it is the state’s turn to shoulder some of the responsibility for the largest police force within its borders. While I’ve argued that New York City can go it alone, the current City Council believes it needs the State to pass a new law that modifies the Police Commissioner’s discretion and gives real teeth to the city’s NYPD oversight mechanisms. And on that, I have more good news: there is a bill ready to be taken up, passed, and signed.

Bronx Senator Jamaal Bailey and Queens Assemblymember Catalina Cruz are sponsoring such legislation (S5252). The bill is narrow, and makes two changes to the law. First, it would remove the Police Commissioner’s authority to reject or modify disciplinary determinations made by the CCRB. Second, it would preserve officer due process while moving disciplinary trials to an independent body (they are currently heard in, you guessed it, the NYPD’s internal court system, another conflict of interest).

These two changes would have a profound effect on policing in New York City, and by focusing solely on accountability for officer misbehavior, are refined and targeted to what should be an uncontroversial reform. This is not defunding – and I say that as a Defunder. Cops who don’t break the rules would never even know this law was passed. This is as close to the lowest hanging fruit of reform as it gets, and yet, it would still provide a measure of accountability that could radically change NYPD culture.

All too often, when a police officer kills an unarmed person, we later learn that he or she had a history of misconduct and nobody stepped in. Daniel Pantaleo, the officer who killed Eric Garner, had seven civilian complaints, with two substantiations – in total, he lost two vacation days and kept actively patrolling the streets right up until the day he choked Garner to death. We can never know if better oversight would have prevented Garner’s killing, but if we are serious about stopping these needless deaths, just doing nothing cannot be an option.

Governor Cuomo wants police reform – indeed, he is demanding it. The vast majority of Assembly members and Senators, moderates and liberals alike, have called for serious fixes to a clearly broken system. In New York City, we want to do our part, and our elected officials could not have been clearer: we need Albany to act. Let us make these vital changes to the law, before we lose one more life to a rogue cop.

***
John Teufel is a lawyer, writer, and activist based in Brooklyn. On Twitter @JohnTeufelNYC.