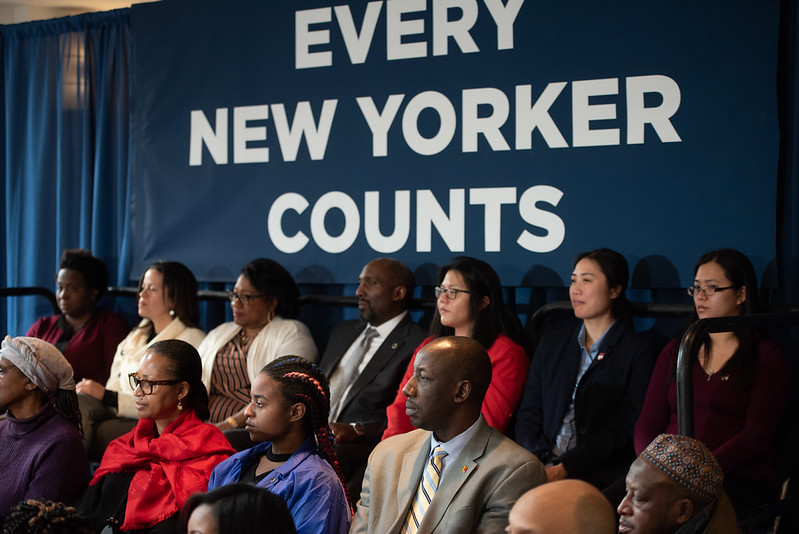 The national census headcount happens every 10 years and is the most democratic process we undertake, also making it the largest competition that states can participate in. The population estimates, which are derived from the count, are used to distribute the 435 seats in the House of Representatives amongst all 50 states. The data collected on who we are isn’t only used for apportionment, it’s the best data that federal, state, and local governments, businesses, and universities will have about who New Yorkers are—and affects all other data collected for the next 10 years. This count is vital to New York’s COVID- 19 recovery, decisions about where to build schools or expand businesses, and a wide range of other plans that we have for the future.

The decennial count is always a heavy lift for the Census Bureau, states, and communities. This time around, there was a lot of reason to fear that New York would not have a fair chance of earning its equitable share of representation in the House of Representatives or the billions of dollars in federal aid that gets allocated based on census data. From the Trump administration’s attempts to require an intimidating question about citizenship, to suppression of the count by ending the door-knocking and response time early, to the global pandemic that severely delayed the start of the Census Bureau’s in-person follow-up, 2020 was by far the most controversial census count in memory. It is a victory that New York didn’t see a further drop in representation in Congress.

Although New York was projected to lose up to two seats in the House of Representatives, we lost just one, and came incredibly close to not losing a single seat. We were only 89 people short of retaining our 27th seat in the House. The count shows that the total state population was 4.2% higher than in 2010—indicating that the state is growing—but other states have grown faster. When it comes to the census, everyone counts, and these results make it painfully clear. Advocates across the state worked tireless in the years leading up to the count to reinforce this message.

Community-based groups always play an important role as trusted voices promoting full participation in the census, particularly in communities that may be hesitant about filling out government forms. In preparation for this work a broad coalition of groups came together under the banner of New York Counts 2020, led by the New York Immigration Coalition and with participation from a broad range of racial, ethnic, immigrant, LGBTQ+, religious, health, education, labor, housing, social services, civic, and business groups working in partnership with Complete Count Committees and state and local government officials.

In the runup to the 2020 census, the Fiscal Policy Institute joined the New York Counts 2020 coalition, calling on the governor and state legislature to support community-based organizations to help the state achieve an accurate count. FPI provided an analysis showing how much was needed: $40 million statewide, with a breakdown of what was needed in each county.

Even before the covid pandemic, we knew that this would be a much more difficult climate to get people to respond to the ten-question survey. The unforeseeable delays brought on by the pandemic made everything about the census more complicated. Community groups began education campaigns years in advance of the census to overcome these obstacles. The fact that 20.2 million New Yorkers were counted is a testament to the tireless work that unpaid volunteers and paid Census Bureau workers put in across the state.

New York State could have been better prepared for the decennial count even before the lockdown orders that forced doorknockers and volunteers to stay home.

In the fiscal year 2021 (April 2020-March 2021) budget New York State invested $30 million to support all 62 counties, cities, and community-based organizations in their census outreach efforts. That’s less than the $40 million the Fiscal Policy Institute analysis suggested was needed, but, through significant investments from the New York City government and some investments in individual counties eventually put the total close to what FPI proposed.

A big shortcoming was the time it took for the funding to get to the groups doing the work. There is often a long road between the time state funding decisions are made and the time the money gets disbursed, but the census outreach funding was far beyond the norm.

Governor Cuomo convened a Complete Count Commission that began its planning for the state’s census outreach in January 2019, the same month its final report was due. This delay impacted every subsequent stage of the state’s census outreach. Ultimately, some of the state funding for cities, counties, and community-based organizations was distributed in July 2020, four months after the start of the count, at the bitter end of the count when many groups were wrapping up their efforts. Because of the last-minute scramble many we know that not all of the funding that was allocated was actually spent. Imagine how many more people could have been counted if there was a timely investment in the organizations across the state who helped count New Yorkers.

In the end, 89 people is so close that it’s impossible to say whether the state could have saved another House seat if, for example, community groups had been funded and supported earlier or more fully. We don’t want as many seats as we can get, but we do want our fair share.

Still, losing only one seat is relatively good news, and a tribute to the tremendous work of community-based groups both before and after they were funded to do outreach. Most models predicted New York would lose two House seats. The final census outcome shows how important it is for states to invest in census outreach at the grassroots level, and that it needs to happen sooner rather than later.