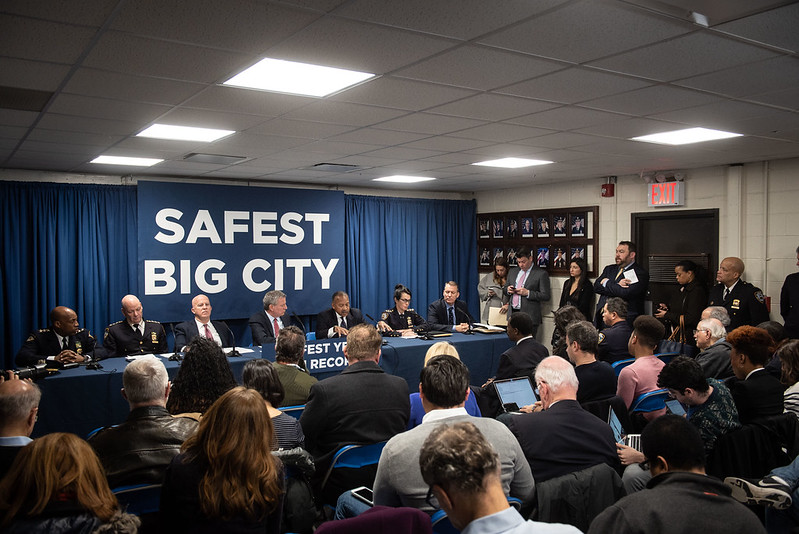 The mayor at a policing press conference (Mayor's Office)

People joke that New Yorkers think our city is the center of the universe, but judging by the recent media coverage, you’d think the rest of the country fell off the map. As we respond to the heartbreaking surge in shootings, many are quick to link the trend to civil rights protections like bail reform or the repeal of the controversial police secrecy statute 50-a. But the truth is that this isn’t a New York City problem, it’s a national crisis, with homicides up in nearly every city.

Of course, New Yorkers are right to worry more about crimes in our own communities, but as we grasp for explanations, we have to remember that more than local issues are to blame. New York’s homicide rate was up nearly 40% last year, but it was up 33% for all major cities.

Yet none of this has stopped NYPD leaders, police unions, and others from weaponizing the crime spike in a cynical effort to push back on recent historic civil rights protections. Every time a high-profile crime occurs, they blame “the do-nothing pols,” without ever really showing how politicians have supposedly undermined safety. And if New York’s leaders were somehow culpable for our city’s crime surge, just how did they manage to do the same nationwide? The argument makes no sense.

Instead, police boosters keep doubling down on this big lie: that we have to choose between safety and equity. That we have to allow them to act with impunity or somehow society will fall apart. But the truth is that we’ve seen this playbook before, far too many times, and we know where it leads.

If police use this moment to roll back civil rights, New Yorkers will suffer. One of the laws that the police unions hate most was the repeal of section 50-a. This long-standing statute was reinterpreted by the de Blasio administration to block public access to police disciplinary files. The unions fought the move to repeal 50-a tooth and nail, including going to court to block it, and they lost.

Now, as a result, the public has access to years of abuse allegations against officers, detailing the ways New Yorkers’ rights were violated and bodies brutalized. Is this making New York less safe? Not unless you’re an abusive cop.

Next, they complain about the years-long campaign to reform bail abuse in New York. Prior to last year’s reforms, New Yorkers were routinely held for months, even years, simply because they couldn’t afford to pay bail. Under our bail laws, poverty was a death sentence for New Yorkers like Kalief Browder and Layleen Polanco. But New York quickly rolled back some of the bail laws last year, and thousands of New Yorkers are still being held on bail, even now, in the middle of a pandemic.

It would be bad enough if it were only the NYPD and police unions spreading this fiction, but many leading candidates for mayor have joined them. In the aftermath of a tragic shooting in Times Square, which wounded a small child, Eric Adams and Andrew Yang railed against police reforms and promised the return of deadly and abusive plainclothes police units. Neither candidate could explain how such officers would have prevented this horrific attack, and both almost exclusively avoided the tragic history of what plainclothes police have done in the past.

Plainclothes units were disbanded after last summer’s protests against police violence, but it was only the most recent time. The same squad had been disbanded two decades prior (and later reassembled) after officers shot Amadou Diallo 41 times.

While it’s clear that plainclothes officers are more prone to complaints of violence and excessive force, it’s not clear how they help supposedly lower crime. In the past, officers spent most of their time on discredited tactics like stop and frisk, subjecting Black and Latino New Yorkers to constant harassment.

We’re all desperate to return to the pre-pandemic city we love, but telling the public policing fairy tales won’t get us there. The sad, somber truth is that as long as we face massive unemployment and insecurity, desolate streets, and closed-down classrooms, no police policy will help. We just can’t arrest our way out of a pandemic.