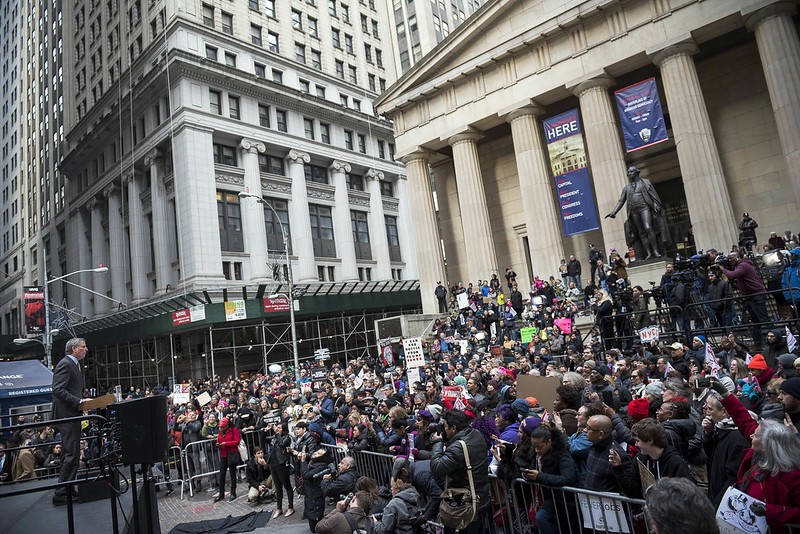 This past week, an obscure public body, the New York City Banking Commission, decided that the city can resume banking with Wells Fargo — meaning the scandal-scarred bank could hold billions of public dollars for at least the next two years.

The Commission, composed of the Mayor, Comptroller, and Commissioner of Finance, voted to redesignate Wells Fargo during an 11-minute remote meeting with no opportunity for the public to weigh in.

You’ve heard of three men in a room. Meet three men on a Zoom.

Stakes were high, transparency was low, and New Yorkers deserve better. That the Commission even considered placing city deposits in Wells Fargo again underscores how entangled New York City’s finances are with Wall Street — and the extent to which big banks call the shots in our city.

Prior to the meeting, members of the Public Bank NYC coalition and the New York City Council strongly urged the Banking Commission to reject Wells Fargo’s request to hold city deposits. Ignoring widespread opposition, the Commission voted 2-to-1 in favor of the notorious predatory lender and climate destroyer. A representative of Comptroller Stringer voted “no,” but his vote was overridden by two “yes” votes by representatives of Mayor de Blasio and Commissioner of Finance Sherif Soliman, a mayoral appointee.

The City cut ties with Wells Fargo in 2017 ostensibly in response to the bank receiving a long overdue downgrade of its Community Reinvestment Act rating. In fact, environmental and indigenous rights activists, racial and economic justice groups, and many others had raised multiple justifications for dumping the bank.

Wells Fargo’s misdeeds and scandals are too numerous to list, but here are some lowlights:

Wells Fargo’s shameful record raises a question we’re tired of asking: How bad does a bank have to be before it faces real consequences? We need a public option for the city’s financial holdings—a public bank for the public good.

Public banks are owned by and accountable to the people. Rather than being driven solely by profit, a public bank would be mission-driven and chartered to meet the needs of the city, particularly historically-redlined Black and brown neighborhoods.

A public bank would give the city a powerful new tool to help ensure a just recovery and strengthen our ability to withstand future crises. It would partner with community-based lenders to deliver responsible financing and emergency funding to small and worker-owned businesses hardest-hit by COVID-19.

Public banks around the world responded quickly and effectively to economic devastation caused by the COVID-19 pandemic, shoring up small businesses and other critical infrastructure. That’s because public banks specifically invest in sectors that provide direct economic, social and environmental benefits.

We can bring that success here, with a New York twist.

Through public banking, New York City can support permanently-affordable housing, small and worker-owned businesses, green infrastructure, and other equitable development in Black and brown neighborhoods—and divest from Wall Street banks that actively harm New Yorkers, our economy, and the planet.

The broad-based Public Bank NYC coalition has charted a path for the city to follow to establish the country’s first municipal public bank.

For starters, the City Council must advance “The People’s Bank Act,” a transformative legislative package that lays groundwork for the creation of a public bank. The Mayor should work with the Council to establish a public bank capitalization fund.

In Albany, legislative leaders must pass the “NY Public Banking Act” this session, paving the way for cities and counties across the state to pursue public bank charters.

Reopening the door to Wells Fargo suggests that city officials have not learned the lessons of the past year, or decades. In the face of New York’s severe affordable housing shortage, climate devastation, and extreme racial wealth inequality—all exacerbated by COVID-19—we need bold action.

A public bank would build wealth and power in communities hardest hit by the pandemic. It’s needed now more than ever.