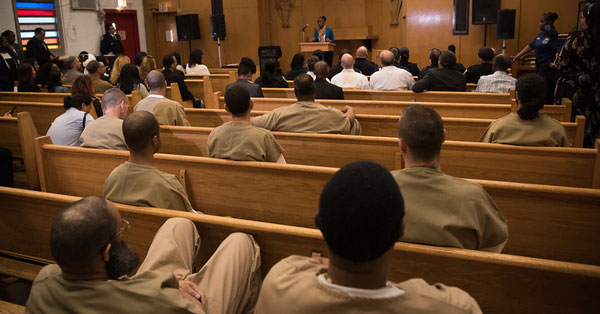 In New York, our rates of recidivism are unacceptably high. An estimated 45% of all parolees in New York City experience a re-arrest within two years.

Eliminating barriers to reintegration into society is a proven, fact-based way that we can reduce recidivism, and that starts by treating formerly incarcerated people as regular people.

In New York, we place a needless hurdle in the way of enabling a formerly incarcerated person from succeeding. Currently, when a person is released from prison, they are given a temporary ID card from the Department of Corrections. In essence, they carry around a card labeling them as a former convict.

This makes it much, much harder for someone returning home to proceed with the day-to-day things they need to succeed in re-building their life. Imagine trying to do something as routine as applying for an apartment and having the broker look at you with fear after seeing that you were incarcerated, or going to a job interview and having the employer immediately question whether you can be trusted. This is what New Yorkers who have paid their debt to society face right now, and it’s not fair.

Reintegrating into society after incarceration is a daunting task. Half the people who get out go straight into a homeless shelter. They need to find a place to live. They need to find a job. Giving them a card that labels them as a former convict only makes this even harder. Instead of providing a released person with the same kind of identification we all have, they are given something that simply makes it more difficult for them to succeed, which is the goal not just for the person returning to society, but for all of us. The stigma associated with these IDs is both unnecessary and extremely harmful.

Our system of incarceration has lost its focus -- we should be doing everything in our power to reduce incarceration and recidivism, and lowering these rates should be our measure of success.

We cannot continue to incarcerate Black and brown New Yorkers at such alarming and disproportionate rates, and we need to step back and refocus our efforts on both keeping people out of prison and giving them the tools to succeed and avoid recidivism once they are released. While reforming our policing is part of the equation, it’s on our lawmakers to take action now to reverse this damage.

The truth is this: there’s no public safety reason that anyone can articulate as to why these stigmatized Corrections-issued IDs are necessary in place of a regular, non-driver ID. Why are we complicating the process when what we really need is assistance for people focused on reintegration back into society, finding a job, and spending time with loved ones?

This issue may seem like a small one, but it will make a world of difference for someone who is trying to rejoin society and obtain a job. The number one thing we can do in our state to reduce recidivism is eliminate the barriers to reintegration.

Our legislation, S1149/A4905, will require the state to provide returnees with a non-driver identification card — which is available to any New Yorker — to each incarcerated individual upon their release from custody. These IDs will help formerly-incarcerated people obtain jobs and live normal lives after their release, which will in turn help to lower our rates of recidivism by supporting reintegration. The state already has the information necessary to issue every person released from prison with a non-driver ID, so implementing this should be easy.

Let’s cut through the bureaucracy and simplify the process.

There’s ample precedent that proves such a program could work. In New York City, there is an already established partnership with the Department of Motor Vehicles that assists parolees in obtaining a non-driver ID. It should be easy for us to use this already existing partnership to provide IDs that don’t carry a stigma to those who have been released from prison.

This issue shouldn’t be a controversial one. A state-issued ID could be the difference for someone struggling to readjust to life on the outside, and it could be the key to reducing recidivism in our state.

This is common sense legislation, and our colleagues in the New York State Legislature should join us and pass S1149/A4905 now.

***
Senator Brian Benjamin and Assemblymember David Weprin are members of the New York State Legislature, and are both candidates for New York City Comptroller. On Twitter @NYSenBenjamin & @DavidWeprin.