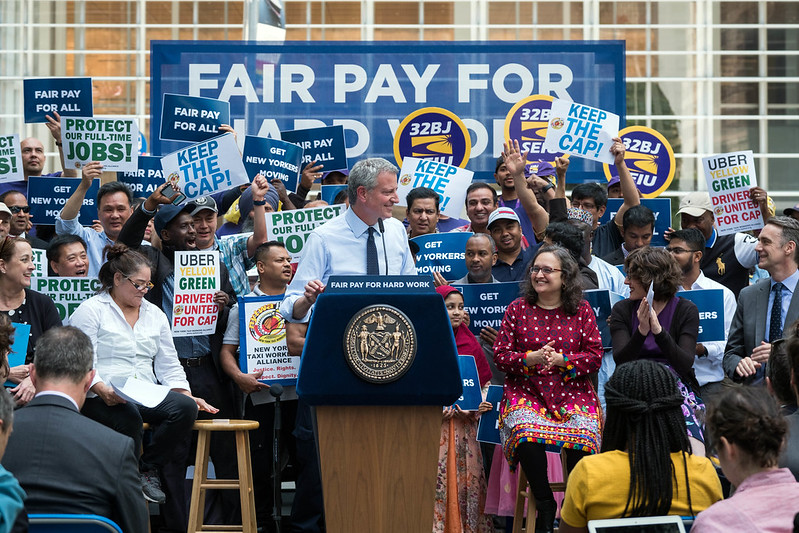 The mayor at an announcement (photo: Ed Reed/Mayoral Photography Office)

In February, my family and I discovered a “For Sale” sign on our house. For the last few months, we have been fighting for our home in the middle of a pandemic. For 90 days since then we’ve been living with the fear that our home would be sold and we’d have no place to go.

This has been a deeply traumatic experience for my family brought on by the taxi medallion crisis, predatory lenders, and the city’s failure to act. As the daughter of a taxi driver and a school bus matron, I’ve always known a life of living paycheck to paycheck, one of great instability. Working-class people live in crisis every day, and our city has a moral imperative to aid our communities with bold policy to ensure we can all live a dignified life.

The city’s taxi medallion system limited the number of medallions issued, which created an artificial market — and then that market was exploited to raise revenue. During the Bloomberg and de Blasio administrations, the city made more than $855 million from taxi medallions and collecting taxes on private medallion sales. Meanwhile, they opened the floodgates to Uber and Lyft, which eroded the medallions’ supposed monopoly rights to conduct street hails and led to the bursting of the medallion bubble. For years, taxi drivers in our city have struggled to maintain a living and some can never retire because of our city’s neglect to effectively address the medallion crisis.

In November 2019, my father filed for bankruptcy because he could no longer manage to pay the bloated taxi medallion loan, surcharges, insurance, gas, and repairs on what he was earning as a taxi driver, let alone also maintain other necessary bills. In the spring of 2020, his medallion was seized by Aspire Bank. On February 5 of this year, the United States Bankruptcy Court put the “For Sale” sign on our house — without any advanced notice — and verbally warned us that we had 90 days to reach a settlement with trustees or it will be sold. The trustees of the Bankruptcy Court, one of the only courts open and operating during the pandemic, told us that we need to come up with $250,000 within 90 days.

We knew that our lawyer was not working in the best interest of our family, and we were unsure who we could trust in a time of urgency and desperation. A legal assistance group, and a representative from the mayor's office called me, but after hearing the details of our bankruptcy case, they never called back. We knew time was moving quickly and eventually we paid to retain another lawyer that we found on our own.

During the settlement process, I learned that Bankruptcy Court allows Trustees to use fearmongering and threatening tactics to push lawyers and borrowers to move with urgency without any acknowledgement of the time it takes for families to weigh their options of losing their home or acquiring more debt.

In our case, the trustee became the owner of our home. When selling assets, the trustee gets about 6% or more from the settlement. In the middle of our settlement process, Aspire Bank, the lender who seized our taxi medallion, sold it to another lender instead of renegotiating the sale of the medallion back to us. Because the lender sold the medallion, we had to negotiate a settlement with the trustee who was willing to settle for $150,000.

Although this was not a settlement we could really afford, we knew it would be the last offer before they decided to sell our home. While we are relieved that the bankruptcy court process is over, we are in deep debt.

My family’s story demonstrates the dangers of our city’s neglect. This would not have happened if the mayor had fully adopted the New York Taxi Workers Alliance plan for debt relief, which would restructure medallion loans. Their proposal is supported by Comptroller Stringer, Attorney General James, and Senator Schumer, among others. But, the mayor’s plan is nowhere near what NYTWA is fighting for, it’s not debt forgiveness — it's a bailout for lenders. While the average medallion owner’s debt is $500,000, with industry business down 90%, the mayor’s plan is to have drivers take out $20,000 loans from the city as a payment to lenders.

The city is not just failing taxi drivers. New York state legislators are also negotiating the value of Uber and Lyft drivers as they are currently working on a bill that still allows drivers to be considered independent contractors, and leaked language in the draft bill indicated an attempt to limit actions like "any picketing, strikes, slow downs, or boycotts." Some legislators are still negotiating the value of human lives and dignity against profit margins.

Our fight is not over. We will not stop fighting until the immigrant and working-class communities who kept this city moving during a pandemic are prioritized in policy and aid over banks and corporations and their profits.

I want to thank every single person who has sent love, food, hope and donations to my family. We are so overwhelmed with gratitude for your outpouring during this difficult time. We are not the only family affected by the taxi medallion crisis; too many people have died by or lost a loved one to suicide, lost part or all of their income, their homes and their stability. Like so many others my dad will never be able to retire — out of 6,000 medallion owners, 1,200 are over the age of 62. This is why we chose to share our story and stand in continued solidarity with taxi drivers and their families across our city and beyond.

In June, we have the chance to elect a City Council and a Mayor who will prioritize people over profits and treat our essential workers as essential New Yorkers. Get out there and vote for the people who lead with courage.

***
Felicia Singh is a teacher and Democratic candidate running for New York City Council in District 32 in Queens. On Twitter @FSingh_NYC.