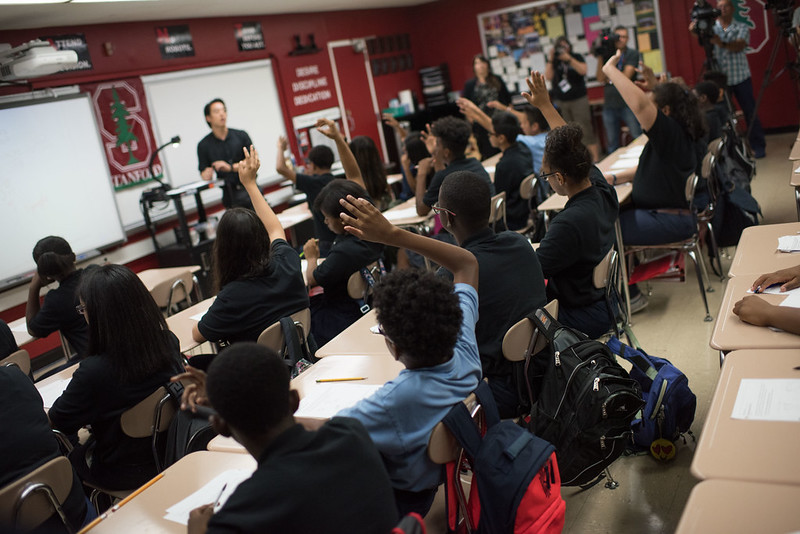 In 1980, Robert Jackson enrolled his daughter in Kindergarten at P.S./I.S. 187 on Cabrini Boulevard in Washington Heights. He soon noticed that her class sizes were huge, sometimes more than 30 or 35 children. There were no science or art rooms left because the school had been forced to convert them to classrooms. He decided to run for president of the school’s parents association, was elected, and soon thereafter became the head of the Community School Board in District 6.

As School Board President, Jackson decided to do something about the deplorable and overcrowded conditions in his district’s schools and citywide, and in 1993, he formed a coalition of parents, community members, and education advocates to sue the state for more education funding.

This lawsuit, filed in 1995, became known as the Campaign for Fiscal Equity (CFE) case, and in a landmark 2003 decision, New York’s highest court ruled that the city’s schools had severe and chronic deficiencies due to underfunding by the State of New York.

One of these core deficits was class size, which the justices concluded were far too large to provide children with their right to a sound basic education under the State Constitution.

In their ruling, the Justices noted that “evidence of the advantages of smaller class sizes supports the inference sufficiently to show a meaningful correlation between the large classes in City schools and …poor academic achievement and high dropout rates.” They also found that “tens of thousands of students are placed in overcrowded classrooms...The number of children in these straits is large enough to represent a systemic failure.”

Smaller classes in grades K-3 are a proven, cost-effective method of improving student success. They lead to better grades and test scores and reduce disciplinary problems and teacher attrition. Children assigned to small classes in the early grades are more likely to graduate high school, go on to college, receive a STEM degree, and own their own home. And studies show that smaller classes in the middle and upper grades are correlated with greater student engagement, persistence, and other attributes critical to better outcomes.

Students who reap the most benefit from smaller classes are those from low-income households, along with students of color, those with disabilities, and English language learners. Yet nearly two decades after the CFE ruling, class sizes in New York City public schools have actually increased rather than decreased – especially in the early grades.

Why no progress? In 2007, in response to the CFE ruling, the State Legislature overhauled New York’s school finance system. It enacted a new funding formula, Foundation Aid, promising a massive infusion of new state aid, and a new law, the Contracts for Excellence (C4E) Law, to ensure that the additional funds districts received were spent on programs proven to improve student learning. The law also specifically required the city to develop and implement a plan to phase-in smaller classes over five years.

Although New York City developed such a plan, it didn’t follow through. The result? Class sizes remain excessive, and, in the early grades, have actually increased by about 10%. Large disparities persist across the city, with especially huge classes in schools where the population has grown most quickly – often schools with high concentrations of immigrant and Latino students. Last year, more than a third of all students were in classes of 30 or more.

New York City teachers agree that reducing class size would be the best reform to improve student outcomes, and parents put smaller classes among their top priorities every year on Department of Education surveys. Most principals concur.

In 2018, nine public school parents, along with the Alliance for Quality Education and Class Size Matters, sued the city for not reducing class size according to the C4E law. Yet our lawsuit lost in court, primarily because the years cited in the law to implement a class size reduction plan had lapsed.

The federal government is providing the city’s public schools with $7 billion in additional aid to help them reopen safely and well. In addition, due to the efforts of advocates and a progressive State Legislature, including Robert Jackson, now a State Senator, our schools will receive the additional funding promised by the Legislature in 2007, with $530 million next year, rising to $1.3 billion annually over the next three years.

In recognition of the importance of smaller classes, Senator Jackson and Assemblymember Jo Anne Simon have introduced bills in their respective houses that would restart the clock on New York City’s obligation to lower class size. At the same time, the City Council, led by Council Member Daniel Dromm, Finance Committee chair and former middle school teacher, is calling for $250 million to be dedicated towards class size reduction next year.

The past year-and-a-half have been extremely difficult and disruptive for most students, who have spent months trying to learn remotely, staring into screens with only intermittent engagement with their teachers, fellow classmates, and the curriculum at hand. Isolated, bored, disconnected and at times even despondent, they will need the close, in-person support of their teachers more than ever before. It is even more evident now that human relationships are central to children’s emotional and intellectual development, and the strength of those relationships are immensely enhanced in a smaller class. It is past time that our city’s students are provided with the class sizes that have long been promised but never delivered by our elected leaders.