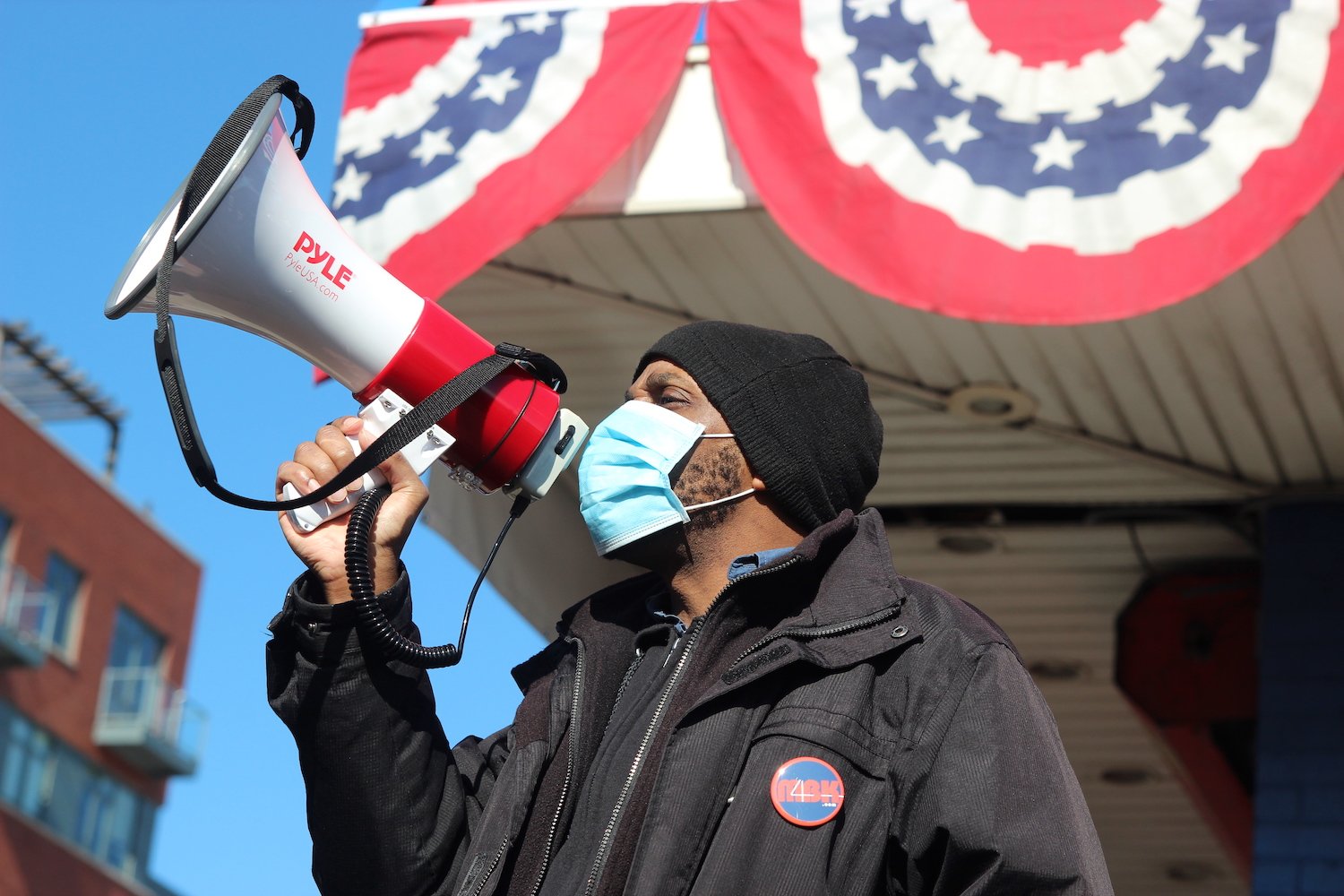 I live in Crown Heights, and to be specific, on Crown Street. For over 60 years, my building has been home to generations of working-class Black folks just like me. It used to be a rent-stabilized building, but in 2016 my landlord started converting vacant apartments into luxury condos. Some of them sold for over $1 million. Today, he continues to gut renovate empty units while refusing to make repairs to the apartments of existing tenants.

All throughout my neighborhood, I see traces of the Black and brown people who used to call this area home and the businesses that once employed them. On my block alone, what used to be Sea Crest Linen laundromat is now an empty lot targeted for luxury development, and where there was once a warehouse that employed locals, there is now a 12-story condo.

So why has Crown Heights changed so much over the last decade? Some of our elected officials like to cast all of the blame on young white transplants moving into our neighborhood, but gentrification doesn’t happen in a vacuum. It’s the result of decisions made by politicians who put their donors’ interests ahead of our community’s needs and sell us out to private developers. Many of our local elected representatives have spent years passing anti-Black, anti-brown, anti-poor, and anti-working-class housing policy. They’ve gutted tenant protections and neglected the agencies meant to protect us from rising rents and displacement in favor of campaign donations from real estate interests.

That’s not to say we haven’t fought back. My neighbors and I were there in 2017 when District 35’s current City Council member, Laurie Cumbo, approved the sale of our public land, the Bedford Union Armory, for redevelopment. We demanded, alongside Laborers Local 79—a union of construction and general building workers—that the Armory become a community land trust under a new public housing model built with union labor. And we were told that the project would transform the historic site into a recreation center.

But instead, Cumbo and former State Assembly Member Walter Mosley saw it as a money-making opportunity. They created the luxury rental market in Southern Crown Heights where one didn’t exist, and offered so-called affordable units, which were never meant to be accessible to tenants in the area. We were lied to, told that the market-rate units would “subsidize” the recreation center, but in reality, it didn’t need to be subsidized—Cumbo’s developer donors just wanted to make a profit. Compounding past and future harm to the community, construction today at the Bedford Union Armory site is unsafe, underpaid, and non-union.

My neighbors and I were there again in 2018 when Cumbo and her senior staff set their sights on the Franklin Avenue Corridor south of Eastern Parkway, from President to Montgomery Street. Cumbo had plans to rezone the area, bringing in luxury development that would further the cycle of displacement. Opposition from the community was clear, as was the unanimous “no” vote from the community board. But Cumbo and her deep-pocketed real estate allies didn't want to hear what her constituents actually wanted. So this time, we fought back even harder.

Alongside two of my neighbors, I filed a lawsuit against Cumbo, various city agencies, and the developers Cornell Realty Management and Carmel Partners. We represented ourselves in court, while the opposition hired more than 20 attorneys to try and stop the will of the people. In the end, the New York State Supreme Court annulled the 2018 Franklin Avenue rezoning. It was a crucial victory for the long-term Black residents who this development would have displaced.

And where are we now? We’re at a crossroads. So much is at stake in the City Council election happening this month -- with early and absentee voting and primary day, June 22 -- and that’s part of why I decided to run to represent District 35, so my neighbors have the choice to vote for someone who has always stood on the side of our community.

One block away from me, the proposed development at 960 Franklin Avenue is the latest threat to our neighborhood. I remember when it was the Spice Factory, which employed lots of Black and brown folks. Now developers want to rezone to build the largest residential development in Crown Heights history: two massive luxury towers that would loom over the Brooklyn Botanic Garden and the Jackie Robinson Playground—casting shadows that would harm our treasured green spaces and transform our neighborhood into a playground for the real estate industry that’s wholly unaffordable to long-term residents.

Once again, we’re suing the city and the luxury developers whose interests are prioritized over ours. We’ve secured a temporary restraining order to halt construction for now, but the fight isn’t over. It’s a signal of just how broken the system is when we have to sue our own elected local representatives in court to have our voices heard.

Housing injustice is the most important issue facing Central Brooklyn. We need and deserve safe, resilient, deeply and permanently affordable housing for all. To get us out of this crisis, we have to keep fighting alongside our neighbors, building tenant power, and strengthening protections for tenants and homeowners—which I’ve done both locally and statewide as an organizer with the Crown Heights Tenant Union. We also need allies in the City Council who will use their power to strengthen and expand social housing, and have a proven history of standing up to the real estate industry and predatory landlords. Together we can ensure a just future for our city dictated by tenants, working-class homeowners, and workers, not luxury developers.