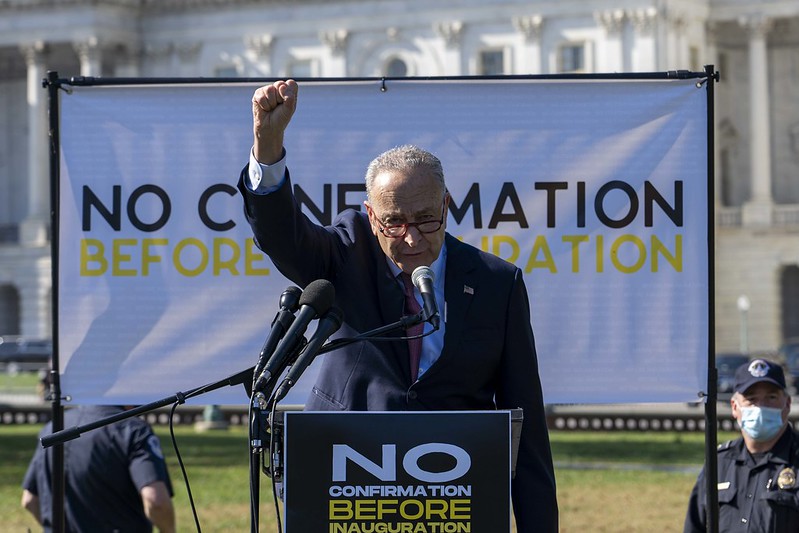 It’s 2024. Democrats have lost the House and Senate thanks to gerrymandering and voter suppression. Although Joe Biden won reelection, Republican Secretaries of State are throwing out millions of ballots in order to change the results. White nationalists storm the capital, and Republican House and Senate leadership welcome them in with open arms. The far right Supreme Court upholds their actions. A Q-Anon believing, white nationalist, climate denier is installed as president. Once again, blue states like New York are denied essential funding from the federal government as vengeance for their voting preferences. City and state level laws that protect immigrants, uphold abortion rights, tackle gun violence, and protect the environment face renewed attacks from an extreme right wing government in D.C. And meanwhile, global carbon emissions continue to rise, locking in an uninhabitable future.

This is the future we face if Majority Leader Chuck Schumer doesn’t end the Senate filibuster to pass S1, the For the People Act, within the next few months.

Donald Trump’s presidency and attempts to steal the 2020 election made clear that our democracy is weak. That’s why Senate Democrats’ very first bill, S1, is a comprehensive democracy reform bill to protect voters, end gerrymandering, and secure democracy.

Meanwhile, state Republicans in swing states of Florida, Georgia, Arizona, Texas, Pennsylvania, and more have passed laws designed to disenfranchise Black, youth, immigrant, and poor voters while making it easier for Republican elected officials to throw out votes after they are cast.

But Schumer is nowhere to be found. With Republicans successfully filibustering legislation to investigate an armed attack on the capitol, you’d be forgiven if you assumed Mitch McConnell was still majority leader. And the clock is ticking on S1: if Democrats don’t pass this crucial democracy reform by the end of the summer, it will be too late to protect voters’ freedom to cast their ballots in 2022. Then, Democrats will likely lose the House and Senate in the midterms, and with that, they will lose their last chance to protect our democracy from the authoritarianism of Trump Republicans.

And the midterm election isn’t our only deadline. According to scientists we have less than nine years left to cut global greenhouse gas emissions and keep global warming to 1.5 degrees. If we continue our current course we will see 3 or even 4 degrees celsius of warming in our lifetimes, enough to displace hundreds of millions if not billions of people, to turn rainforests into deserts, to cause famines, floods and fires leading to horrific mass death on a scale we can’t even imagine. If Democrats don’t act now to protect and secure democracy while also passing aggressive climate legislation, America will miss a precious opportunity to prevent disasters with unimaginable human cost.

Here in New York, millions of people - millions of Senator Schumer’s constituents - could soon see food and water shortages as well as increasingly frequent superstorms and floods. Already, extreme heat kills hundreds of New Yorkers each year, and hits the elderly, the disabled, and Black New Yorkers first and worst.

Senator Schumer has said many times that tackling climate change is a top priority (along with protecting democracy). He has even introduced legislation to electrify transportation and is supporting the THRIVE Agenda, a Green New Deal-inspired legislative package.

But the thing is, none of it matters if he doesn’t end the filibuster. And none of it will matter if Democrats lose the Senate and House in 2022 and the presidency in 2024 to climate denying, white supremacists who are content to let the world burn as long as their oil industry donors make a profit.

Senate Democrats have a brief window to meaningfully protect the American people from an untenable, terrifying future. They must seize it. Senator Schumer is the majority leader. He needs to act like it.

End the filibuster now. Before it’s too late.

***
Liat Olenick is an activist and teacher. On Twitter @LiatRO.