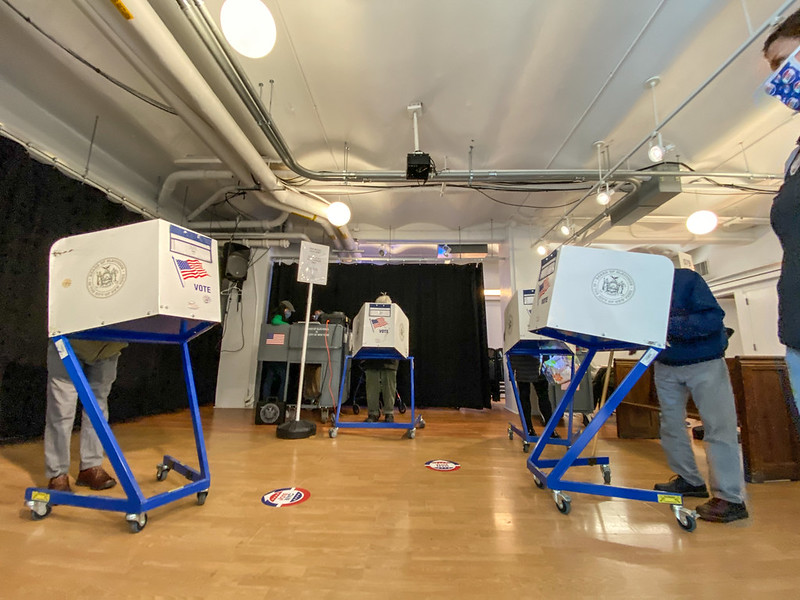 New Yorkers are choosing the next Manhattan District Attorney, who will profoundly shape prosecutions of gender-based violent crimes like sexual assault, domestic violence, trafficking, stalking, and hate crimes targeting women of color. It is essential that the next Manhattan DA combat the scourge of mass incarceration of non-violent offenders, and at the same time combat the under-prosecution of violent and predatory gender-based crimes. In the U.S., 49 out of 50 rape cases do not result in jail time for the perpetrator. We need the next Manhattan DA to lead in a better direction.

Yet some of the candidates have taken positions that would leave victims of gender-based violence even less protected than they are now. Here are just a few examples for Manhattan Democratic voters to consider.

Domestic violence
One survey asked if candidates would dismiss charges any time there are cross-complaints (two people accuse each other of violence) and the parties say they do not want to go forward with a criminal case. But false counter-allegations are a classic abuser tactic to terrify victims into dropping charges. Good prosecutors scrutinize cross complaints carefully, proceed with caution when a victim proposes to drop charges, and assess victim intimidation and lethality risk.

A blanket promise to dismiss cross complaints would nullify the victim’s access to criminal justice protection whenever a batterer strategically files a retaliatory charge. Candidates who promised to dismiss charges when there are cross-complaints included Tahanie Aboushi, Alvin Bragg, Diana Florence, Eliza Orlins, and Dan Quart. The candidates who answered “No” to this question were Tali Farhadian Weinstein and Lucy Lang. The eighth Democratic candidate, Liz Crotty, did not participate in the survey.

Sentencing
Multiple candidates in the race agreed that they would “never seek more than the minimum sentence.” Even for progressives like me who want to see incarceration reduced for many offenses, this pledge is extremely problematic when applied to violent crimes. If a serial child molester charged with multiple counts of sexual abuse in the first degree has no prior conviction (which many serial abusers—think Larry Nasser—do not), the minimum sentence is probation. Yet probation would be wildly irresponsible in such a case.

For countless cases of rape, domestic abuse, and other forms of violence, the minimum sentence would likewise be totally inappropriate. Survivors need prosecutors to tailor sentencing requests to the merits of each case, not adopt a one-size-fits-all policy. Candidates who agreed they would “never seek more than the minimum sentence” included Tahanie Aboushi, Alvin Bragg, Diana Florence, Lucy Lang, Eliza Orlins, and Dan Quart. The candidate who answered “No” to this question was Tali Farhadian Weinstein. Crotty again did not participate.

Resources
Some candidates pledged to cut the resources of the Manhattan DA office by 50%. Yet prosecutions of gender-based violence are labor intensive and are already under-resourced. We need the next DA to redistribute precious resources so that prosecutions of gender-based violence receive the investigative work, the expert witnesses, the forensic testing, the technology support, the trauma-informed approaches, and the prosecutor time and attention they need.

Candidates who agreed to cut the office’s resources by 50% included Tahanie Aboushi and Eliza Orlins. Candidates who answered “No” to this question were Alvin Bragg, Tali Farhadian Weinstein, Diana Florence, Lucy Lang, and Dan Quart. Crotty did not participate.

Arrest policy
Candidates were asked if they support a “mandatory arrest” policy for felony domestic violence. These are cases in which the abuser has caused serious physical injury, used a weapon, or violated a stay-away order of protection – truly dangerous situations. The policy instructs police officers to arrest assailants, not try then and there to “reconcile” the parties. It was enacted to stop officers from telling batterers to ‘take a walk around the block’ to cool off, leaving victims in danger. Candidates who opposed the arrest policy were Tahanie Aboushi, Alvin Bragg, Eliza Orlins, and Dan Quart. Candidates who supported the arrest policy were Liz Crotty, Tali Farhadian Weinstein, and Diana Florence.

The next Manhattan DA needs a bold, smart plan for combating gender-based violence. A report by Reform the Sex Crimes Unit evaluates and links to the candidates’ platforms; voters can assess the thoughtfulness and detail of each candidate’s approach. New Yorkers need the next Manhattan DA to show the world that we can reduce incarceration for non-violent crimes and combat the abuses of the criminal justice system, while at the same time protecting survivors of domestic violence and increasing the prosecution rates for rape. Let’s keep survivors of gender-based violence at the center as we build the New York City we want.

***
Jane Manning is an attorney and advocate for survivors of sexual assault.