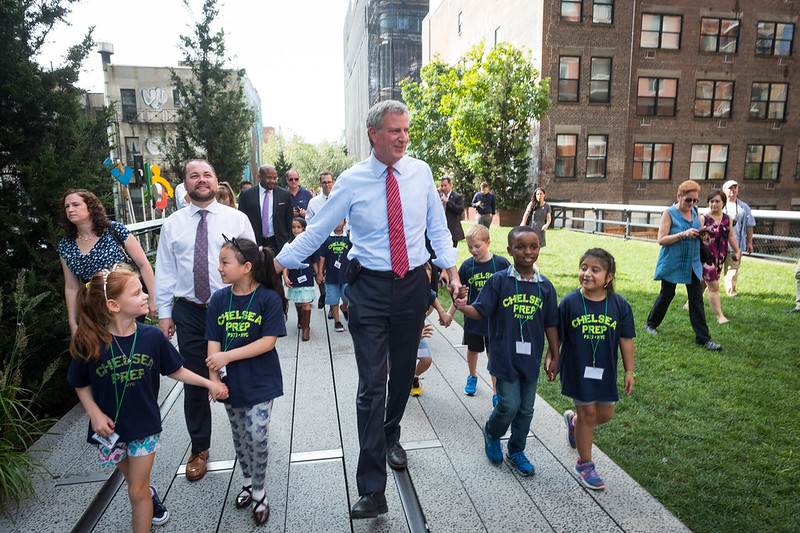 I would have voted for Bill de Blasio a third time if I could. Strip away the car trips to the Park Slope Y and the misguided presidential run, and evaluate the objective facts about New York City before and after his eight years in office and his two terms were a success. De Blasio’s administration shows the value of liberal incrementalism, or as President Obama put it: better is good.

De Blasio ran on the idea that New York was a tale of two cities, with inequality at the root of its ills. To rectify that inequality, the two major promises of de Blasio’s 2013 campaign were his commitment to ending the Bloomberg administration’s stop-and-frisk policing program and providing universal pre-kindergarten to New York families. He delivered on those promises.

The Bloomberg administration’s racist, harmful, and unconstitutional policy of unfettered stop-and-frisk was ended almost immediately. As a civil rights attorney, I will be the first to tell you that the NYPD’s abuses and unnecessary contact with the police did not end with Mayor de Blasio’s election, nor with the end of the stop-and-frisk program, but the numbers do not lie: policing got better in New York City under Bill de Blasio on almost every score. Use of force complaints against the NYPD fell dramatically during his time in office. Similarly, the daily jail population in New York City fell, misdemeanor arrests fell, as did marijuana arrests. Those are real improvements that reduced contact between New Yorkers and the police, even as racial disparities in that contact and violence persisted.

Crime also continued its precipitous decline in New York City under de Blasio, even if you would not know it watching TV news or reading daily tabloids. In 2018, New York City set a record for the fewest homicides in its measured history. And that was not merely a reflection of national trends. During Mayor Bloomberg’s last term, New York City contributed 3.4% of the nation’s murders. Under de Blasio, that number was 2.25%. New York has not been immune to a spike in shootings and murders over the past year-plus, but did not increase faster than the national average, and homicides appear to be moving back towards their 2019 numbers in New York City. In de Blasio’s New York, while people are not free from police and interpersonal violence, they are safer from both than they were under Bloomberg.

Universal pre-K was also successfully implemented. The program is a massive progressive success that has gone relatively unremarked. It is a life-changing result for less well-off New Yorkers and a massive transfer to the least well-off, increasing women’s participation in the labor force and the likelihood children will attend college. The program is now universal 3-K, extending to three-year-olds, adding essentially two years to the public school system, and it will be the largest of its kind in the country. It is a testament to both the success of the program and to its benefit for people underrepresented in the media that such a success has gone so unnoticed.

Even some of his failures are relative successes compared to national trends. Housing costs in New York City have gone up less quickly than the national average under de Blasio, a first for New York City in decades. Vision Zero brought New York’s auto and pedestrian fatalities down even as traffic fatalities increased in much of the country. New York City students have gained on students throughout the country in reading during de Blasio’s administration even as they stagnated in math.

This is not to absolve de Blasio of his failures. The population living in New York City shelters grew substantially during the mayor’s tenure as housing costs continued to increase and affordable housing remained far too scarce. His response to Eric Garner’s death was completely unacceptable and his defense of the NYPD during last summer’s protests reflected the extent to which de Blasio largely stopped his police reform efforts after 2015. While expanded bike lanes and Citi Bike have been successes, he has not shown enough verve on protecting bike riders and improving bus service. He promised to end solitary confinement a year ago, and has dragged his feet.

But better is good, and we must ask, “compared to what?” His failures often reflected the structural factors that constrain all big city mayors. Ask activists what they think of the last few mayors of Chicago or Los Angeles or New York City itself, and you will hear near universal condemnation of their performance, particularly on policing. We cannot, on the one hand, note the power police unions have amassed, which research has shown leads to increased police violence, while at the same time ignore that power in evaluating our leaders. The right wing media and police union ecosystem in place in the city was able to bully New York legislators into rolling back bail reform before it had really started. That same ecosystem successfully pushed a narrative that de Blasio was failing on crime and policing even as crime plummeted in 2014 and 2015.

Similarly, the political ecosystems of all American cities favor well-off white voters. According to political scientists Jesse Rhodes, Brian Schaffner, and Raymond La Raja, the views of white voters are structurally overrepresented in local politics throughout the country, even in cities like New York that are majority non-white. De Blasio faced this constraint. He rarely maintained a positive approval rating among white voters in New York City. Today, even with his polling numbers highly negative, de Blasio maintains strong net approval among Black voters, a number that would likely surprise the well-off white Democrats who treat his two-terms as a failure. De Blasio’s refusal to center their political preferences, as Bloomberg and Giuliani had while trampling on the rights of Black and brown New Yorkers, has consistently led to high disapproval.

In 2017, when de Blasio ran for re-election, his approval was low all year, until he ran against a real-life opponent. And when push came to shove in 2017, de Blasio cruised to re-election, and his approval jumped significantly. That is a good lesson for all of us.

Bill de Blasio did not improve policing in New York as much as I had hoped when I voted for him in 2013, and I wish we had built even more housing over the last eight years so that prices would actually come down for once. But New York City has improved over his eight years. It is hard not to look around at mayors of New York and other big American cities — past and present — and conclude that, like the old saying about democracy itself, Bill de Blasio has been the worst, except for all the others.

***
Joel Wertheimer is a civil rights attorney and political consultant living in Brooklyn. On Twitter @Wertwhile.