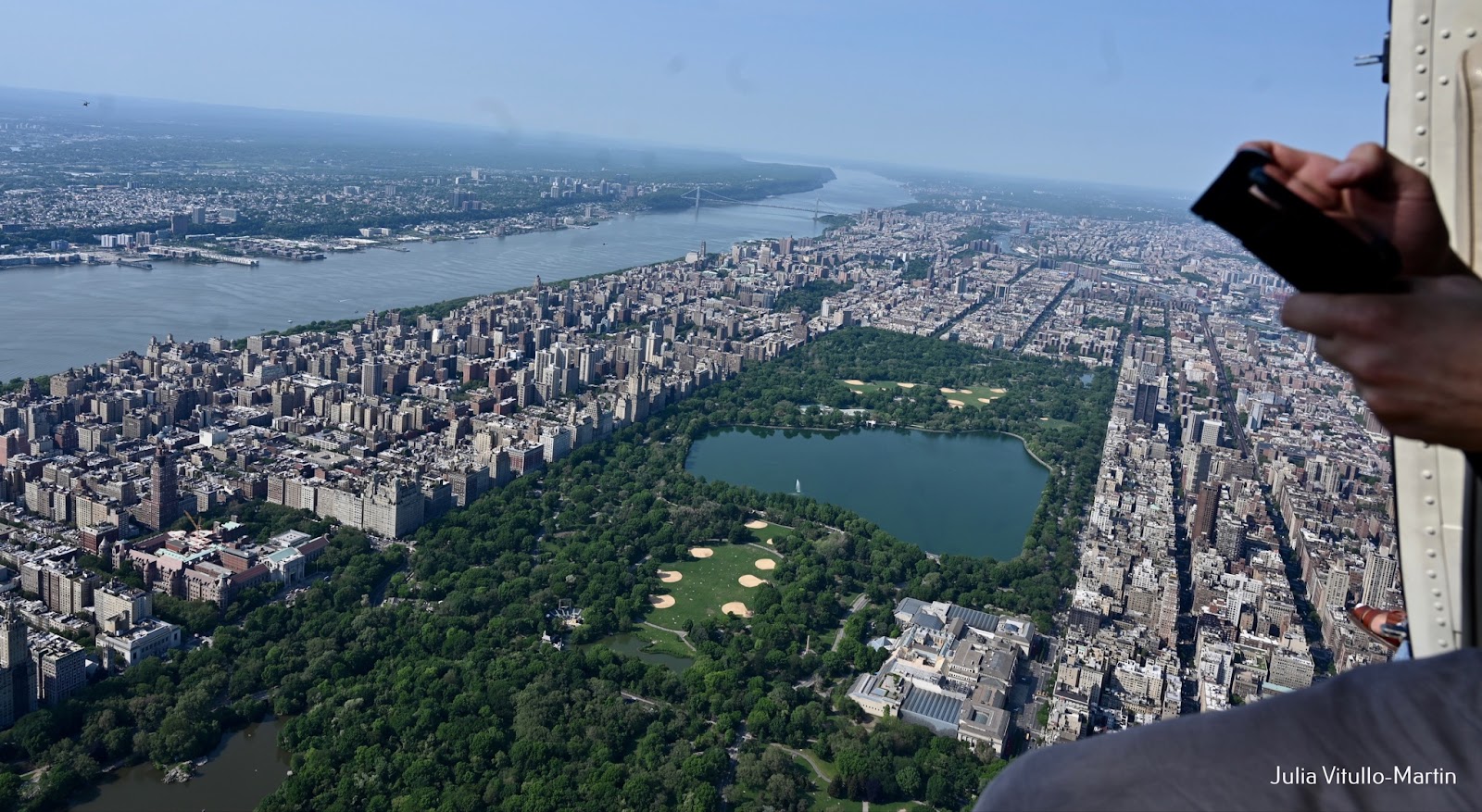 Thanksgiving! “One of NYC’s most beloved days of the year,” announces notorious doors-off helicopter company, FLYNYON, advertising its $489 seats over Macy’s Thanksgiving Day Parade. Manhattan Borough President Gale Brewer immediately responded by contacting the Federal Aviation Administration (FAA) and the NYPD “for answers. Both say it’s handled. Yet the website continues to advertise these tix.”

New York has only one path out of the helicopter mess we’re in and that’s via our next mayor, Eric Adams. He has declared war on lawlessness of all kinds—and we need him to launch a war on the lawless skies over New York.

The problem is that much of the worst behavior originates out of town. FLYNYON, which chartered the helicopter that crashed into the East River in 2018, killing five young sightseers, originates in Kearny, NJ. Other tour companies fly from several other New Jersey cities, Long Island, Westchester, Connecticut, and points farther away. New York cannot directly regulate flights coming  elsewhere since the FAA oversees the American National Airspace System, preempting local rules.

While Mayor de Blasio has said he opposes “non-essential” helicopter flights, he has taken no action. Can Adams be effective where de Blasio has failed? Adams will have two important advantages. First, he’s one of the most attractive new Democrats nationally, and will be able to get an audience in Washington. Second, he will have a powerful bi-state anti-helicopter coalition behind him of 35 elected officials plus private groups, already formed by Brewer.

She summarized the problem neatly in a letter to federal Transportation Secretary Pete Buttigieg and Environmental Protection Administrator Michael Regan: “Helicopters are hovering over our homes and public spaces, flying in between tall buildings and tormenting our residents with incessant noise. These aircrafts operate over our cities, towns, and boroughs night and day, often without regard for public safety or quality of life.”

Under its freedom-to-fly principle the FAA promotes the aviation industry, in order to “keep air travel moving freely and safely.” To the FAA the skies are a highway, skyway is the FAA term, that should be open to all, just as highways are open to all. But just as Americans are now re-thinking highway and road policies, we should be re-thinking skyway policies. Congressional Representatives Jerrold Nadler, Carolyn Maloney, and Nydia Velazquez have introduced the Improving Helicopter Safety Act to ban non-essential flights.

Lawless Skies
“New York is just one giant landing field,” contended an anonymous Twitter account, encapsulating New York’s current situation after a pilot landed his helicopter in a vacant lot in Brooklyn, picked up two passengers, and flew off to Lakewood, New Jersey, pursued by an NYPD helicopter. On landing, the pilot had a “cordial” conversation with the NYPD officers, said Kevin McKenzie, the on-site manager at Lakewood Municipal Airport. No arrest. No legal ramifications. The NYPD referred the Daily Mail to the FAA, which is reportedly investigating the incident.

As if this wasn’t enough, @BanTheHellies, a ferocious anti-tour-heli account, tracked pilot Ilan Nahoom touring the harbor after the Brooklyn pick-up, circling the Statue of Liberty at 100 feet, then climbing rapidly to 600 feet, barely clearing the Verrazano Bridge. All illegal, but not a peep out of the NYPD.

Meanwhile, even as New Yorkers made 17,733 calls to the city’s own 311 portal about helicopter noise through the end of September of this year—triple last year’s—311 has since given up on accepting more, because “much of the airspace over New York City is uncontrolled.” Tour helicopters fly pretty much at will under the FAA’s Visual Flight Rules.

Corporate and commuter helicopters heed directions from the airport towers. A major reason that New York City is tortured by ever louder, lower-flying, aggressive helicopters is that the towers direct pilots to fly low to avoid jets, which also themselves seem to be flying low these days, often at 3,000 feet and under, according to FlightRadar.

Commuter Flights
Ponder the map below of the FAA flight routes for the metropolitan area: The primary southern route from JFK across New York to Newark—Brooklyn—is labeled the Park Route because it crosses Prospect Park as well as the Brooklyn Botanic Garden at its northeastern corner. And while the directions on the map clearly urge pilots to “fly neighborly” and to request heights of 2,000 feet, nearly all helicopters fly well below 1,500 feet, often at 900-1,100 feet. At this height, the heavy Sikorskis and Bells used for corporate commutation are deafeningly loud, “ruining our places of refuge,” tweeted Adrian Benepe, president and CEO of the Brooklyn Botanic Garden. 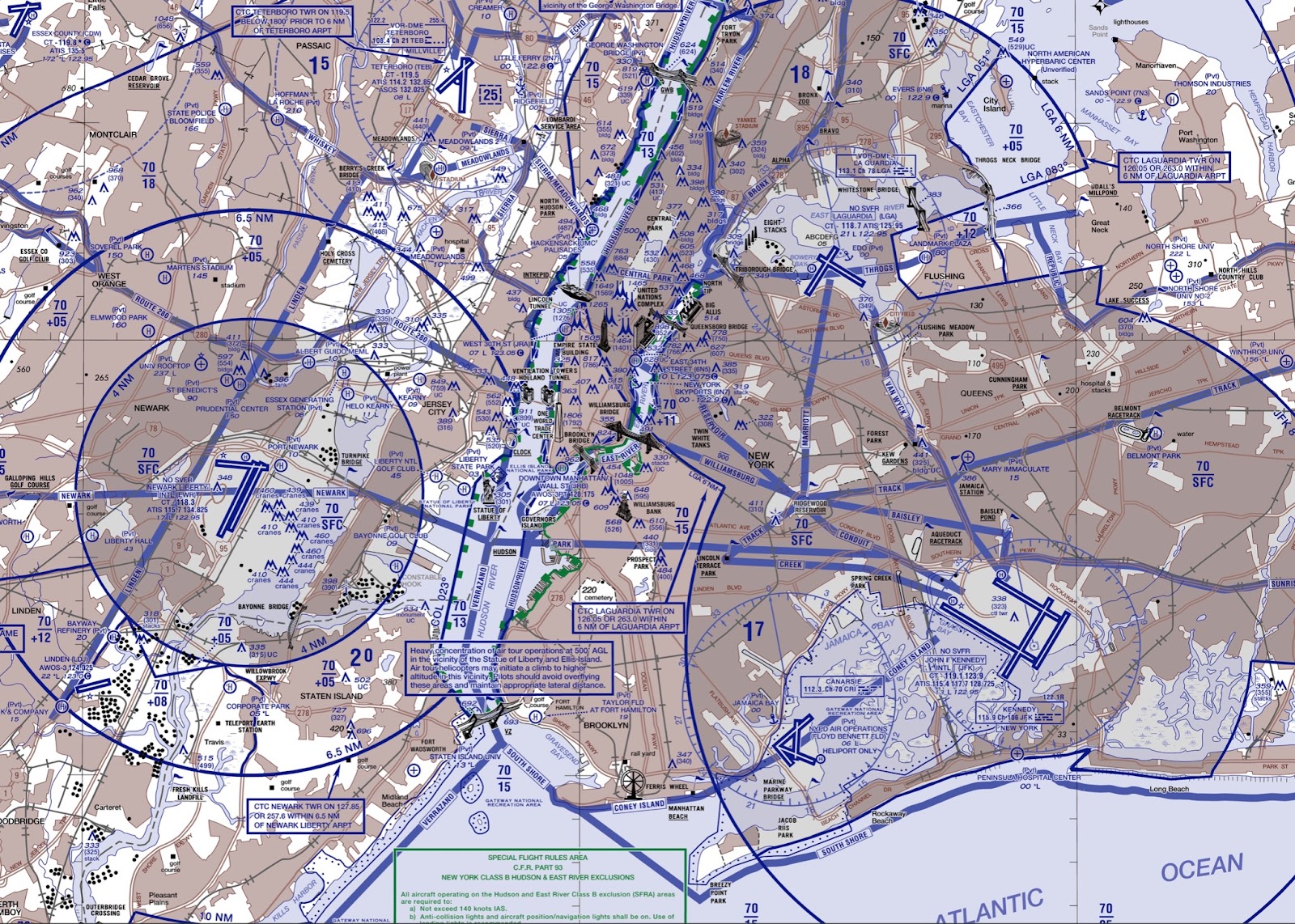 The northern route from the airports or the Hamptons (or when flying from New Jersey’s Teterboro or Caldwell) directs helicopters to New York’s other sacred park, Central. I keep FlightRadar open on my computer and have seldom seen a corporate or commuter flight above 1,200 feet. I know to look because the commuter flights roar low and loud through the skies above my building.

Rob Wiesenthal, CEO of Blade Urban Air Mobility, which schedules flights to the airports, the Hamptons, and many other destinations, says of flying into New York’s Class Bravo airspace, “the airport will advise the pilot where to enter the airspace as well as the route and altitude they are to fly. Often they will prescribe you to fly the tracks route, which crosses parts of Brooklyn.” The tracks are the parks.

This is an important aspect of what makes the commuter flights so objectionable: as currently routed, commuter flights inevitably disturb the peace of untold numbers of New Yorkers. As Brooklyn Botanic Garden CEO Adrian Benepe says, “Noise is 80% of the problem.”

Wiesenthal argues that it should be possible to confer with the FAA and airport towers to ease the situation. “We need to help our operators obtain permission to use routes that fly over fewer residences and at altitudes that reduce the level of sound that can be heard on the ground. We’re hopeful that Mayor Adams and his team can help us collaborate with key regulators such as the FAA and the local air traffic control to minimize the sound impact of aircraft in Brooklyn.”

And not just Brooklyn, I would add, but all of New York. Can Mayor Adams intervene? He’s not the kind of leader to accept an ongoing, permanent assault on his city.

It’s worth remembering that despite the territoriality of federal agencies and the egregiousness of federal judicial decisions declaring New York City powerless, anti-helicopter activism has had important victories over the last few years. Led by all-volunteer Stop the Chop, advocates in 2021 convinced New York’s tourist office, NYC & Company, to stop promoting helicopter flights. In 2016 activists helped negotiate a 50% reduction in tourist flights from the Downtown Manhattan Heliport, from 60,000 to 30,000, and eliminated all tourist flights on Sundays. The Downtown Manhattan Heliport has been a good citizen ever since. Activists in the Hamptons in 2012 forced a re-routing of helicopters to a water route along the North Shore.

But fundamental change will require federal action because, as District Judge Sonia Sotomayor wrote overturning local helicopter regulations in National Helicopter Corp. v City of New York in 1997, Congress expressly preempted any state laws which relate to the "price, route, or service of an air carrier." But New York has a large, strong congressional delegation that has come to its aid in the past. All New York needs, argues Manhattan Institute senior fellow Nicole Gelinas, “is a congressional amendment to restrict the airspace in certain areas to emergency helicopters. Daniel Patrick Moynihan would have gotten it done; in the Senate, he once amended the Clean Air Act to outlaw tolls on the Brooklyn Bridge. If the city’s politicians can’t convince New York senator Chuck Schumer, the Democratic majority leader, to restrict the airspace above Central Park and other theoretically quiet urban oases, it’s because they’re unwilling, not unable.”

If ever New York had a mayor capable of negotiating from a position of strength on its behalf it’s incoming Mayor Adams. He’s clearly up to the task. New Yorkers just have to convince him to act on behalf of our parks, waterfronts, and landmarks.