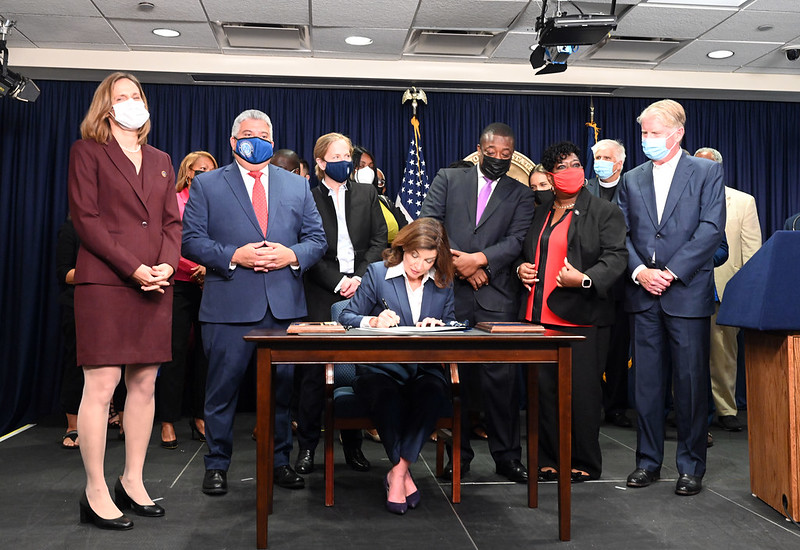 The state of New York took a moral step recently when Governor Hochul signed into law the Less Is More Act, which aims to soften the draconian parole laws that have disproportionately harmed people of color. Nearly 200 New Yorkers re-joined their families as soon as the bill became law, freeing them from Rikers Island amid escalating pandemic deaths in New York jails.

We can’t declare victory just yet. “Less Is More” doesn’t go fully into effect until March. For many people, a four-month wait is a matter of life or death. It needs to be put into effect immediately, and Governor Hochul should take the necessary steps to do so.

New York still has the worst parole system in the country with its use of incarceration for non-criminal technical parole violations -- like missing an appointment or even being early for a job, yes early. The state spent more than $680 million in 2019 to reincarcerate people on such violations.

This not only harms individual lives and families without improving public safety but also increases the state prison population. New York imprisons more people for non-criminal technical violations of parole than any state in the U.S. There are about 35,000 people in New York State under active parole supervision. Of those, more than 800 are incarcerated for technical violations.

Of course, the racial disparities are stark. Black people are incarcerated for technical violations at five times the rate of white people in New York state. In the city, that rate grows to 12 times. Latino people are nearly 30% more likely to be incarcerated for a technical parole violation than whites. Technical violations rob weeks, months, and even years from people’s lives, keeping them stuck in the prison system. Tragically, these violations also affect parolees’ loved ones and communities.

Opponents will tell you that “Less Is More” is bad public policy that only gained popularity because of so-called one-party rule by Albany Democrats, which is also not rooted in fact. Many of the provisions in “Less Is More” come from other states that have already implemented similar reforms, reducing community supervision populations and curbing violations, while also increasing public safety. The reforms mimic successful ones in more conservative states including Arkansas, Arizona, Georgia, Idaho, Kentucky, Louisiana, Mississippi, South Carolina, and Utah. Additionally, “Less Is More” aligns with reform principles outlined by current and former community corrections officials from across the country.

The Less Is More Act is supported by over 300 community, advocacy, and faith groups across the state, eight District Attorneys representing more than half of the state’s population, and law enforcement leaders from across New York, including the Albany and Erie County sheriffs. It has widespread support from victims’ rights groups like the New York State Coalition Against Domestic Violence and the New York State Coalition Against Sexual Assault.

Sending people to jail for non-criminal activity does not increase our public safety. With “Less Is More,” New York will be at the forefront of shifting parole from being overly punitive to being supportive. It is a matter of life and death for the communities of New York, and it makes sense for everyone.

Not only must we speed up the timeline to prevent needless incarceration as COVID-19 continues to spread in our jails and prisons given the Delta wave and the threat of the Omicron variant, but we must also protect the law from baseless attacks with questionable motives.

We need Governor Hochul to implement Less Is More today. Every day implementation is delayed is a day where peoples’ lives, health, and wellbeing hang in the balance.

***
Ashish Prashar is the Global CMO at R/GA and a justice reform activist. He sits on the boards of Exodus Transitional Community, Getting Out and Staying Out, Just Leadership, Leap Confronting Conflict, and the Responsible Business Initiative for Justice. On Twitter @Ash_Prashar.