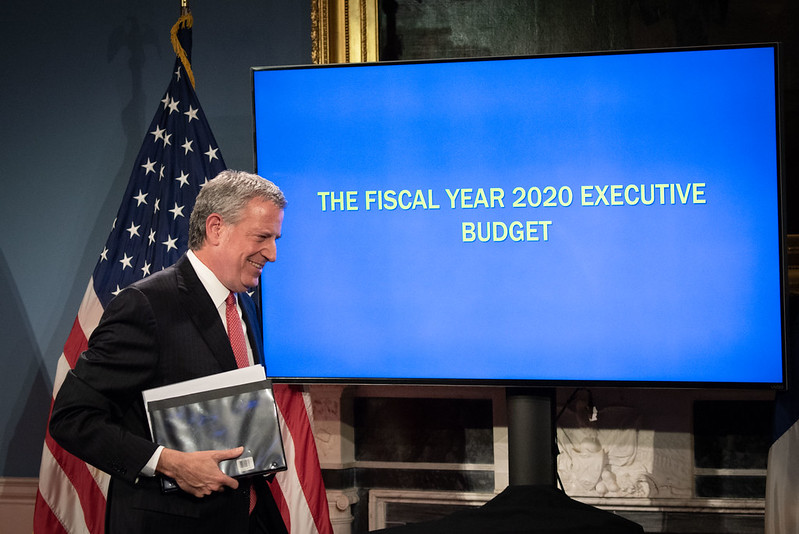 Some of us in government are old enough to remember when Mayor Bill de Blasio took office almost eight years ago, fulminating to any reporter in earshot about how his predecessor, Michael Bloomberg, left him with expired labor contracts that presented the city with an “unprecedented” fiscal challenge.

“The future should not have been mortgaged in this way. But it was by the previous administration and we will have to grapple with it,” he told The Observer at the time.

Talk about the pot calling the kettle black.

When he takes office less than a month from now, incoming Mayor Eric Adams will have to deal with the financial mess de Blasio is leaving behind. Only, it’s a lot bigger.

After years of treating the city’s budget the way rock bands treat hotel rooms, Mayor de Blasio will be handing his successor a city in far worse financial shape than the one he took the helm of in 2014. Like de Blasio before him, Adams will also have to negotiate expired municipal labor contracts in short order – but this time, with a depleted labor reserve, a projected total of $8 billion in deficits in the next three fiscal years, and nearly $4 billion in annual debt service. And he will have to grapple with all this amid a global pandemic that is fueling hysteria and uncertainty, skyrocketing inflation, and a dragging economic recession.

Even under the best circumstances, it would be extremely difficult for the Adams administration to correct eight years of mayoral monetary malfeasance, in which an already bloated budget grew by 36%, or three times the rate of inflation. Nor will he be able to lessen the city’s long-term pension obligations, which are much larger now due a workforce that has grown by more than 35,000 during the de Blasio administration.

But there is one thing Mayor Adams can do almost immediately to put this city on a more sound fiscal footing: shore up the city’s cash reserves.

This is not a new idea, of course, but it was not entirely possible under the terms of the New York State Financial Emergency Act (FEA), passed in late 1975 after New York City came just hours from bankruptcy. The FEA imposed strict accounting rules on the city, including requiring an annually balanced budget. So for decades, whenever the city has had a budget surplus, the best we could do was stash some money in the Retiree Health Benefits Fund and roll over the rest to “pre-pay” future debt. But none of this could be used to plug current budget gaps.

This restriction was finally removed by state law in 2020, which earlier this year led to the creation of the Revenue Stabilization Fund, a real unrestricted rainy day fund. The Revenue Stabilization Fund would have been the perfect place to park at least some of the $22 billion the city received in federal aid this year, particularly about $6 billion that had no strings attached, to help pay for future budget gaps and as a down payment for labor contracts. Instead, the mayor squandered this once-in-a-generation cash infusion on costly recurring programs, like mental health services and rental vouchers.

The city’s rainy day fund now sits at $1 billion, or less than 1% of the $100 billion-plus operating budget. The nation’s second largest city, Los Angeles, has an unrestricted cash reserve of 17%. Dallas has a reserve of 25%. Phoenix and San Antonio have cash reserves of more than 28% each.

Our city’s cash reserves are not only woefully inadequate to meet future fiscal challenges, but they also cost us significantly more in annual debt payments. To achieve the highest level of creditworthiness — AAA — rating agencies require municipalities to have a minimum 15% budget reserve. New York City has AA, AA2, and AA- ratings from, respectively, Standard & Poor's, Moody's, and Fitch — the big three rating agencies. That is several tiers lower than AAA. Just like a personal credit score, a lower municipal credit rating means the city has to pay higher interest rates on loans, and when you borrow tens of billions of dollars for capital projects, like New York City does, just one percentage point translates into tens of millions more in payments.

Of the many bad decisions this mayor has made, mortgaging our future for his political projects was one of the most damaging. Let us hope Mayor Adams does not follow in the footsteps of his profligate predecessor and that he not only believes this city is worth saving, but worth having more savings.