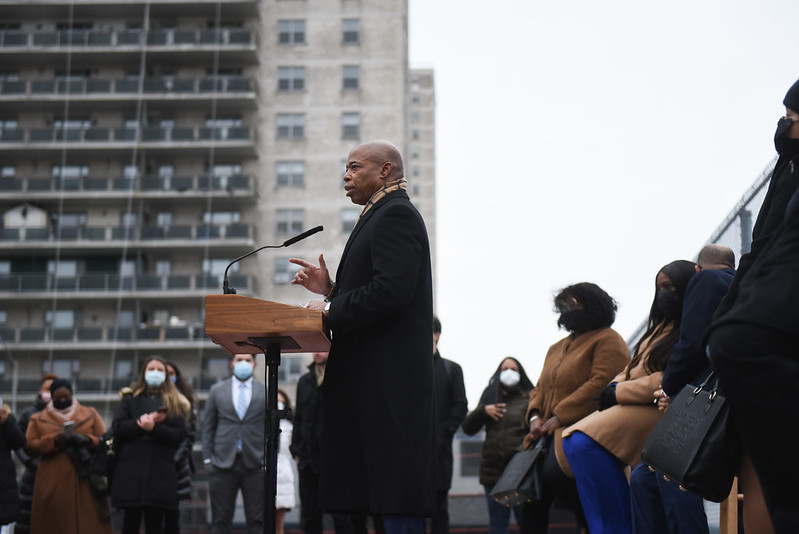 Voters have thrust Eric Adams upon history. He has taken office as the city faces one of its greatest crises—a resurging covid pandemic as a result of the highly-contagious Omicron variant—along with the usual city troubles of crime, homelessness, and mental illness, among others.

Yet, Adams is hardly the first mayor to be sworn in during a crisis. What historical lessons exist for Mayor Adams?

Mayor Michael Bloomberg was sworn into office four months after September 11, 2001, as the city also faced an economic crisis and the uncertainty of a world engulfed in the reality of terrorism and war. New York City had to sharpen its defense against external, global threats in addition to the usual street crime while ensuring that its economy did not fully crumble and keeping people from fleeing the city.

Mayor Bloomberg tackled these crises with resolve. He quickly assembled a team with government and private sector experience. To deal with the economic crisis, he initiated building projects throughout the boroughs that brought in needed jobs and showed the world that the city was resilient. Understanding the necessity of improved technology, Bloomberg sought the expansion of the technology sector, which also brought in jobs. Seeing the need to streamline government services, Bloomberg merged some city departments and agencies, and introduced the 311 system. And understanding the threats to safety, he appointed as police commissioner Ray Kelly, who had first served in the role under Mayor David Dinkins, to lead on public safety and launch an NYPD counter-terrorism unit.

Within the first two years of his mayoralty, New York City not only balanced its budget (required by law after the economic crisis of the ’70s) but reported budget surpluses. Crime also continued to trend downward.

Granted, Bloomberg’s tenure included very real and troubling controversy, like the awful stop-and-frisk program. Yet his leadership of the city amid the crisis of his ascent was a model.

In 1978, Mayor Ed Koch likewise inherited a city in crisis. Koch stepped into his City Hall position facing one of the biggest financial crises since the Great Depression. Upon taking office, he realized that his predecessor, Abe Beame, had underestimated the vast budget deficit the city faced. The city was in the hole for $240 million, $130 million more than Beame had mentioned. Undeterred by the crisis, Koch set about learning the intricacies of the city’s complicated budget, using his budget director, Jim Brigham, as a personal tutor.

Like Bloomberg, Koch organized a team of senior administration officials, in this case to develop a financial plan that would restore the city’s fiscal health. Historian Jonathan Soffer in his book on the Koch era explains that the team worked arduously to move the city forward, essentially “working two jobs,” meeting in a building with little heat, and working well into the night crunching numbers and brainstorming together. The result was a four-year financial plan that, through difficult cuts and strategic spending, balanced the books within a few years.

Of course, we know all too well the wounds Koch inflicted on himself, wounds that led to his defeat to David Dinkins in 1989. But Koch’s leadership at the start of his tenure helped the city turn the corner.

John Lindsay’s mayoralty started with a transit strike that paralyzed the city for 12 days, a situation that grew out of issues pre-dating Lindsay’s official start. In fact, as mayor-elect, Lindsay spent much of December in talks with outgoing mayor Robert Wagner, the infamous Transit Workers Union chief, Mike Quill, and others. The situation was so dire, requiring round-the-clock attention, that Lindsay and top aides slept in cots in City Hall on his very night as mayor.

Though negotiations did not go as expected, and though the final agreement closely reflected Quill’s original ask, Lindsay took control of the public narrative early on, giving New Yorkers the perception he was in control of a dire situation. One poll taken after the strike indicated that 75% of New Yorkers approved of Lindsay’s handling of the situation, perhaps proving that Lindsay’s direct contact through the press and speeches had had the desired impact on public opinion.

All three of these mayors handled their crises in similar ways: with sound management skills, by dealing with major challenges head on, by surrounding themselves with a competent team, and by communicating consistently and honestly with city residents. These are traits that Mayor Adams would be wise to follow. Certainly in this, his first week, the mayor seems to be showing that he is in control and ready to lead New York City forward through this challenging time.