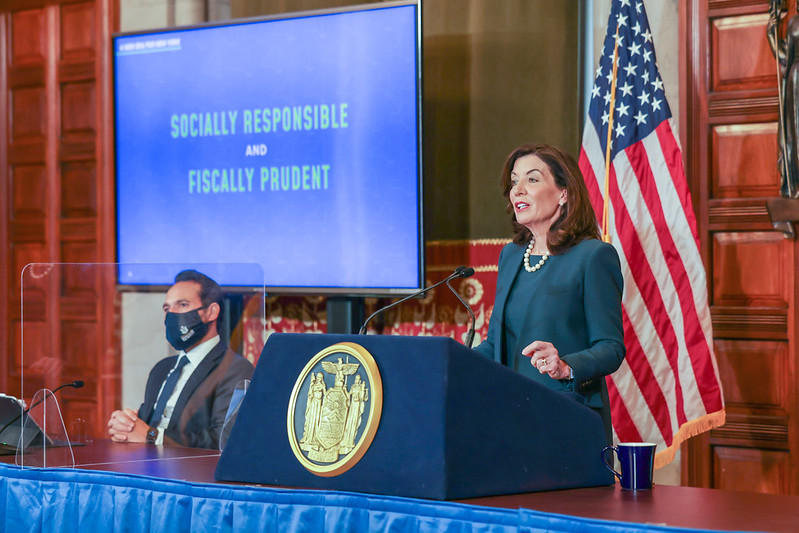 Now that Governor Hochul’s State of the State address and budget presentation have been delivered, the drumbeat of advocates, interest groups, legislators and other officials seeking increased spending will grow louder. With the primary election in only six months the temptation is strong to give everyone at least some of what they want. But, flush as the state’s coffers are right now, New York cannot afford to do it all and difficult decisions that make some important groups unhappy must be made.

The State financial plan update included in the Executive Budget shows that over the five-year period of fiscal years 2022-2027, State Operating Funds disbursements will increase by almost $26 billion, an average of 4.1% annually, higher than the growth rates prior to the pandemic. Once the substantial one-time federal funds that supplement state-generated revenue are exhausted, the State will have to fund all the programs already included in the budget on its own.

While Budget Director Robert Mujica asserts that this can be done with no deficits all the way through fiscal year 2027, he concedes that the optimistic projections for state revenue growth could change because of the continued impact of the pandemic or for other unforeseen reasons. And the generous spending included in the governor’s budget depends on the ‘temporary’ multi-year tax increases on high-earning residents and corporations adopted last year that, notwithstanding Mujica's recent assurance to the contrary, could be incentivizing wealthy businesses and individuals to leave the state.

It is noteworthy and wise that Governor Hochul proposes to set aside $5 billion in each of the next two fiscal years in reserves in case of a ‘rainy day.’ But it is difficult to believe that the Legislature will go along or that the Governor will be able to resist contentions from legislators, advocates, and others that the money is needed for a variety of worthy causes, even though she has already set aside $2 billion for covid-related needs to be allocated in consultation with the Legislature.

Some actions the governor has already taken are cause for concern. She announced that the state will fully implement the exorbitant and poorly-targeted increases in school aid required by the lawsuit filed by the Campaign for Fiscal Equity, giving all school districts increases even though over $2 billion a year is already provided to districts that have enough to fund a sound basic education for all their students. And she recently signed 16 bills passed by the Legislature that ‘sweeten’ pension benefits for public employees, the type of bills that were routinely vetoed by Governor Cuomo because of their long-term costs.

An example of the kind of well-intentioned but costly and unwise initiatives that should be avoided is the “New Deal for CUNY” campaign to make all the community and senior colleges in the CUNY system tuition free for all New York residents. A bill to implement this policy was introduced in both the Senate and Assembly and has the support of a number of members as well as student groups and the union representing CUNY faculty.

The amount of state support to CUNY (about $1.7 billion before the new additions) is two times the operating spending of the State Police and four times more than operating spending on parks and the environment. The governor’s budget adds approximately $350 million in additional operating subsidies to SUNY and CUNY as well as funding tuition assistance grants for part-time students.

Most resident CUNY students pay no tuition because of their eligibility for city, state, and federal grants. Tuition only covers about one quarter of CUNY’s costs; to eliminate this source of revenue would make the 23 campuses even more dependent on the state of New York’s economy and political calculations than is already the case. That is why legislation was enacted in 2020 to allow for regular, small increases in tuition. It should not be undone.

I am an ardent believer in the power of CUNY — I helped to launch CUNY ASAP, the most successful community college completion program in the country — and fear that eliminating its relatively small tuition payments will make its financial status more precarious.

Nor should the similar, smart practice of regular, small fare and toll increases to help the MTA keep up with inflation be discontinued. Adopted in 2009, the policy ameliorated the prior pattern of periodic significant fare and toll increases that were fiscally and politically wrenching. The 2020 increase was postponed due to the pandemic and, thanks to a $6 billion aid infusion from federal relief funds, the governor’s budget postpones the 2022 increase as well. Several types of discounts for multiple rides have also been instituted.

As ridership grows back towards pre-pandemic levels, the regular fare increases should be resumed. To maintain affordability for those with lower incomes, New York City should continue robust efforts to promote its Fair Fares program, which provides half-price transit service to lower-income residents. As with CUNY, our public transit system needs reasonable user fees to provide some level of fiscal stability.

There are a number of other steps that should be taken to put the state on a firm financial footing, such as shifting economic development efforts away from the billions spent on tax incentives and business subsidies, and rightsizing and better managing capital spending.

Saying no to seemingly attractive policies that increase state spending is going to be very tough when the state seems awash in money and there is an election imminent. It may be easy and expedient to provide as many ‘free’ services as possible now, but it will be extremely difficult to undo these policies down the road when trade-offs between these and other services for the neediest New Yorkers, like the growing Medicaid program, become necessary. For everyone’s sake and the future of New York, the governor needs to hold the line on building up reserves.