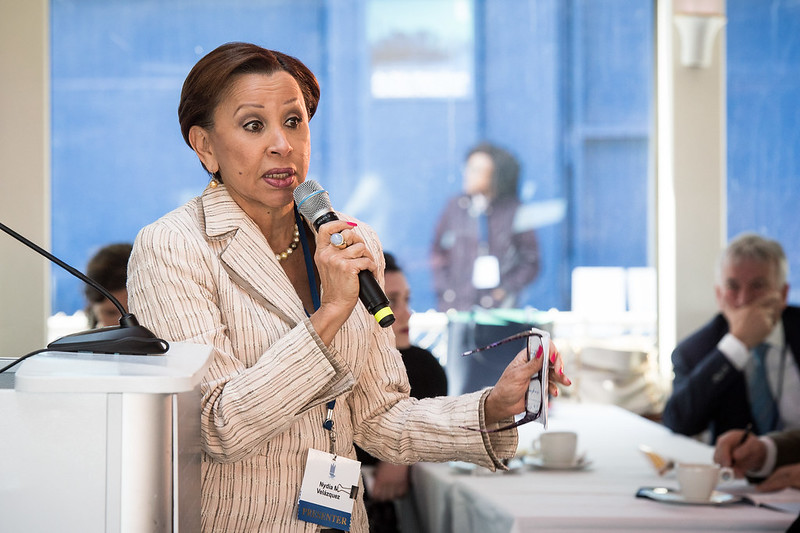 The New York State Legislature has passed, and Governor Hochul has signed, new district maps for the House of Representatives, the State Assembly, and the State Senate. What do these new lines mean for Latino representation?

While space limitations prohibit me from providing an exhaustive analysis, several new district lines are worth noting. Let us begin with Congress.

Several neighborhoods in NY-7, including Sunset Park and Red Hook, with their sizable Latino presences, have been drawn out of Velázquez’s district and into Malliotakis’. Rep. Velázquez has represented Sunset Park since her election to Congress in 1992 and the neighborhood was included in that district at a time when an additional Latino-majority district was sought. Current opponents of the dismantling of parts of Velázquez’s district point to the potential of voting dilution, since Latinos in Sunset Park and other neighborhoods will now become part of a non-Latino majority district.

Despite all the changes, particularly the possibility of voting dilution, the Latino presence in the new Velázquez district among the voting population has not shifted much, increasing by 4,000 Latino voters from the current lines. The increase is a result of the new 7th district taking in other parts of Queens that Velázquez had not previously represented, namely portions of Ozone Park.

The Latino voting population in the new NY-13, represented by Rep. Adriano Espaillat, has not shifted much, and Rep. Alexandria Ocasio-Cortez’s Latino constituency in her district, NY-14, remains largely unchanged. Interestingly enough, Rep. Ritchie Torres, who represents a Latino-majority district whose Latino representation goes back to Herman Badillo, has lost 11,000 Latino voters (mostly in University Heights), while gaining an additional 18,000 white voters, largely a result of the district’s move north to include Riverdale.

In relation to Latino politics and representation, perhaps the more drastic changes to district lines can be found in the Senate and Assembly districts. Of New York City’s 95 state legislative districts, there are currently five Latinos in the 63-seat State Senate and 11 in the 150-seat Assembly.

Starting in Manhattan, we can begin our exploration of changes in the historic Latino neighborhood of East Harlem. If there ever were a prime example of how communities can be splintered electorally, East Harlem is the one. East Harlem, a geographically compact location that is majority-Latino with a sizable African-American population, will soon be represented by three state senators instead of the current two. Yes, three senators for one community.

Under the new lines, East Harlem will be represented in the State Senate by Senators Cordell Cleare, Michael Gianaris, and Jose Serrano, assuming they all win reelection this year. The East Harlem State Senate seat has had historic importance since Olga Mendez won the seat in 1978, becoming the first Puerto Rican Latina elected to a state legislature in the country.

In Queens, a new State Senate district has been created, what will be the 17th District, part of how the new maps reflect population shifts favoring New York City and a correction to previously gerrymandered districts to favor Republicans outside the city.

Observers note that the carving out of this seat is a result of the increase in the Latino population in Queens and that in essence this becomes a new “Latino seat.” However, the data discloses something entirely different. The Redistricting and You data, excellently compiled by Steven Romalewski at the Center for Urban Research at the CUNY Graduate Center, demonstrates that in overall population, Latinos make up 38% of the population in this new district, just a 6% increase from the current Senate lines. In voting age population, Latinos make up 36% of the population, also a 6% increase.

However, when one considers voter registration numbers, Latinos only outnumber the next highest ethnic group (non-Hispanic whites) by 894. When one takes voting participation into account, the numbers would indicate even more that this district is certainly not a “Latino seat,” at least not in the immediate future. Among Democratic voters, non-Hispanic whites in this new district outnumber Latinos by over 5,200 voters, a gap of utmost importance given how often elections in New York City are determined by the Democratic primary.