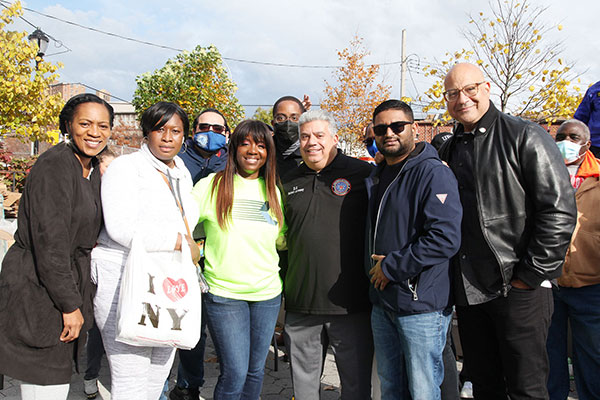 What does a safe community look like? We know the answer, because such communities exist, usually in well-resourced, predominantly white neighborhoods where people have the resources to meet their basic needs—including healthy food, shelter, transportation, clean and inviting public spaces, childcare, education, and health care. A safe community is also a place where people know and trust their neighbors, take care of each other, hold each other accountable, and resolve conflicts peacefully when they arise.

Because safety is rooted in community wellness and community relationships, the work of building long-term safety can only be done effectively by the community, in the community. And that requires investment. Law enforcement, other government agencies, and outside civic institutions should play a supporting role by shifting their power and resources to community members to build the future they want.

Transferring power from law enforcement to community members is necessary because arrests and prosecutions alone do not create lasting public safety. Temporarily incarcerating someone who causes harm only prevents further harm while they are incarcerated (at great cost to them, their family, and the community). Even putting someone through a court-mandated program outside of jail often has little long-term impact on public safety if the program has no organic connection to the person’s life after the mandated period ends. While well-intended, such programs all too easily become exercises in checking boxes and jumping through hoops just to get out from under the court’s thumb rather than opportunities for real transformation.

Enduring public safety is achieved by integrating people into a stabilizing and supportive social network in their own community. It requires empowering grassroots organizations with the resources and autonomy they need to meet struggling people where they are and build trust without the threat of state force looming in the background. And it requires repairing the harm that has been inflicted on poor and working-class communities of color by generations of systemic racism and economic exploitation. Government must direct public resources into communities where poverty, trauma, and despair are fueling violence and empower community members to decide how public resources can best be used to enhance community wellness.

We have long known that good schools, family-supporting jobs, dignified housing, care for those who are mentally or physically ill, and neighbors who look out for and are accountable to each other are key ingredients for public safety. Resolving conflict by calling police and endangering a community member’s liberty, or even their life, should be a last resort. And yet the pervasive and coercive presence of law enforcement has been normalized in poor and working-class communities of color to a degree that would never be accepted in wealthy, predominantly white communities. The movement for Black lives opened up a serious conversation about shifting public resources away from the law enforcement responses that we know are harmful to investments in the basic civic goods and strong community connections that we know can produce lasting safety. Now we need to follow through.

As the Brooklyn District Attorney and as a long-time community leader in Brownsville, Brooklyn, we have come together to transform public safety in one community by shifting power. On one side of this transformation, the DA’s Office is giving up power over a significant number of misdemeanor cases—something prosecutors are normally loath to do—by diverting those cases to community-based organizations and declining to prosecute the individuals involved. On the other side, Brownsville Think Tank Matters (or BTTM, where Cyrus Smith serves Chief Operating Officer) and other community-based organizations are taking up the power and responsibility to redress harm and keep the community safe.

Cases include criminal mischief, petit larceny, possession of stolen property, and misdemeanor assault. They hold people accountable and support them through a sustained process of changing their life circumstances so that they will not harm the community again in the future.

When the DA’s Office first approached BTTM about partnering, Cyrus was skeptical. Like many in his community, he’d had negative experiences with law enforcement, and he was dubious that a partnership with a law enforcement agency could be positive for his clients. It took months of negotiation and baby steps to build the trust we now have, but it has been more than worth it.

The key to the success of our diversion partnership is that the DA’s Office declines to prosecute early in the process, instead of holding the threat of prosecution over the person’s head. The office hands over power and responsibility to BTTM and pays BTTM to stay engaged with the person beyond the duration of the case, keeping them on a positive path. Without law enforcement coercion, BTTM has the credibility to establish trusting long-term relationships with people using resources that would otherwise go to prosecutions.

BTTM’s engagement starts with an accountability conversation about what the person could have done differently to avoid getting arrested, and how they can avoid police contact in the future. Then they focus on how BTTM can help the person reach their life goals. They talk about how they can work toward the person’s individual goals in ways that will also advance community goals.

Many people who get arrested for misdemeanors are unemployed or underemployed, so BTTM helps them develop a 5-to-7-year plan for obtaining a good-paying job. It’s a very different mindset than “what can we do to make sure this person doesn’t get arrested again in the next six months?” Obviously, we don’t want the person to harm someone or have further criminal justice contact, but preventing those outcomes is really a byproduct of helping them look at their life holistically, establishing goals, and opening doors of opportunity for them to achieve their goals. When people have goals, and the tools to achieve them, they have hope. Giving people hope is transformative.

This process isn’t a quick fix, but neither is jail. Most people come out of jail worse off than when they went in, and many cycle through the system dozens of times. If a BTTM client gets rearrested and goes to jail, that person and their family knows they will return to a supportive network that remains committed to their success. BTTM doesn’t give up on people, which encourages their clients not to give up on themselves.

The Brooklyn DA’s Office and BTTM are proud to be part of this transformation, but we are not alone. The 73rd Precinct of the NYPD, which covers Brownsville, is also giving up a degree of power to the community through an initiative called the Brownsville Safety Alliance. The Alliance is a coalition of community organizations that works to improve safety in specific neighborhood locations that have been plagued by crime while reducing contact between police and residents.

The Brownsville Safety Alliance relies on trusted community members to create safety without heavy-handed law enforcement. It identifies locations that have a lot of low-level criminal activity or a history of shootings. The police pull back from these locations for five days and community organizations take responsibility for the area. Violence interrupters (affiliated with the city’s Crisis Management System) maintain a presence to intervene and deescalate conflicts. Other community organizations provide referrals for social services and distribute free groceries.

The DA’s Office is present, but not to prosecute. Instead, the office provides information about re-entry services, victim services, and opportunities to seal convictions. Peer counselors, funded by the DA’s Office but employed by a community non-profit, distribute Narcan kits and train people on how to use them to reverse overdoses. The police are a few blocks away to respond if necessary.

So far, the areas that have been identified by the Brownsville Safety Alliance have experienced less criminal activity, and less contact between police and residents, than when police are on routine patrol.

During a recent Brownsville Safety Alliance week, a violence interrupter affiliated with Brownsville In, Violence Out saw someone pass a gun to someone else and noticed them eying a third individual. He approached the men with the gun and deescalated the situation. They had been selling drugs on that corner to support themselves and their families and were about to shoot someone else who had encroached on their turf. The violence interrupter peacefully secured the gun and promised the would-be shooter he would help him obtain food and counseling as well as training and certification for a better job than selling drugs. No one got shot and no one got sent to prison. Instead, a long-time community resident who has served time in prison for violence himself prevented others from going down that path.

Another initiative called NeighborhoodStat, launched in 2014 by the Mayor’s Office of Criminal Justice, empowers neighborhood residents to set local budgetary priorities and then hold city agencies accountable for delivering on those priorities. By bringing both government data and local knowledge to the table, NeighborhoodStat can direct resources from all relevant agencies to the areas of greatest need and serve as a vehicle for residents to hold agencies accountable, both for long-term investments and for routine constituent service matters.

The next step in Brownsville is to integrate all of the efforts we have described here into a Neighborhood Safety Hub to manage community-based diversion.

Police will be able to take people who would otherwise be arrested straight to the Hub for services, so those cases will never come to the DA’s Office. The Hub will also be a visible one-stop shop where community residents can seek services and opportunities. It will provide help to those who are high risk (because of involvement with guns and gangs), and those who are just one bad break away from being destabilized. The Hub will provide the organizations that make up the Brownsville Safety Alliance a permanent home, institutionalizing their role in keeping the community safe.