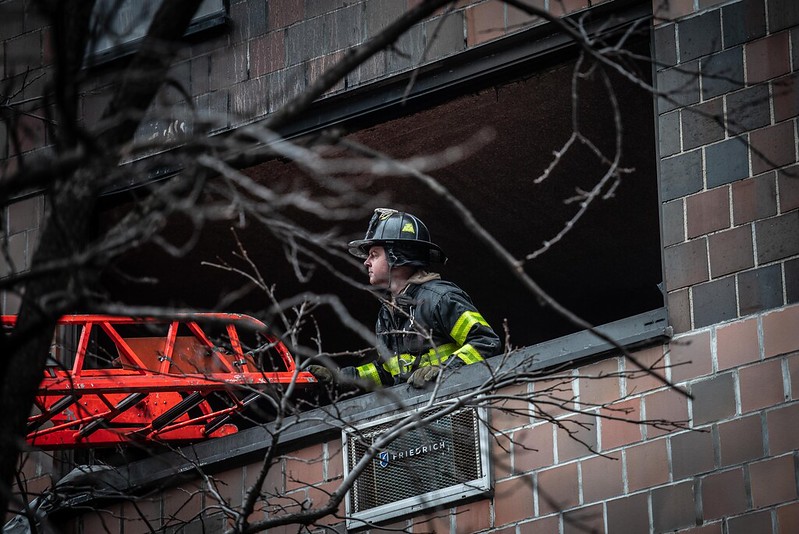 FDNY on the scene in the Bronx (photo: Michael Appleton/Mayoral Photography Office)

Walking up four floors in a friend’s apartment building the other day I noticed something you might not: on almost every floor, the door to the stairwell was open. Someone had just casually propped them open, maybe to make going in and out easier because the doors are so heavy. I also notice some of the apartment doors that are just simply open, not propped up, when they should be self-closing based on a recent law passed by the City Council mandated that building owners across the New York City ensure all apartment doors are self-closing if they provide access to stairwells.

Noticing something as seemingly innocuous as this is a funny habit I picked up because of my work, and it’s especially relevant these days because open doors like these contributed to a recent tragedy: the fire at the Twin Parks housing complex in the Bronx earlier this year that left 19 dead and stunned the city. Yes, the innocent act of propping open a stairwell or apartment door can be deadly, as can malfunctioning doors. While the main cause of the fire appeared to be an electric space heater, open doors allowed and encouraged smoke to spread upward. It’s a tragic but valuable lesson and we must ensure that all apartment and stairwell doors work as required and that they aren’t left propped open.

Fire doors and self-closing apartment doors are designed to help contain smoke, since the main cause of fire death is often smoke inhalation and not the actual flames. That’s what happened at Twin Parks – in addition to the apartment door where the fire originated, at least one stairwell fire door was propped open, and smoke billowed throughout the building. Properly functioning fire doors can minimize or eliminate devastating tragedies like this, and residents of New York City need to be educated about them and the seemingly mundane but absolutely crucial purpose they serve.

But that’s not all. Education campaigns only go so far – fire doors will malfunction if they are not assembled properly or maintained. They need to be inspected by trained personnel; inspections that should be mandatory and enforced by the city.

There’s the rub beyond city law.

The National Fire Protection Association (NFPA) has more than 300 standards to minimize the impacts of a fire. NFPA Federal Code 80 states that “fire door assemblies shall be inspected and tested not less than annually and a written record of the installation shall be signed and kept for inspection by the authority having jurisdiction.”

The problem -- not just in New York City, but in most jurisdictions -- is that this code is not strictly enforced. In other words, thousands of buildings around New York City most likely have not had their fire doors inspected, not annually nor even in the last five years. We have no way of knowing whether fire doors have working smoke seals or correct latching to ensure they automatically close in case of a fire. The fire department certainly doesn’t have the capacity to inspect them; firefighters have more than enough on their hands responding to emergencies.

This is why New York City needs an Office of Fire Door Assembly, Safety and Protection within city government. There is precedent for this.

You have probably noticed that elevators in New York City have the date and signature of the inspector who last inspected the elevator visible to the riders. Property owners are already responsible for regular elevator inspections by licensed technicians. These policies were put in place and strengthened to make elevators safer after a series of tragic incidents. Something similar noting when fire doors were last inspected should be clearly visible close to the main entrance of New York City buildings.

Only health care facilities in New York City now receive such inspections, which are federally mandated, and rightfully so.

We need a three-pronged approach.

Educate building operators, landlords, and tenants on why a fire door is there in the first place, and that it must always be closed when someone is not passing through it.

Ensure that fire doors are inspected by trained personnel.

To do all this, we need a dedicated office within city government and a revenue stream to meet the standards of NFPA 80. Otherwise, our city is not taking all the necessary precautions to ensure that the tragedy of Twin Parks is never repeated.

***
Jacob Wexler, FDAI, is an accredited consultant in the door and hardware industry specializing in fire door assemblies and acoustical door assemblies.