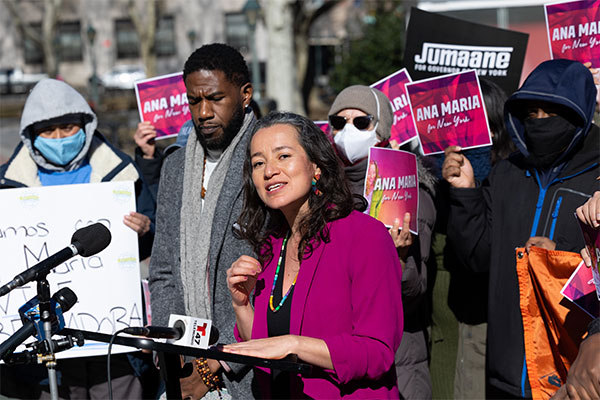 It is said that International Women’s Day, which we celebrate today, March 8, started in 1857 when a group of women garment and textile workers marched in New York City for better wages and working conditions. Though this origin story is probably a myth — in fact, Women’s Day originated with a suffragist march through Manhattan six decades later — its popularity underscores that women’s liberation will only come when we achieve economic justice.

The pandemic made more visible the impossible challenge that women, and our families, face every day trying to balance the duties of care and work in an economy in which affordable childcare, housing, and healthcare are hard to find. At the same time, the pandemic exacerbated gender inequalities and laid bare a fundamental and often ignored truth;  the success of our communities relies on the jobs done overwhelmingly by women, especially those of color.

For these women — providing childcare, health care, and keeping their families in their homes, working in restaurants, as street vendors and more — a return to a pre-pandemic “normal” is also untenable. We cannot simply go back to systems that didn’t work. New York must act with urgency and vision to deliver real economic gains for women, and, by extension, all communities.

Across the United States, nearly 2 million women left the workforce during the pandemic. Many have not returned. In New York, unemployment remains well above the national average. A recent report found that women with children in the New York metropolitan region were 70% more likely than men to be staying out of the workforce. According to the same study, women of color have been particularly hard hit, with higher unemployment rates than for white women.

These direct economic harms to women go hand in hand with more insidious forms of violence. In the pandemic’s early months, women were 20% more likely than men to experience hunger. At the same time, intimate partner violence has shot up. Ensuring women’s rights is not solely an economic matter, of course, but the interconnection of all these harms makes clear that economic progress is a crucial piece of the puzzle.

New York can take concrete steps towards addressing these issues, but we need leaders who will prioritize the dignity of women and rise to the occasion. Here’s some of what we can and should do this year:

First, we must pass universal childcare. A recent statewide study demonstrated that our childcare system is broken. Most parents either cannot afford to pay for childcare or live in a community without sufficient access to care services. Meanwhile, childcare providers — most of whom are women — are receiving inadequate wages and struggling to make ends meet. This system serves no one’s interest, least of all women. It is time for New York to step up and deliver a childcare system that works for all.

Second, we need to provide secure housing for all. This year, New York can take a critical step by passing “good cause” eviction legislation, which would stop landlords from evicting tenants who have been paying their rent and limit exorbitant rent increases. In the long term, we must work to transform quality housing into a right for all New York residents.

Third, we must raise workers’ wages and fund excluded workers. Tipped workers in the restaurant industry — a critical source of employment for women — are still not guaranteed the $15 an hour minimum wage. Governor Hochul has failed to lead on this issue. She must stand up for workers and ensure they receive a fair wage.

We should not stop with restaurant workers. We should also boost wages for home care workers — again, primarily women of color — and provide hazard pay to hospital workers.

Our state must also end the exclusion of workers from the state’s safety net by enacting “Excluded No More” legislation as part of the budget. This would replenish the historic, but depleted, Excluded Workers Fund with $3 billion and a permanent system for inclusion, to cover all workers who were left out from other pandemic relief while often doing essential work for our state.

Finally, we must also address gaping chasms in health coverage and care. This year’s budget must include “Coverage for All” legislation that would ensure that all low-income New Yorkers, regardless of immigration status, can access an Essential Plan. New York must also pass the New York Health Act to ensure truly universal access coverage and care.

As the mythical origins of International Women’s Day illustrate, the fight for women’s rights cannot be separated from the fight for economic gains like universal childcare, living wages, and dignified housing. But the mythical, and actual, origin of Women’s Day illustrates something else important too: it all started in New York. It’s time for New York to once again lead the fight for women’s liberation by electing leaders with the courage to fight for our economic rights. The state’s women know that we cannot return to the way things were before the pandemic. It’s time our leaders did too.

***
Ana Maria Archila is a Democratic candidate for Lieutenant Governor. She has been a leader in New York and nationally in the fight for immigrant rights, worker justice, LGBTQ rights, and women’s rights for two decades. On Twitter @AnaMariaforNY.