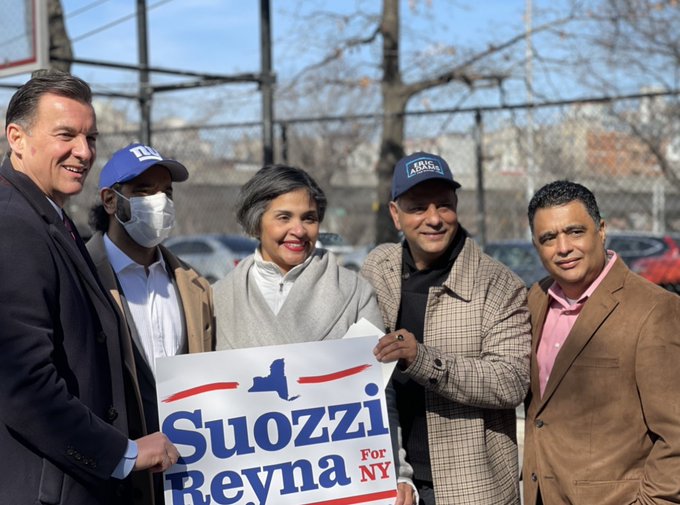 The Latino vote in New York is, thankfully, becoming the important point of conversation it should be. While there’s a ways to go, there is more discussion happening -- including a variety of political debates, via the inimitable work of Errol Louis in one of his recent columns as well as a podcast episode he dedicated to the Latino vote with me as his guest, and through this series of pieces and associated podcasts published by Gotham Gazette, among other sources.

I have sought to explicate the intricacies of this burgeoning ethnic group for a number of years, largely through this platform. Despite the increased attention, Latinos seem to still often be an afterthought for many elected and party officials, as was made evident by the recent selection of speakers at last month’s state Democratic convention. No Latinos were on the original list of speakers, and it was only after a number of prominent Latinos complained about the snub that party officials scrambled to include three Latinos on the list.

Snubbed or not, disregarded or not, Latinos are and will continue to be an important voting constituency in New York City and State elections. Some politicians understand this, like Tom Suozzi, a member of Congress who is now aspiring to defeat Governor Kathy Hochul and others in June’s Democratic primary. Suozzi not only named former Bronx Borough President Fernando Ferrer the chair of his campaign; he also named Diana Reyna, former City Council member and deputy Brooklyn Borough President, as his lieutenant governor running-mate.

New York City Public Advocate Jumaane Williams, also running for the Democratic nomination for Governor, and his supporters in the Working Families Party also appear to be aware of the importance of the Latino vote, as they recruited Ana Maria Archila to run for Lieutenant Governor as Williams’ running-mate. (Candidates for governor and lieutenant governor are not linked on the primary ballot, but they often present themselves to voters as running-mates.)

Will Latinos play a key role in who wins the governorship this year? Will Latinos defy previous voting patterns and turn out to vote in larger numbers?

The answer to the first question is a clear yes. The second question is more complicated, and my answer will come in the form of a challenge.

According to my analysis of voter rolls, Latinos are currently 18% of the entire state Democratic electorate, with 1,152,950 voters across the Empire State. This 18% represents the largest share of Latino Democratic voters in state history. Of the 1.15 million Latino voters, 862,255 are in New York City. That is a whopping 75% of the Latino electorate in the five boroughs.

Hence, any statewide candidate who does not visit the storefront cuchifritos in East Harlem or devour the excellent mangus at establishments in Washington Heights and the Bronx or stop by the taquerias in Sunset Park and visit the tree-lined streets of Corona and Elmhurst, will do so at their own peril.

Voter registration numbers, however, are not necessarily the equivalent of voting power. Voting power for Latinos will come once Latinos recognize that proper political representation and adequate policy attention to their plight can only come through robust and consistent voting participation.

As for proper representation, its lack is evident given the fact that among state legislators in New York City, only 17% are Latino, though Latinos represent 29% of the entire city population.

While Latinos continue to increase in the voting population, the fact remains that only 14% of the entire Democratic electorate in the last gubernatorial primary was Latino. To be sure, the low turnout rates among Latinos is not a dilemma unique to New York, as I have mentioned here before. Yet the dilemma is here and must be dealt with.

On a more positive note, that 14% in 2018 was an increase compared to previous years, and even more importantly, since that last gubernatorial primary, Latino voting participation in New York City has already increased by 4% in the 2020 and 2022 primaries.

If the patterns of the last few years continue, I can foresee a scenario in which close to 250,000 Latinos could turn out statewide to vote in this June’s Democratic primary. This would represent the largest ever turnout among Latinos in New York.

What can contribute to this potential increase of Latino voters?

One potential for increased Latino voting participation could lie in the fact that there could be two Latinas on the ballot for lieutenant governor, Reyna and Archila. Having two Latinas vying for the same position -- against incumbent Lt. Gov. Brian Benjamin -- may not be the most conducive to success for their respective candidacies. Such a scenario pits two Latinas against each other, potentially splitting the Latino vote for this position. Yet the Archila and Reyna candidacies can be a potential boon for Latino voting participation, provided that their campaigns invest enough resources (money, time, personnel) in Latino communities.

Archila’s and Reyna’s candidacies could be a bigger boost for Latino voters than the candidates at the top of the ballot—expected to include Hochul, Suozzi, and Williams, to name the top tier.

Previous studies point to increased voting among Latinos when viable Latino candidates are on the ballot. The well-respected Latino political scientist Matt Barreto, with Mario Villareal and Nathan Woods for instance, have studied Latino voting patterns in high density Latino precincts in California and observed that the highest Latino turnout rates in Los Angeles occurred when a Latino was at the top of the ballot for mayor, both within the nonpartisan primaries and in the general elections.

I have used an analysis like Barreto’s to investigate Latino voting patterns in New York and have also found that Latino voting participation has increased when a viable Latino has been at the top of the ballot.

When observing Fernando Ferrer’s candidacy for mayor of New York City in 2001, I noted an increase in voter participation within the New York precincts with the highest Latino populations in comparison with other mayoral primaries when a viable Latino was not on the ballot. In fact, voter participation in heavily Latino precincts increased an average of 30-40% in 2005, when Ferrer became the first Latino to win a Democratic mayoral primary, compared to years with no Latino candidate at the top of the ballot.

While the position of lieutenant governor is not atop the ballot, it still is a position of importance (though not so much in the day-to-day practical operations of state government), as is evident in the Cuomo saga and the eventual rise of Kathy Hochul to the governorship. This election cycle may be the first time that viable Latino candidates will appear on the ballot for a statewide position. And for this reason, provided that the Williams-Archila and Suozzi-Reyna tickets invest in the Latino vote, there is real potential for an increase in Latino voting participation.

What role might the Kathy Hochul-Brian Benjamin ticket have in bringing out the Latino vote this June? Up to this point, I have not seen the necessary investment on the part of Governor Hochul or the state Democratic Party apparatus in the Latino vote as a possible motivating factor for an increase in Latino voting participation. Outside of a few Latino appointments, and some holdovers from the Cuomo administration, Governor Hochul has not done much to increase Latino representation in state government.

It may take two Latinas -- Archila and Reyna -- to help wake the sleeping giant that is the Latino vote in New York. It will of course take many others to contribute to the rise of Latinos in New York, but perhaps a lot more rests upon the shoulders of Archila and Reyna than they might think.