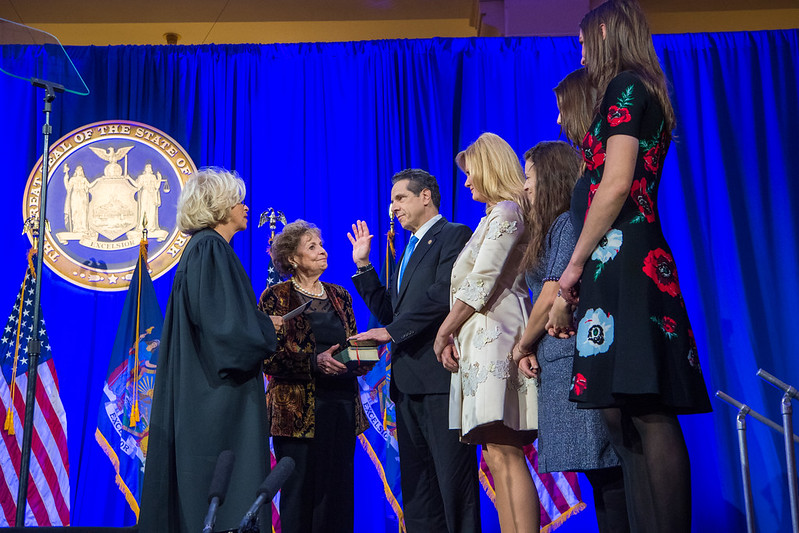 Governor Cuomo sworn in for a third term (photo: office of Andrew Cuomo)

Alexis de Tocqueville wrote in the early 19th century that "intrigue and corruption are a natural vice of elected governments; but when the head of state can be reelected these vices spread beyond bounds and compromise the very existence of the country.”

Governor Kathy Hochul apparently agrees. In her January State of the State message, delivered five months after Governor Andrew Cuomo resigned under threat of impeachment and she assumed office, she proposed “three major steps to help…restore New Yorkers’ faith in their government.” The one that got by far the most attention, and the most praise, was her call for an amendment to the state constitution to limit those elected to statewide office to two consecutive four-year terms.

Over its history, New York has changed the term of officer seven times, but has never adopted term limitations for statewide office. Meanwhile, elsewhere they’ve become the norm. Virginia limits its governor to a single consecutive term. Thirty-five states currently employ four-year terms and a two-term limit (in eight states the limits are absolute; 28 states allow a former governor to run again after a period out of office).

Governor Hochul’s proposal of term limitations draws particular attention because she is an incumbent Democratic candidate for election who might find these applied to herself. But it is Republicans - who have not won a statewide office for two decades - who have been the most persistent proponents of term limits in New York.

Lee Zeldin, the GOP convention’s choice to be its 2022 gubernatorial candidate, has called for a two-term limit for the governor to diminish “…rampant abuse and corruption that is born out of a system of limitless power.” As one element of his campaign Zeldin launched a website, TermLimitAlbany.com, and pledged to “self-limit” to two terms if elected.

Both Hochul and Zeldin are after votes in this year’s primary and, they hope, general elections. Both want to find some way to make political gain from the scandals that drove Andrew Cuomo from office. They both know, as shown by the results of a Sienna poll taken earlier this year, that term limitations for the governor is overwhelmingly supported by voters of all partisan stripes: 78% of Democratic respondents, 77% of Republicans, and 78% of independents favored Governor Hochul’s proposal.

These numbers add to the temptation to dismiss advocacy for gubernatorial term limits by candidates for the office as election year political maneuvering. Limiting the terms of statewide elected officers requires a constitutional amendment, which in New York State may be initiated either by a state constitutional convention or by a concurrent resolution of the Legislature.

New Yorkers in 2017 overwhelmingly rejected the idea of a convention. Concurrent resolutions are not subject to veto. There is no formal role for the governor in either process.

Though Hochul proposed limits for statewide offices only, presumably to enhance the prospects of success by the legislative route, there seems to be little enthusiasm in the Legislature for the potential precedent. One example: Carl Heastie, the Assembly Speaker, earlier pronounced himself “not a big fan” of the idea.

In truth, even if limits were adopted, experience elsewhere suggests that they are unlikely to have the effects that either Hochul or Zeldin predict. They will not increase trust in government. They will not reduce corruption. Yet they are still a good idea for rebalancing power in state government.

Trust: In 1958, when the question was first asked in national polls, about three-quarters of respondents in the United States said that they trusted the federal government to do the right thing almost always or most of the time. Today fewer than a quarter give a trusting response.

State and local governments have generally been trusted more than the national government, but the trend for them recently has been downward, as well (though at a lesser rate). When states are compared to each other on the degree to which they command citizen trust – which surprisingly has rarely been done — the results have been wide-ranging.

One Gallup poll completed in 2013, the most recent I could find, showed the state government of North Dakota at the top of the list, trusted by 77% of its citizens. Illinois brought up the rear, with 28% trust. New York, at 53%, was thirty-seventh. On average, the percentage of respondents in states without term limits for governor expressing trust in state government was slightly higher (64%) than in states with limits (56%). There just is little connection between the two.

Corruption: Recent years in New York have been marked by governors resigning under the threat of impeachment and legislative leaders sent to federal prison for corrupt behavior. There has been a regular drumbeat of additional allegations, investigations, and convictions for wrongdoing in office. But are these problems linked to the absence of term limits here? A look at all the states using four comparative measures of corruption showed that the answer to this question is “No.”

New York is indeed among the states with the highest levels of corruption but there is no pattern in the evidence that suggests that if we had term limits, we would have had less corruption.

Entrenched Incumbency, Concentrated Power: There have been 21 elections for governor of New York since the four-year term was introduced in 1938; 13 were won by incumbents and just three incumbents were defeated for reelection to this office over the entire 84-year period: Averell Harriman, Malcolm Wilson, and Mario Cuomo.

Six of the 13 people who have served as governor of New York since the four-year term was introduced in 1938 held the office for three or more terms: Herbert Lehman, Tom Dewey, Nelson Rockefeller, Mario Cuomo, and George Pataki, while Andrew Cuomo resigned part-way through his third term (Lehman was elected to three two-year terms before the four-year term was implemented in 1938). Another, Hugh Carey, served for two terms before voluntarily stepping down. Collectively these governors held the job for more than 90% of these 84 years.

During that same period just eight people served as state comptroller, all but one of these for multiple terms. Arthur Levitt Jr., New York’s longest serving Comptroller, was elected six times. And there were 11 different Attorneys General, five of whom were elected two or more times. Louis Lefkowitz was longest serving among these. First selected by the State Legislature to fill a vacancy, he won five following elections to the post.

Just in the course of doing their jobs, incumbents direct resources and build relationships across the state that sustain their reelection coalitions. Because they are very likely winners, campaign contributions disproportionately flow to them from those interested in influencing state policy. Campaign finance regulations make public the source of contributions to adversaries of the incumbent, increasing the risk for them. Potential opponents are discouraged or often proceed with insufficient resources to challenge effectively.

Of course, an incumbent’s decisions while in office also generate opposition. But on balance, as Assemblymember Ron Kim noted: “When an incumbent is allowed to run for reelection in perpetuity, they can become too powerful to unseat.”

Lame Duck: Rebalancing Governing Power: It is not uncommon in states with a gubernatorial term limit for the governor to begin to be regarded as a “lame duck” on the day after he or she is elected to a second term. One study suggests that certainty about when the governor must depart office leads to increased inter-institutional conflict, and the executive’s greater reliance on such formal powers as the veto, in making state policy.

Another consequence is the departure of key staff, who are likely to need to find other employment when the state’s elected leadership changes, even if there is no change in partisan control of the executive. New York governors who have decided to leave office at the end of a term tend to delay making a formal announcement of their choice as long as possible to forestall the full onset of the lame duck effect.

Hugh Carey was an exception; he announced his retirement a year before the close of his second term. Carey later said that he did this to “prepare for an orderly transition.” His Secretary, Bob Morgado, a top aide, recalled that the governor “was very, very chagrined to face a lame duck period and potentially some malaise” but chose to do so in the short-term to protect his long-term legacy of reestablishing NY State’s fiscal integrity. (See Making Experience Count, Gerald Benjamin and T. Norman Hurds (eds.) (Albany: The Rockefeller Institute, 1985).)

System Effects: Opening Political Opportunity. One of the reasons Alexander Hamilton opposed a term limit for president was that it would result in a cohort of former office-holders “wandering among the people like discontented ghosts, and sighing for a place which they were destined never more to possess.” What would former governors do who were “term limited out”? One answer is, “they would do what they have always done after serving”: Seek the presidency or a cabinet post; become rainmakers and deal-makers in downstate law firms, banks, and brokerages. Perhaps run for the U.S. Senate. This would be a significant change: no governor has become a U.S. Senator since Herbert Lehman.

As for the other statewide elected officials, they can always run for governor, or Congress, or high-profile local positions (big city mayor, county executive). There would certainly be more realistic opportunities to proceed up the political ladder for aspiring local politicians in both major parties. The number of elections for statewide posts without an incumbent running would double. As important, these opportunities would be certain to arise at predictable times, making planned efforts feasible. And there would be a ripple effect through the state’s political system, increasing competition, accountability, and, perhaps, participation.

Policy Impact: Hard Choices Easier? After reviewing the “sparse” literature on the subject, Casey Burgat of the School of Public Management at George Washington University reported that statewide leaders are more likely to act on their own views, and are less responsive to voter priorities, when they are term limited.

Leonardo Bracini’s and Abel Broduer’s findings from their work on governors’ administrative responses to the covid pandemic are reinforcing of this general conclusion. When the effects of ideology were removed, the executive’s political party and existence of term limits were the only factors of those studied that affected his or her decision to implement stay-at-home orders, and to do so more speedily. Bracini and Broduer summarize: “When governors do not face reelection, they are less concerned about their reputations and, in turn, this has significant effect on their economic policy choices;…[t]he same seems to apply to policies concerning health and safety.”

Term Limits: On Balance a Good Idea. Current candidates for governor are over-claiming the impact. A two-term limit for statewide elected offices is not likely to increase public confidence in state government nor dramatically diminish corruption. But in a state with a modern tradition of governors and other statewide elected serving three or more terms such a limit would reduce the extended dominance of state politics and government by the governor and a few others. Elected leaders would be less risk-averse in decision-making. Governors would be less formally powerful, and for at least a portion of their time in office, less able to work their will. Increased political opportunity will likely result.

On balance, a two-term limit for statewide elected offices is a good idea.