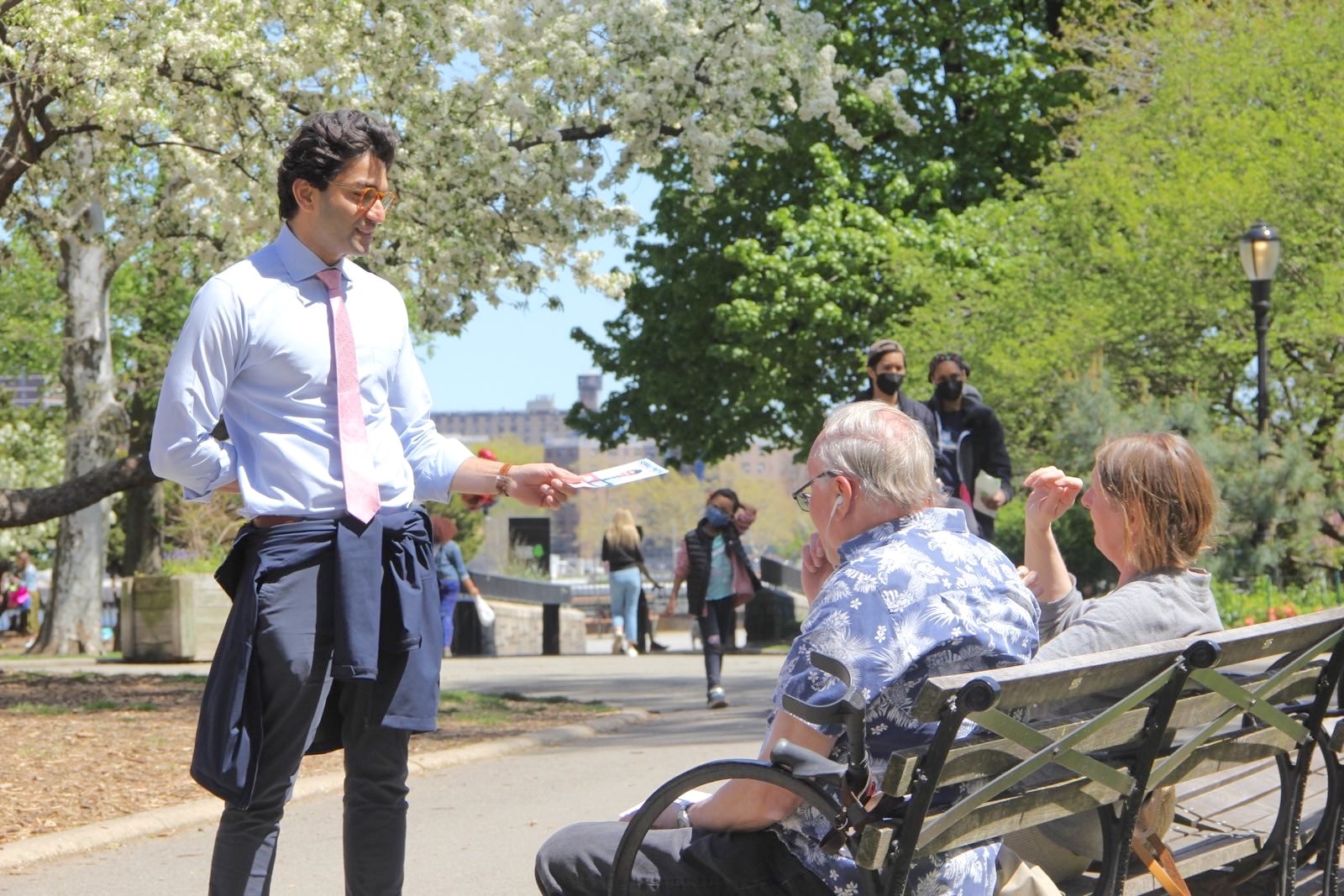 Suraj Patel, the author, on the campaign trail (photo via Patel campaign)

Today, it’s hard not to be frustrated. The cost of everything – from rent to gas to groceries to clothes to even toys - is going up. At the same time inflation also has another nefarious side effect: wages - which were already stagnant - essentially went down as inflation went up. This is an inflationary pay cut and it means workers are being squeezed from both sides. Rather than putting our heads in the sand, or pointing to alternative data points to try and deflect people's pain, it’s time for real solutions.

I am running for Congress in New York’s 12th Congressional District and I have a plan to get costs under control; I call it “The Abundant Society.”

To start, we need to understand just why costs are going up. Unprecedented supply-demand imbalances driven by the pandemic and exacerbated by the war in Ukraine and covid zero policies in China have led to a spike in inflation not seen since the 1980s. This episode of inflation is layered on top of decades of escalating costs for essential parts of life such as housing, healthcare, education, and childcare.

At the same time, even though the economy is recovering, it’s still leaving lots of pain in its wake. This is not academic for me, I spent the last year dealing with covid-related foreclosures on our family business while making sure workers still had healthcare and benefits. So just because we are “recovering” does not mean we emerge without deep wounds.

The United States has made an unprecedented labor market recovery coming out of covid but now we must turn our attention to expanding the long-run productive capacity of our economy – by making our supply chains more robust, building better and cheaper infrastructure, and lowering the ever-rising costs of childcare, healthcare, higher education, and housing.

However, for too long, the reflexive response of politicians has been “No” and it’s caused a crisis of scarcity and staleness. We need new leaders who are ready to step up with bold, new, fresh ideas to help us not just recover but be the city we truly aspire to be. The Abundant Society plan has a single goal: to make New York and the country a better place to live for everyone, and that starts with getting the cost of living under control and making it easier to live, raise a family, and start a business.

The Jones Act has strangled Puerto Rico, especially during natural disasters, and makes it cheaper for Hawaii to import oil and gas from Russia than from domestic sources. Just a few weeks ago, a container ship was stuck in the Chesapeake Bay for over a month, something that could have been resolved in much less time if it weren’t for the Foreign Dredge Act. These antiquated laws have failed to produce a sizable domestic maritime fleet or a dredging fleet capable of meeting the demands of the 21st-century economy.

President Biden must also suspend all non-Russia-related tariffs. A recent report from Hufbauer, Hogan, and Wang at the Peterson Institute for International Economics found that suspending tariffs would result in a one-time reduction of 1.3 percentage points on the consumer price index, a commonly cited indicator of inflation. Doing this would nearly halve the gap between inflation and wages.

The COMPETES Act, which provides money for domestic manufacturing of semiconductors, equips the Commerce Department with an assistant secretary to oversee supply chains, and more, is still stuck in congressional conference. This bill, which has been in the works since 2020, should’ve been sent to President Biden’s desk within the first 100 days of his presidency.

While Congress passed a historic bipartisan infrastructure bill — a long-overdue necessity to increase our economic productivity and capacity — construction costs are so high that this investment won’t go nearly as far. Congress must get to work on a bill to drive down infrastructure costs so we can truly ramp up our capacity and build quicker, better, and more infrastructure.

Long before this current episode of inflation, the costs of childcare, healthcare, housing, and higher education have been prohibitively expensive for decades, squeezing the pockets of American families. We must bring these costs down so the pillars of middle-class life are far more attainable and affordable for more families. Self-imposed supply constraints and decades of stagnation have resulted in a crisis of scarcity, a high cost of living, and staleness that has broken the promise that led my parents to immigrate to this great nation: education, opportunity, and social mobility.

We can reverse this by enacting smart policies that tear down obstacles in these sectors and build up supply. When it comes to the modern essentials of American life, we must become a society of abundance.

We can do this by eliminating supply constraints of our own making by getting rid of burdensome red tape, reinvigorating robust antitrust enforcement, and simply building more. More public colleges and universities, more housing, more hospitals and healthcare providers, and establish a federal grant program for school districts to create a public option for childcare similar to France’s crèches.

Locally here in New York, the political culture of 'No' has led to a livability crisis. No to a blood center, no to upzoning high opportunity neighborhoods in the city, no to capping the FDR Drive, no to a living shoreline to save the East River waterfront. We need new leaders who are ready to say 'Yes.'

We have the power and the tools to help people right now, and the Abundant Society will help make it happen. We don’t have a second to lose, too many are struggling.