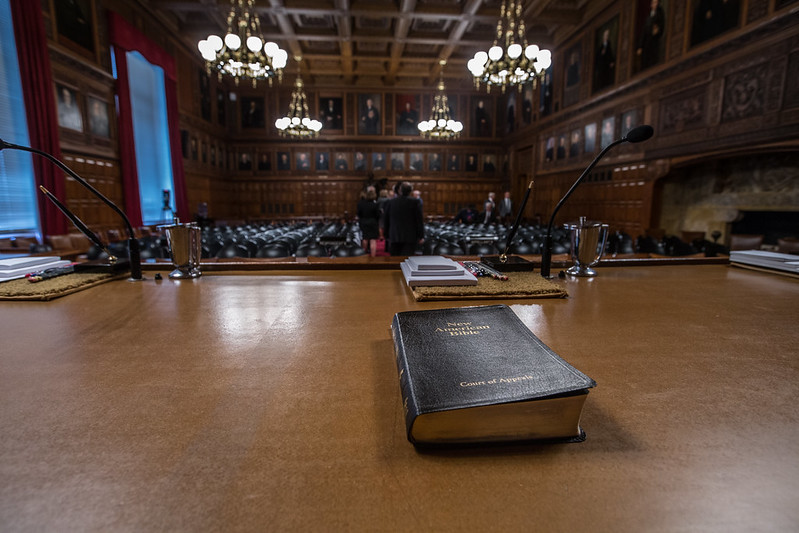 As early as primary school, we are taught about the United States Constitution’s system of checks and balances, and that the judicial branch was created to temper the actions of the executive and legislative branches of government. We learn about the importance of an independent judiciary, but beyond that, the vast majority of us don't think about the role and function of judges unless we find ourselves involved in a court case. We need to be more keenly aware, nationally and at home, of the tremendous power the judiciary and judicial selection have in most facets of our everyday lives.

With the leak of the draft majority decision in Dobbs v. Jackson Women's Health Organization written by Justice Samuel Alito, the Supreme Court is suddenly under intense public scrutiny. Dobbs is only the latest development that highlights the immense repercussions of a partisan Supreme Court, and the dire consequences of elections. In Alito’s view, the right to an abortion is not “deeply rooted” in our nation’s history. He writes for the majority that, “Until the latter part of the 20th century, such a right was entirely unknown in American law.”

Perhaps that’s true, but it’s disingenuous and reverses the women’s rights revolution that began in the mid-nineteenth century with the fight for the right to vote. Fifty-three years after the constitutional amendment granting women the right to vote, in Roe, the Supreme Court recognized women’s bodily autonomy — a relatively compact timeline for the enshrinement in law of the rights of a marginalized population. It also proves how potent “deeply rooted” constitutional liberties are when applied to all. The draft majority in Dobbs discards the court’s procedural norms by flouting abortion jurisprudence and the principles of stare decisis. Roe is settled law for 50 years — an independent, non-partisan judiciary would heed precedent. The leaked decision is a wholesale (not even incremental) rejection of precedent.

Here in our home state of New York, the judiciary’s recent decision that this year’s primary elections would be bifurcated and held on two separate dates due to challenges to the redistricting process is also being treated with skepticism.

Primaries for Congressional and New York State Senate offices will be held in August and primaries for all judicial and other offices will be held in June. There is some irony in the fact that despite this irregular electoral schedule being brought about by the judiciary, highly impactful judicial races were by and large left out of the primary date discussions and legal battles, which focused primarily on races for Governor, Congress, State Senate, and State Assembly. The primary bifurcation raises serious questions about what impact the Court’s decision will have on voter turnout, which is already often below 20% during primaries.

Putting aside whether the judges were correct in bifurcating the New York primary, the public’s immediate mistrust of the process has larger implications. For example, the fact that the public generally doesn't understand the process by which people become judges does not engender deference and trust in the judiciary. Recently, while petitioning over five weeks for signatures to get on the June Democratic primary ballot for Surrogate's Court judge, many people skeptically asked me why there’s rarely a choice in judicial candidates when they vote.

Part of the problem is that judicial candidates get on the ballot through a process that is little known and poorly understood by most people, even voters who are otherwise quite well-informed.

Judicial candidates for Surrogate's Court like myself need signatures (4,000) from registered Democrats to appear on the primary ballot. Surrogate’s Court, also known as probate court, oversees wills and estates, as well as the appointment of fiduciaries, guardianships, and adoptions. Judicial candidates for Civil Court positions also need signatures (1,500) to appear on the primary ballot.

For Supreme Court judges, the Constitution of the State of New York created an alternate method to the petitioning process. In place of a primary election, "judicial delegates" (an elected position), vote at a judicial nominating convention for the Democratic Party candidates who will appear on the general election ballot.

Both the Democratic primary winners and the “nominated” Supreme Court candidates generally aren’t challenged by other party candidates in the general election and that’s why there’s rarely more than one “choice” on the printed ballot.

Voters need more information about how people become judges and about the candidates themselves. Exacerbating the perceived lack of choice and imposed apathy, even during a contested primary, voters don’t know where to find information about judicial candidates. The New York State Bar Association and The New York State Board of Elections should collaborate on means and methods of disseminating information to the general public about judicial candidates well in advance of elections.

As things stand now, the impression some have about how people become judges in New York is that it's largely dependent on who you know and how much money you have to finance your candidacy. That's not good enough. We need a judiciary that represents our entire expansive mosaic.

Now more than ever, we must guard against the appearance of backroom deals and patronage in the judiciary and promote impartiality. Lawyers, judges, legal, civic, and community groups all have a role to play in demystifying the judicial electoral and appointment processes and in advocating for the necessary reforms to restore people’s faith in the judiciary‘s independence and, by extension, the rule of law.

As Roe illustrates, voter participation lies at the very heart of constitutional progress and the full realization of our deeply rooted rights.

***
Elba Rose Galvan is a Surrogate's Court Referee in King's County and candidate for Manhattan Surrogate. She served under Surrogate Margarita Lopes Torrez, and currently serves under Surrogate Rosemarie Montalbano, both considered reformers of the court.