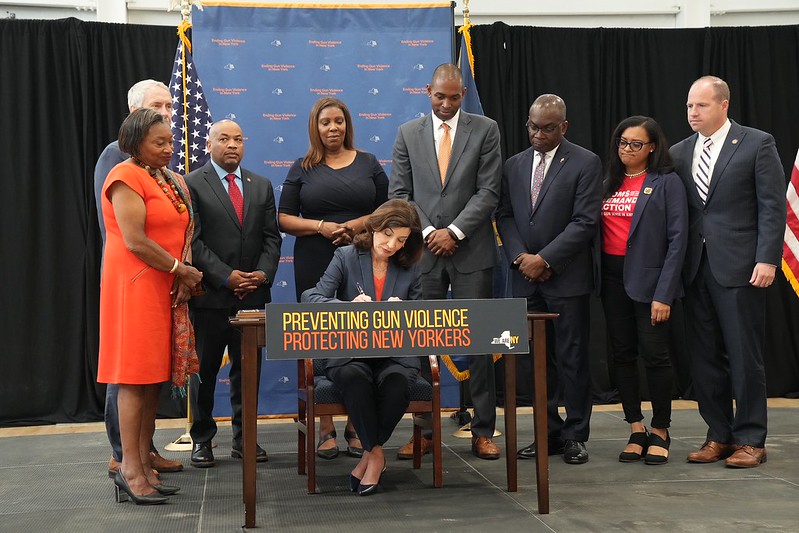 1911: Rising public concern with gun violence
It is helpful to recall why the Sullivan Law was passed in the first place.

That 1911 law provided that: ”Any person over the age of sixteen years, who shall have in his possession in any city, village or town of this state, any pistol, revolver, or other firearm of a size which may be concealed upon the person, without a written license therefor, issued by a police magistrate or any such city or village, or by a justice of the peace of such town, or in such manner as shall be prescribed by ordinance in such city, village or town, shall be guilty of a misdemeanor” (NY Laws of 1911, Ch.. 195).

Rising public concern with gun violence in the early 20th century led to the law. In August 1910, New York City Mayor William J. Gaynor, waiting to board a passenger ship in Hoboken, NJ, was shot by an aggrieved New York City dock worker who had been fired from his job. Gaynor was grievously wounded but survived.

In January 1911, famous novelist David Graham Phillips was shot dead near Gramercy Park by a deranged man who believed Phillips used one of the man’s family members as a character in one of his novels. The shooter then killed himself.

The Gaynor and Phillips shootings sparked public outrage. But it was a rising tide of shootings using concealed weapons in New York City streets that led to legislative action.

Senator Sullivan explained that “gun toters” fell into three categories. The first was professional criminals. The second was deranged people. His proposed law would help in those areas.

But he was most concerned with a third category, “young fellows who carry guns around in their pockets all the time not because they are murderers or criminals but because the other fellows do it and they want to be able to protect themselves. [T]hose boys aren’t all bad but…just carrying their guns around makes them itch to use them.”

Opponents of the bill objected that law-abiding citizens needed firearms to defend themselves and their homes. You cannot force a criminal to get a license to use a gun, others asserted. Guns would flow into New York from other states with lax gun restrictions, rendering it hard to enforce.

Other critics said the law could be used disproportionately against newly-arrived immigrants and other minority groups. Still other skeptics warned that the law might enable unscrupulous police officers to frame suspects by planting guns on them at the time of arrest.

But press and public opinion strongly favored the measure. The city coroner’s office issued  reports highlighting deaths from handguns. “A rigid law making it difficult to buy revolvers would be the means of saving hundreds of lives,” said the office’s  January 1911 report. New York County District Attorney Charles Whitman told reporters that “carrying a weapon is an invitation to a crime. Reduce the weapons carried and you reduce the crimes of violence.” Civic and commercial groups endorsed Sullivan’s proposal.

Democrats held a majority in the State Legislature. Sullivan was a Democrat and the New York City Tammany Hall Democratic Party organization backed his proposal. But legislators from both parties, sensing the public demand for action, jumped on board. The bill garnered 46 of 51 votes in the Senate and 148 out of 150 in the Assembly. Democratic governor John A. Dix quickly signed it into law. It took effect on August 31, 1911.

New York amended the law in 1913 to clarify the licensing standard: magistrates could “issue to [a] person a license to have and carry concealed a pistol or revolver without regard to employment or place of possessing such weapon” only if that person proved “good moral character” and “proper cause” (NY Laws of 1913, Ch. 608).

The procedures have been revised since then but, as the Supreme Court’s opinion in Rifle and Pistol Association v. Bruen notes, “today’s licensing scheme largely tracks that of the early 1900s.”

After More Than a Century, the Law Falls
The Sullivan Law has been challenged in state and federal courts several times but, until now, has been deemed constitutional.

In the new Supreme Court decision overturning the law, Justice Clarence Thomas notes that “No New York State statute defines ‘proper cause.’” He offers a lengthy discussion of historical precedents and previous court decisions. He notes that “at the end of this long journey through the Anglo-American history of public carry, we conclude that respondents have not met their burden to identify an American tradition justifying the State’s proper-cause requirement. The Second Amendment guaranteed to ‘all Americans’ the right to bear commonly used arms in public subject to certain reasonable, well-defined restrictions.”

The opinion concludes that “New York’s proper-cause requirement violates the Fourteenth Amendment in that it prevents law-abiding citizens with ordinary self-defense needs from exercising their right to keep and bear arms.”

This is a 6-3 decision, with the dissenters citing their own view of historical precedent and statistics about people killed by handguns every year.

The decision is a reminder that courts play a powerful role in our society. “We are under a constitution but the constitution is what the judges say it is,” Charles Evans Hughes, Chief Justice 1930-1941 remarked early in his career. That may be an overstatement but it indicates the courts’ strong authority.

What happens next?
The Supreme Court decision reversed a state Court of Appeals opinion that had supported the law. The decision ends with these words: “We therefore reverse the judgment of the Court of Appeals and remand the case for further proceedings consistent with this opinion.”

It is not certain what that Court will do; “…further proceedings consistent with this opinion” seems like a fairly broad concept.

But attention has already shifted to the Legislature and Governor Kathy Hochul. Ironically, the decision comes shortly after the Legislature enacted other gun control measures. Now, as in 1911, the Legislature is led by New York City Democrats (and a Senate majority leader from the suburbs) and the governor hails from upstate (John Dix was from Glens Falls, Kathy Hochul is from Buffalo).

As Justice Stephen Breyer noted in his dissent in the new Supreme Court decision:

What kinds of firearm regulations should a State adopt? Different States might choose to answer that question differently. They may face different challenges because of their different geographic and demographic compositions. A State like New York, which must account for the roughly 8.5 million people living in the 303 square miles of New York City, might choose to adopt different (and stricter) firearms regulations than States like Montana or Wyoming, which do not contain any city remotely comparable in terms of population or density….For a variety of reasons, States may also be willing to tolerate different degrees of risk and therefore choose to balance the competing benefits and dangers of firearms differently.

Governor Hochul has already announced a special session of the Legislature for this week to deal with the issue. History may in a sense repeat itself as New York, 111 years after its first concealed carry law, again takes the lead in searching for a solution that addresses public safety concerns and also recognizes and abides by constitutional protections and guarantees as outlined by the court.

***
Bruce W. Dearstyne is a historian in Albany, NY. SUNY Press recently published the second edition of his book  The Spirit of New York: Defining Events in the Empire State's History  and his new book The Crucible of Public Policy: New York Courts in the Progressive Era.