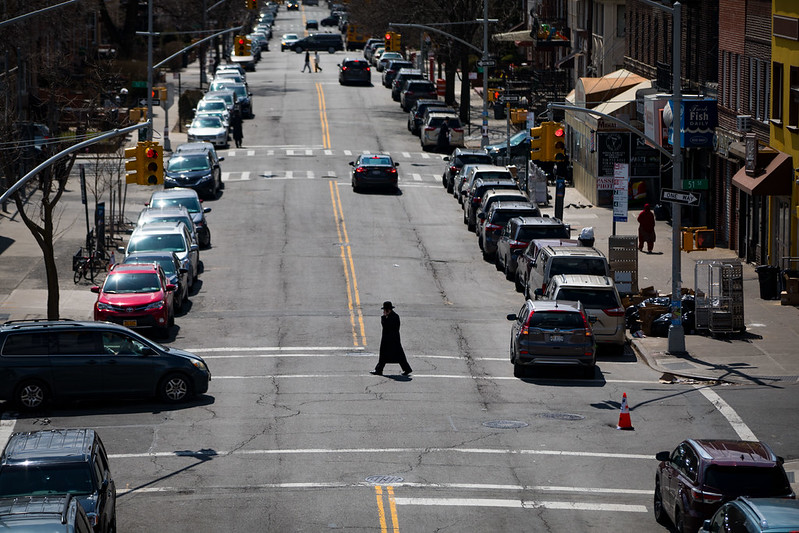 It's summer in New York City, and the word on the street is heat – literally. Some of the hottest places are the pavement itself, including the city’s 6,300 miles of streets and highways. To more effectively address urban heat islands, New York City would benefit from a cohesive, science-based approach that studies how to best integrate existing and emerging technologies for cooling these surfaces.

Two recently proposed laws by the City Council would require cool pavement pilots by the Department of Transportation and Department of Parks/Department of Environmental Protection. Such studies would serve as an important piece of the puzzle, helping to address many key questions about the viability of urban heat island mitigation approaches in New York City. This includes issues not only directly related to heat reduction, but also matters of safety, durability, longevity and maintenance. 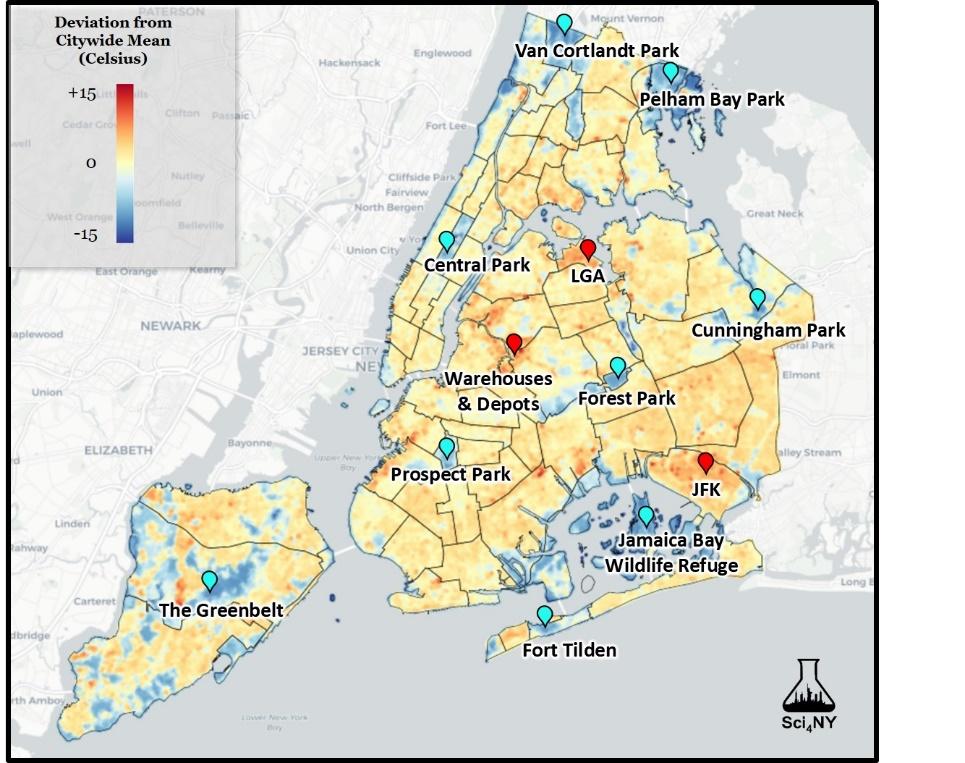 Our recent analysis using Landsat 8 satellite data from the past five summers (2017-2021) highlights the importance of including pavement in New York City’s extreme heat equation. The image above shows how much the temperature deviates at a given location compared to the citywide average.

Some of the hottest areas easily visible by eye on the map are largely covered in pavement, including JFK and LaGuardia Airports. While it’s challenging to see the individual streets and sidewalks here, we know they are made of the same types of materials that amplify the urban heat island. Environmental justice areas are disproportionately affected by heat due to their relatively high ratios of paved areas to greenspaces. As a result, they are particularly relevant to consider in this context.

In terms of absolute temperature, paved areas can reach 120 - 150 ⁰F. This is due to the fact that many of these surfaces are composed of asphalt, which is very effective at both absorbing (due to its dark color) and retaining heat. While less often discussed, heat retention by pavement can also adversely affect human health at night by reducing people’s ability to recover during heat waves.

The coolest areas easily visible on the map are largely greenspaces, where tree cover and lack of pavement work in tandem throughout the day to limit heat absorption and retention. While we should expand greenspace and green roofs as much as possible, we should think of these options as parts of a system. Additional heat-reduction benefits can be achieved if thoughtfully coupled with attempts to cool our pavement. Furthermore, in areas where we can’t realistically expand our greenspace, addressing street heat takes on increased importance.

One option for consideration is to reduce the solar reflectance of pavement, commonly referred to as cool pavement. These applied coatings reflect up to 30-50% of incoming solar energy, compared to 5-20% for untreated asphalt depending on its age. In a one-year pilot in Phoenix, Arizona in 2020, streets treated with cool pavement showed average surface temperatures 10.5-12.0⁰F lower than standard asphalt during peak afternoon hours. Temperatures below the surface also averaged 4.8⁰F lower on the cool pavement. When planned carefully, such reductions in temperature not only limit urban heat islands directly, but can also reduce cooling needs of nearby buildings.

Los Angeles has undertaken its own ambitious efforts to reduce urban heat under the Cool LA program. By 2028, it plans to cover 250 lane-miles of city roads. One challenge they’ve encountered is that reflective pavement coatings can raise localized air temperatures, increasing the heat experienced by people using these surfaces. As a result, these coatings have been used more frequently to date on roofs or parking lots. For locally affected buildings, which may absorb heat from treated pavement, reflective coatings on their exteriors can minimize these effects.

These issues do not mean that cool pavement technology is unworkable in cities like New York. Rather, they indicate that it needs to be done thoughtfully, taking into account human health and equity concerns, as well as optimizing interactions with the local built infrastructure. In fact, LA is pressing ahead with its program due to the core need to address urban heat as temperatures rise, working with researchers to address these challenges. New York City can and should do the same evaluations, starting with the recently proposed cool pavement pilots.

While increasing the reflectance of pavement gets the most attention, there are a handful of newer, related cool pavement technology options that may be useful for New York City to consider as well. There are also lots of other cool ideas currently available or in the works, including using the energy from pavements to heat buildings. Others focus on engineering a host of “super-cool” materials to increase the ability of structures to reflect and/or emit heat.

Finding the best ways to evaluate and apply all of this information will take expertise. Fortunately, a program already exists in New York City. Town + Gown (T +G) – a citywide research program within the Department of Design and Construction (DDC) – works to draw from knowledge in New York City’s academic institutions and practitioner city agencies to address challenges in the built environment.

Such efforts can help evaluate how and where cool pavement might be successfully integrated into New York City’s street designs, carefully weighing the multiple uses and maintenance considerations this important infrastructure system must meet. For example, there is already work underway in New York City on permeable/porous pavements, which can help address stormwater management issues and also reduce the urban heat island.

In the conversation about urban heat, the trees overshadow the conversation. While they’re a key part of the equation, we need to branch out and give the streets more attention. With a bit of careful planning and scientific input, we may be able to make New York City an even cooler place.

***
Yosif Zaki is a graduate student with expertise in data analytics at the Mt. Sinai School of Medicine. He is also a volunteer for Science for New York (Sci4NY), an effort to have policymakers and scientists in NYC work together to address key challenges facing the City. Nancy Holt, PhD, leads Sci4NY. She holds a PhD in Physical Chemistry and formerly worked on climate change issues at the U.S. Department of State. On Twitter @Sci4NY.