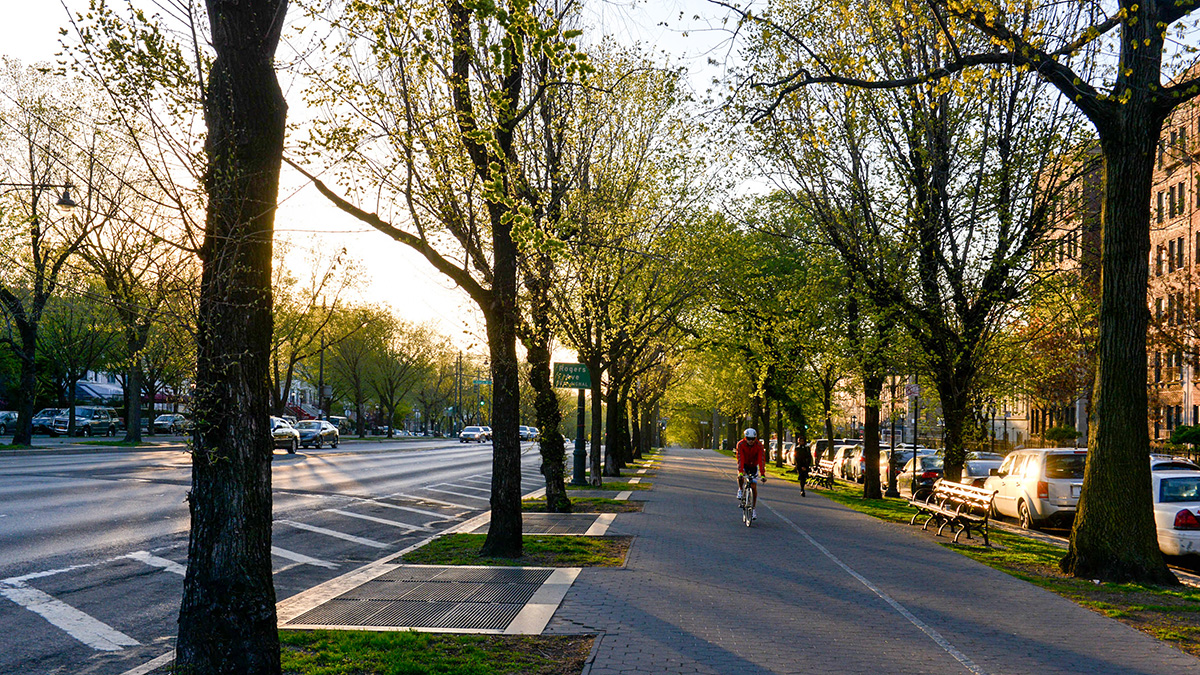 It’s another record-breaking hot summer in New York, and we can all agree that the climate crisis is already here. Sweltering days, terrifying flash floods, and increasingly poor air quality are putting all New Yorkers at risk, especially those living in historically underinvested communities. With no more time to waste, we can — and must — make major moves in the climate fight with our city’s streets.

Imagine what it would feel like to walk down a street in your neighborhood that’s climate resilient: shade from abundant trees protects you from the hot sun; colorful rain gardens attract bees and birds while also collecting stormwater; neighbors sit peacefully at a misting station in a plaza at the end of the block; water features connected to fire hydrants create a safe and cool game for kids nearby; and raised medians with lush plantings protect bikers from limited car traffic thanks to carefully designed streets.

This city is possible. So, how do we get there?

With over a quarter of New York City’s land area covered by streets, these dark, impervious surfaces can be the ticket to reducing emissions and creating new public spaces that fight climate change. Furthermore, climate investments on our streets are known to boost local economies and drive the recovery the city has set out for itself. With our streets completely government-controlled, we can act immediately to protect every neighborhood from the climate crisis.

If the administration of Mayor Eric Adams and the City Council want to leave a legacy in the climate action fight, they need to invest big in a swift overhaul of our streets. Here’s how we can accelerate the process:

1. Cut emissions to combat the public health emergency.
To reduce the number of cars and trucks on our streets, we should pilot low-emissions zones in every borough. We can look to cities around the world — like Medellin, London, Paris, and Madrid — that have restricted carbon-emitting vehicles at certain times of the day. In New York, let’s enact these in neighborhoods suffering from the worst air quality conditions and highest heat vulnerability, especially in the outer boroughs, and treat climate change like the public health emergency it is.

2. Set bold, citywide climate goals for every street project and stick to them.
The city should mandate that all new street projects are approached to counter the climate crisis. Every new street project in your neighborhood can be integrating resilient materials like cool and permeable pavements during routine streetscape upgrades, creating green roofs on bus shelters and other structures, and expanding street trees through a next Million Trees program.

An interagency Street Climate Action Task Force could set the vision for an evaluation framework to review every project within the public Right of Way to ensure it supports and prioritizes adaptation and decarbonization goals. There’s no reason every new Vision Zero project can’t also serve as a way to fight climate change.

3. Empower New Yorkers to support the climate fight from the grassroots.
To shape equitable and community-led transformation, the city should replicate and expand the DOT’s Street Ambassador program to account for barriers to participation like language or childcare. The city can honor community knowledge by providing neighborhoods with the technical expertise to design and steward public spaces that combat the climate crisis. Let's learn from successful community-led projects like the Clean Air Green Corridor on 182nd Street. Provide pathways to envision what’s possible, and not just opportunities to strike down new plans.

4. Invest, invest, invest.
Lastly, ideas without funding support won’t get us very far. New York City government can learn from cities like Montreal that are climate-testing their budget so that every tax dollar spent is contributing to the fight against climate change.

We should reprioritize the city budget and explore dedicated funding strategies through congestion pricing, toll roads, city-run parking garages, paid parking, and curb space fees to deeply invest in more accessible, climate-resilient, and livable public spaces. We can get creative by mobilizing federal investment, like the Healthy Streets program from the Infrastructure Investment and Jobs Act or accessing Community Development Block Grants to fund climate projects on our streets.

A decade ago, we decided we could redesign our streets to protect us from cars. Let's use this decade to protect New Yorkers from climate change too.

***
Guillermo Gomez is program director and Martha Snow is associate program director at the Urban Design Forum, a nonprofit organization dedicated to mobilizing civic leaders to confront the defining issues in the built environment. They led the Streets Ahead initiative, a platform to imagine more vibrant, equitable streetscapes in New York City. On Twitter @UDFNYC.