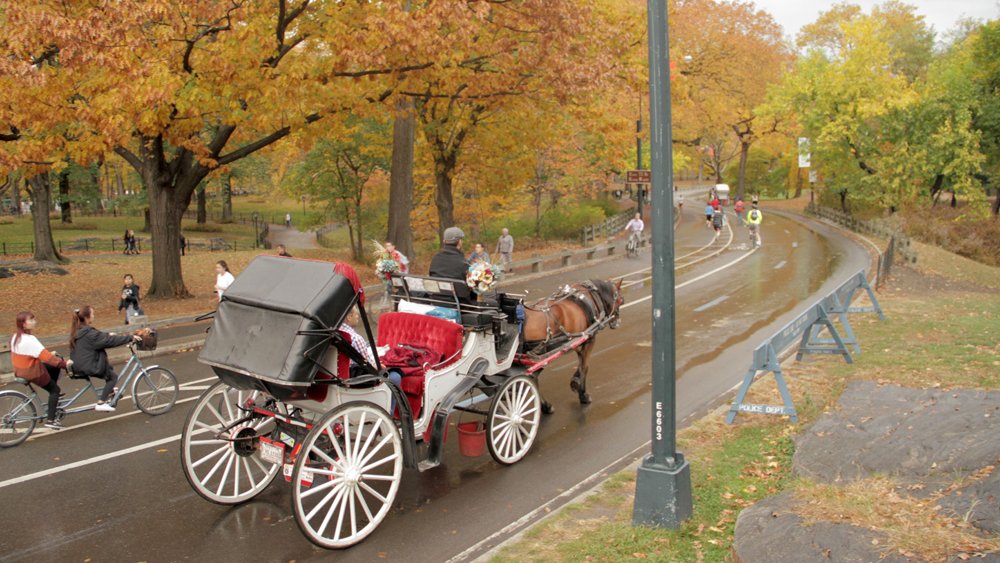 On the afternoon of Wednesday, August 10, a carriage horse named Ryder collapsed at 9th Avenue and 45th Street in the heavy traffic going to the Lincoln Tunnel. Images of this painfully thin horse struggling to get up, still tied to his carriage as his driver whipped him to comply, were picked up by the media and attracted a large, horrified crowd. Down for about an hour, Ryder finally managed to get up after being hosed down by the NYPD.

This appalling incident has reignited calls for banning the horse-carriage industry.

Will this finally be the proverbial straw?

Horse-drawn carriages are widely considered to be inherently inhumane and unsafe for both horses and people. Accidents involving urban carriage horses have been a public safety concern for decades, resulting in serious injuries and death to both people and horses. New York City is no exception. But working and living conditions are also quite bad.

For the owners, the drivers union, and their supporters to blindly assert that the stables are “state-of-the-art” does not make them so. The horse stalls are allowed by New York City law to be only 60 sq. ft., which is much too small. Standardbreds need 144 sq. ft, and larger draft horses 196 sq. ft.  Horses receive no regular turn-out to pasture. A five-week requirement for time off is no substitute for essential daily pasture time.

The horses are allowed to work for nine hours each day, seven days a week, between the shafts of their carriages. And they continue to work in punishing hot weather. Even when carriage rides are suspended (mostly) during very hot weather, there is little relief for the horses who remain in their cramped stalls with at most a fan to help them cool.

There is no excusing these inhumanities.

It is time for the City of New York to grow a spine and make some real changes. Carriage horse accidents will continue to plague any mayor and cast the city in a bad light.

Abrasive confrontations go nowhere. It would be wise for the carriage horse owners to stop digging in their heels and at least come to the table for a discussion about electric carriages. In the last few years, two major cities that had carriage horses — Montreal and Chicago — did not offer an alternative to the drivers and simply shut their businesses down.

In late July, City Council Member Robert Holden introduced a bill to ban horse-drawn carriages and replace them with electric carriages. There is no evidence that he tried to work with the carriage owners or the union, a mistake that may well result in the bill’s failure. The bill offers no plan for what will happen to the horses other than to have the owners sign a commitment not to send horses to slaughter, showing a lack of understanding of how this despicable process works. And the electric carriage portion is mostly lacking.

In 2006, I worked with then-Council Member Tony Avella to introduce the first ever bill to ban horse-drawn carriages, then a state bill in 2011 when Avella went to the State Senate. Nothing came of these bills, but I was quickly learning an important lesson: an effective solution can only come about with all players willing to negotiate.

To that end, I put my organization on hold and joined forces with Susan Wagner, president of Equine Advocates, a horse sanctuary and advocacy organization. We undertook a trip to Guadalajara, Mexico in 2019 to see their successful electric carriages, and afterwards formed the Committee for Compassionate & Responsible Tourism.

It was an invaluable experience to learn from the people in Guadalajara – activists, drivers, owners, government officials, engineers, and tourists – who came together to solve the problem. Typically, animal activists and carriage horse drivers do not have good relationships. This was also true of Guadalajara. But things changed there because of collaboration and commitments to make something good happen. There was mutual respect – something that is very clear in the video on our website in interviews of these participants. We saw their success in action and wanted to bring the same thing to New York City.

The drivers in Guadalajara love the electric carriages. They make more money and don’t have to worry about costly vet care for their horses or losing business in bad weather. And they no longer need to worry about being called animal abusers in front of their families.

Perhaps the New York City drivers will never agree to give up their horse carriages. But the handwriting is on the wall. Besides Guadalajara, Several cities around the world have shifted to electric horseless carriages, including Berlin, Cologne, Dubai, Istanbul, Merida, Motul, Munster, Mumbai, and Santo Domingo. Atlanta is considering them. Maybe even Charleston.

Horse-drawn carriages are not a big tourist draw. Frommers.com, a noted tourist guide, describes a carriage-horse ride as one of the most overrated experiences to avoid in New York City. "Pity those poor beasts of burden," it states. "They get dragged out in the heat and cold with buggy attached..." just for tourists.

To acknowledge the issue of animal exploitation and the need to make changes is called compassionate and responsible tourism.

It is an awareness that is spreading around the world – one that touches on ethics and eco-tourism and a growing concern about the inhumane treatment of animals. We see it in Barcelona where bullfighting – a long tradition – has been shut down; in several cities in California where rodeos have been banned; and in countries that have banned wild animals in circuses. And many cities around the world have replaced horse-drawn carriages with horseless electric carriages for humane reasons.

Almost 200,000 people from all over the United States, Canada, South America, Europe, and Asia had previously signed our petition to end New York City’s carriage horse industry. It’s clear that introducing electric carriages in New York City can be a shot in the arm for tourism.

Pedro Aguilar, President of the Tourist Carriage Association in Guadalajara said it best in our video: “Cities evolve, cities change. And the people, as part of the city they live in, have to also change and adapt. Traditions don’t die. They live on because it’s not just the horse. The tradition is going on the ride, the tour we give, how we treat people, and getting in a vehicle like this, which is simply a carriage without a horse.”