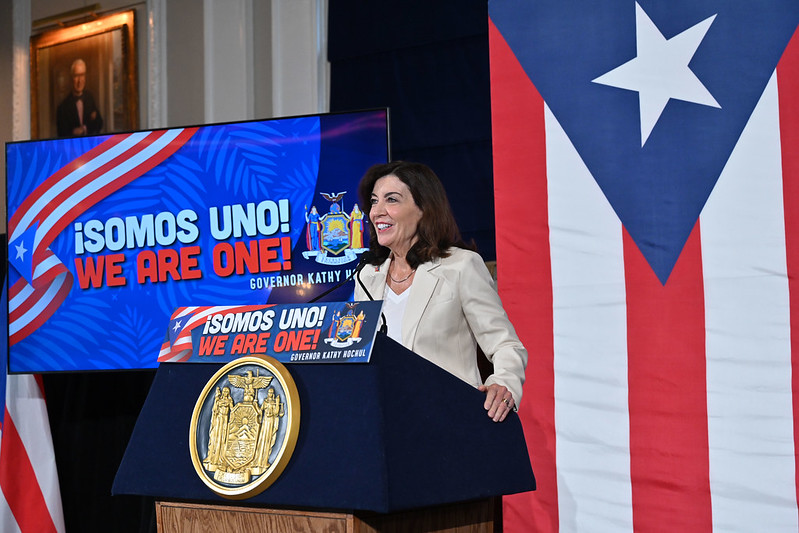 Every election season, Latinos have the same conversations about how political candidates engage with us. My constituents and I are used to seeing chronic underinvestment despite big promises, and our communities are used to feeling like an afterthought. It’s far too easy for us to succumb to cynicism about our political leaders’ commitment to fighting for us.

But that’s not the case with Governor Kathy Hochul. And she’s proven it time and time again on the campaign trail and through her legislative and budgetary victories for our community.

With Election Day around the corner, Kathy Hochul is fully engaged with the Latino community. Her campaign has prioritized Latino investment with a seven-figure Spanish ad buy that reaches members of our communities across the state, on the airwaves, and through digital ads.

She’s also working hand-in-hand with Latino elected officials to speak to constituents across the five boroughs, which I saw firsthand when I joined her campaign to reach voters in Washington Heights. The impact of in-person voter engagement is truly immeasurable, and her team is putting in the crucial face-time that our voters need.

In May, the governor and the State Democratic Party launched the “Nueva York Initiative,” a first-of-its-kind bilingual empowerment program dedicated to coalition building, voter registration, and mobilization in the Latino community in 2022 and beyond.

The actions Governor Hochul has taken show that she views Latino voters as more than a mere item on her campaign’s checklist. She understands the importance of sharing her message with non-English speakers so that we can all show up to the polls informed about what the Governor is fighting for, from keeping guns off our streets to creating jobs and bringing down the cost of living.

Although Governor Hochul has only had a relatively short time in office, her accomplishments for the Latino community have gone far.

Communities of color are often hit the hardest by gun violence, and polling shows crime as a key issue among Latinos. Governor Hochul has stepped up to protect our neighborhoods by passing common-sense gun safety laws that keep weapons out of the wrong hands and providing law enforcement officials with the tools to crack down on the distribution and possession of illegal weapons. Governor Hochul knows that New Yorkers deserve to move through their days free of fear and has taken decisive action to keep us safe.

The governor has also made historic advancements in New York’s economic recovery by accelerating $1.2 billion in middle-class tax cuts for 6 million New Yorkers and providing $100 million in relief for nearly 200,000 small businesses, working to ensure an equitable pandemic recovery for all.

In the wake of Hurricane Ida, Governor Hochul made $27 million in storm relief available to New Yorkers, including those in my community, to support individuals who were ineligible for federal aid. When Queens residents’ basements flooded during the storm, Kathy Hochul was the first to pick up the phone and lend a hand in their hour of need.

Governor Hochul has proven that fighting for Latino communities makes our state a stronger, more prosperous place. She is a true ally to our communities, and she’s shown it by listening and executing on the issues that matter to us most in Albany and in our streets. Governor Hochul is the real deal.