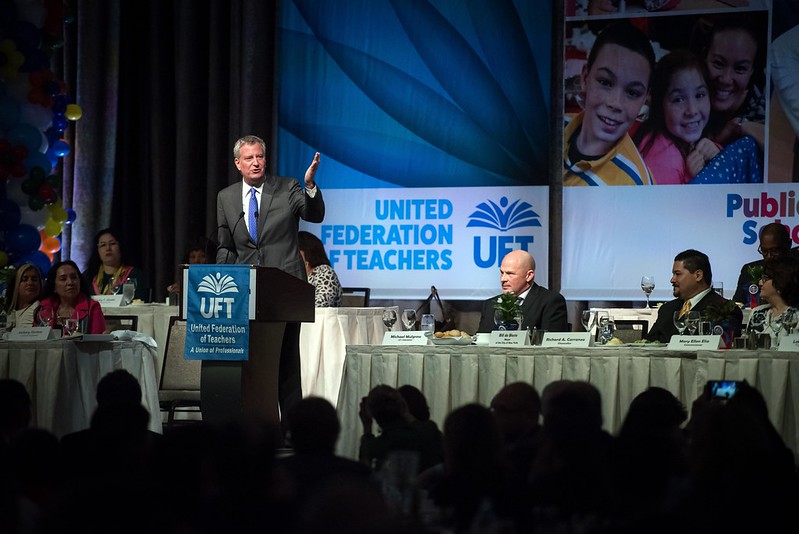 A long-time UFT chapter leader I know used to joke, “There are two things wrong with our union—the leadership and the membership.” I’ve been very involved with the teachers union, both in opposition and alongside leadership, and I couldn’t agree more. That two-pronged problem with our union is evident in the saga over major changes to health care for retired and current teachers.

Let’s look first at membership. In 2018, 86% of us voted yes on a contract. I was on the UFT Contract Committee and fully supported it. It wasn't a great contract, but it appeared to be a fair one. Depending on who you asked, it was above or close to cost of living, and there were no horrendous givebacks. At least that’s what we were told.

The contract was very quickly presented to the UFT Executive Board and Delegate Assembly. I voted yes in both bodies. It then went to membership where, as everyone expected, it was voted up by an overwhelming majority. Everything seemed fine.

Now, in 2022, we’re looking at a rollback of benefits for retirees. This, evidently, is because of a side agreement leadership made with the city in our 2018 contract. The UFT promised health care savings in Appendix B of our Collective Bargaining Agreement. However, this agreement was not presented to the Contract Committee, the Executive Board, the Delegate Assembly, or rank and file. We only found out about it after the contract was ratified.

A large problem with membership is we tend to view UFT as an outside entity. Why did the UFT do this or that? Actually, we are the UFT. But in terms of union action, we don’t do much other than wear a particular color every once in a while.

The more pressing problem with membership is that we trust leadership. We now know they withheld the health care deal expressly to mislead us, so we ought not to have done that.

I was pretty surprised when we were told the default for retirees would now be a Medicare Advantage plan. My mind went straight to Joe Namath on TV hawking Advantage as though it’s the new aluminum siding. Get it now, quickly, before time runs out!

But union president Micheal Mulgrew told us this was a new kind of Advantage. It wouldn’t be like the Namath plan. Every doctor who accepted Medicare was going to take it. At first, I was willing to give it a try if I retired anytime soon.

But then members started asking doctors whether they accepted this plan, and doctors answered no, they did not. Health care for city workers is negotiated by the Municipal Labor Committee, an umbrella group of city unions (not all of whom support these changes). Evidently, the MLC, before announcing this plan, had not even bothered to enlist doctors to participate.

Any retiree who wanted to stay in standard Medicare would have to pony up $191 per person per month, almost $5,000 a year for a couple. That’s a considerable expense for people trying to get by on a pension. I started hearing complaints from people I’d never known to complain before.

Another thing MLC failed to do was check current regulations. The city was precluded from charging people to enact this program. MLC, UFT included, lobbied to change Administrative Code 12-126 along with Mayor Eric Adams.

Given these blunders, and given the health care agreement was born of blatant deceit, it’s a wonder anyone trusts MLC or UFT leadership on health care, or anything whatsoever.

We recently received an email from Mulgrew suggesting that, if the law were not changed, in-service members might have to pay $1,500 a year to retain health care. This put forth a zero-sum game, pitting in-service members against retired ones. This notion is antithetical to that of union.

Why is Michael Mulgrew working so hard to help various mayors, our actual adversaries in collective bargaining, to save money at the expense of membership? That’s likely because the  health care agreements (which union leadership had kept secret until after we’d voted up the contract) continue after our contract expires, which indeed it has. In this outlandish one-sided agreement, our health care continues to be cut, but the city is not obliged to give us a dime in compensation increases.

It’s beyond disheartening to learn what a miserable job our negotiators did for us in 2018. All our hours on the Contract Committee were wasted, since leadership made a counter-productive deal behind our back. They sacrificed our health care to win only modest gains. Our Contract Committee is a sham, UFT has the worst negotiating team in the world, and every member of that team should be impeached or fired.

Now the union is trying to bargain a new contract with Eric Adams, and Adams says health care savings must be taken care of beforehand. Michael Mulgrew tells us to wear blue one day. Call me cynical, but I don’t see how that frightens Adams.

UFT rank and file absolutely did not approve of these health savings. As far as I’m concerned, they ought to come directly out of the pockets of those who made the agreements.

They fooled me once, but it won’t happen again. Hopefully my union brothers and sisters aren’t fooled anymore either.

Correction: There was a health agreement made by MLC six months before the 2018 Contract, and UFT members were informed if it. Rank and file had not voted on it, and we were not aware of the particulars or implications. It was incorporated into Appendix B of the contract, which was not shared with us before the contract was ratified.