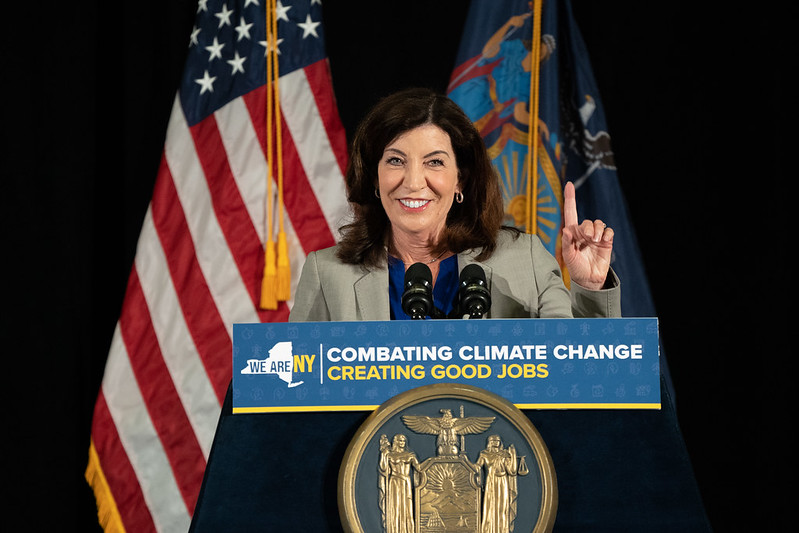 Governor Kathy Hochul won election in a low turnout race thanks to progressive activists, elected officials, and organizations who showed up to get out the vote. Now it’s time for her to deliver on her campaign’s climate promises and pass the Climate, Jobs and Justice legislative package.

It has been three years since New York passed its landmark climate law, the Climate Leadership and Community Protection Act. In that time, the state has failed to live up to its climate commitments, and crucial climate legislation has stalled in the Assembly, year after year. Even now, Governor Hochul still has not signed one of the few climate bills that did pass in the 2022 session, a bill to enact a two-year moratorium on new fossil-fuel-plant cryptocurrency mining in New York.

Meanwhile, the climate crisis has continued to hurt communities across the state through hurricanes, deadly heat waves, and flooding. Just two days before Election Day, temperatures neared 80 degrees in New York City. And this year’s IPCC report sounded the alarm that it is “now or never” for climate action, calling for rapid and immediate cuts to global greenhouse gas emissions to prevent climate catastrophe.

New Yorkers understand how important climate action is, and Governor Hochul has promised she does as well. Ten years after Hurricane Sandy devastated much of the state, the $4.2 billion Environmental Bond Act, which would fund some climate mitigation projects and the governor and Legislature thankfully put on the ballot, earned hundreds of thousands more votes than Hochul herself. Statewide, a sizable 60% of voters voted yes on the proposal, and in New York City, a whopping 81% approved the measure.

But the funding that comes with the passage of the Environmental Bond Act is just a start, and we need Hochul and the State Legislature to take the next step. The Climate, Jobs and Justice Package would fully implement the CLCPA and enact a series of legislative priorities like the Build Public Renewables Act to transition our electrical grid to renewables. The package would also hold corporate polluters accountable by ending fossil fuel subsidies and taxing the wealthy to fund the necessary transitions mandated by the CLCPA.

The election made clear that New Yorkers want climate leadership. The reason I and many other activists joined the Working Families Party to volunteer for Hochul is because we know how urgently New York needs to enact climate justice and she was the better choice to lead on climate. Governor Hochul must ensure the 2023 legislative session fulfills the promises of the CLCPA and puts our state on track for a just, livable future.

***
Liat Olenick is an activist and teacher in Brooklyn. On Twitter @Liat_RO.