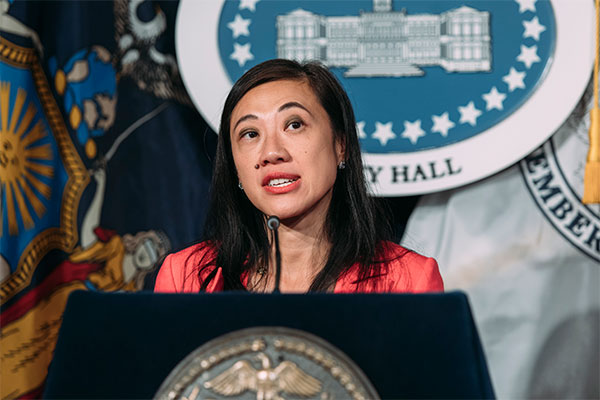 While this incident has largely disappeared from the public discourse, it brought to the surface a pernicious stereotype about Asian New Yorkers as we come off another year when hate crimes against the AAPI community continue to be a far-too-common occurrence.

Like many immigrants, my family came to the United States after escaping tragedy. In 1975, the Khmer Rouge began persecuting and killing thousands of people during what would be known as the Cambodian genocide. The government eventually murdered or disappeared nearly 300,000 Chinese Cambodians, including my mother’s sisters and parents.

The United States took us in and we became proud Americans. We rebuilt our lives in New York City and have called Queens home ever since. I was educated in American schools, grew up around other American kids and culture, and always thought of myself as American. Like many AAPIs, this is the only home that I know.

Despite the welcome and our deep roots here, there was an uglier side to growing up in America as an Asian immigrant. Throughout my childhood, I often received one of two common pieces of “advice”: that I should learn English and that I should go back to my own country. And despite attending school here for most of my life, graduating from Columbia Law School and working for Congress, individuals continue to “compliment” me on how well I speak English.

When statements like these were made, very rarely did anyone denounce them or start a discussion about how they affected me. I just accepted it as part of growing up an immigrant — an Asian American immigrant — in the United States.

Words like these and those said in Council Chambers have real consequences. Casting Asian Americans as foreigners rationalizes the continued treatment of Asians as belonging to a nebulous group of outsiders who don’t have the same rights or value as other Americans. Like Islamophobia, homophobia, or anti-Black racism, this “othering” serves as a tool to legitimize both exclusion and violence.

When the COVID-19 pandemic hit, I began to realize that my experiences with racism weren’t just part of growing up an immigrant in America, it was part of a larger issue that prejudice against the AAPI community is not only overlooked, but in too many instances tolerated.

While perusing soda bottles in a store one day, a woman began screaming at me to stop touching everything because the virus came from me. Her visceral anger stemmed from the belief that I was spreading covid because I was Asian. I looked around for help because I was worried I was about to be physically attacked, but as usual there wasn’t any help to be found.

This isn’t a new threat for Asian Americans.

While the recent rise in hatred targeting Asians may be attributable to a president who threw around words like “kung flu” and the “China virus,” attempts to cast Asians as foreign is an age-old trope repeatedly utilized in attempts to justify both violence and racist government policies. The pandemic bigotry and the recent rise in violence is just the newest incarnation of a form of racism that has pervaded the United States since its founding.

When an economic downturn tightened the labor market in the 1870s, many political figures and the press scapegoated Asians, who they claimed were unassimilable. Asian workers were blamed for putting downward pressure on wages for white workers. Efforts to brand Asians as foreigners culminated in the 1885 Rock Springs massacre, when at least 28 Chinese miners were murdered.

The same trope was rolled out shortly after the attack on Pearl Harbor, when the United States began forcibly relocating people of Japanese descent into concentration camps. Approximately 80,000 of those interned were actually second or third generation Americans with U.S. citizenship.

Fast-forward to 1982 in Detroit, where Vincent Chin, an American of Chinese descent, was beaten to death by two men motivated by anti-Japanese sentiment caused by the decline of the auto industry. His killers received three years’ probation and a $3,000 fine.

Chin wasn’t seen as an American citizen or an individual, he was a foreigner to be blamed for the ills of this country. As in the murders of Asian Americans in the 1800s, Chin’s killers were essentially excused for their actions.

For Asian Americans, insinuations and outright accusations of being foreigners aren’t just words. We are too often not viewed as equal citizens of this country, so people feel justified setting fire to an elderly AAPI woman, pushing an Asian American woman from a subway platform, or entering City Hall and delivering bigoted remarks.

After the incident before the City Council, some tried to explain away the comments by stating the person who delivered them was reacting to his own history with racism. Once again, many in the AAPI community felt like our pain was being ignored; that our rights and freedoms as American citizens are conditional and that this will never be our home.

As we enter a new year, it is my hope that the conversations around the AAPI community aren’t centered on whether or not we belong here, but rather our indispensable role in this great city.