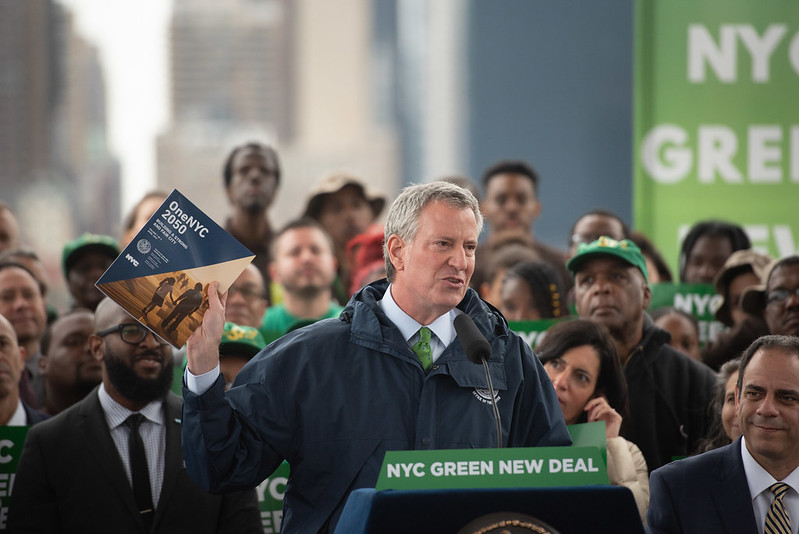 In 2019, New York City passed some of the most progressive climate legislation in the country. Local Law 97 requires 50,000 large buildings to slash their carbon output en route to cutting emissions 40% by 2030. Yet if the passage of the law suggested that the city would be putting people and the planet before the typical monied powers that be (real estate, the utilities, and others), the latest city report on the law’s actual implementation — co-commissioned and funded by Con Edison and National Grid — certainly suggests otherwise.

Let us be clear up front: no climate study commissioned and funded by billion-dollar corporations that treat vital energy as a plaything for shareholders and not a basic human right can be taken the least bit seriously. Con Edison and National Grid are part of the problem, not part of the solution. Their participation makes the study a non-starter for real planning.

The fact that the city nonetheless calls its partnership with the companies “groundbreaking” and “historic” should disturb us greatly. These are companies that, in the past few years alone, have spent millions lobbying against climate legislation and renewable energy; neglected critical infrastructure, intentionally blacked out low-income neighborhoods, and inflated gas demand for the sake of profit; held ratepayers hostage as bargaining chips; used outdated statistics on methane in their own manipulative emissions reporting; and, most recently, indulged in bribery schemes—and all while charging New Yorkers the second highest municipal energy rates in the country. Given the urgency of the climate crisis, this isn’t a “groundbreaking” partnership so much as a stupid one.

The report’s trick is to present its proposed “pathways” to carbon neutrality as though they’d been chosen because they’re possible, not because they’re profitable. Take, for example, the inclusion of gas-based solutions as a key component of all three pathways—itself a disastrous proposition. At no point does the report mention that National Grid’s business model in New York City relies almost exclusively on gas, since it doesn’t provide electricity in the area. Were all of its customers to electrify their heating and cooking, billions of dollars in gas distribution assets would become stranded.

The report’s absurd task thus becomes how to save those gas assets while at the same time making meaningful reductions in gas emissions. That this is impossible is laid bare by the report’s tortured attempt to frame renewable natural gas and hydrogen gas blends as the emissions-reducing saviors of the gas system even as the authors repeatedly allude to the unlikelihood of these solutions coming to fruition. They have bet the house on a technocratic solution that clearly isn’t one.

As the report puts it elsewhere: fossil gas use would be reduced across all pathways, but only to the degree to which these “greener” gases are available. To be available, they would require massive new pipelines to carry RNG from factory farms into the city, commodity costs dropping precipitously, and precious renewable electricity being diverted into the production of costly “green hydrogen” just to keep gas assets from becoming stranded. All of this, in turn, would likely force low-income gas customers to shoulder more and more of the costs of maintaining increasingly obsolete infrastructure as affluent customers abandon it to electrify.

The report even leaves open the possibility of adding more pipelines and gas, conveniently sidestepping the mayor’s Executive Order 52, which bans any increase in the city’s supply of  fossil fuels, by claiming that the order was issued after the report was researched. One can only speculate that this was to leave open the possibility of creating an exception for “green” gas blends in some forsaken future.

“Reimagining the role of existing infrastructure,” the report calls it elsewhere. Manipulative nonsense. If the city needs to reimagine anything, it is the monopoly utilities themselves. Yet we can likely only expect more concessions to these corporate giants in the near future. In the ongoing rate negotiations with National Grid, for instance, the city has so far done the bare minimum to reject a proposal (supported by Governor Cuomo’s feckless Department of Public Safety) that would raise New Yorkers’ gas bills to pay for more fossil fuel infrastructure we don’t need, failing to use its substantial influence to ensure that New Yorkers truly are protected.

The NY Build Public Renewables Act (NYBPRA), introduced in Albany in the spring but stymied so far by fossil fuel-friendly lawmakers, would offer another path forward. It would begin the work of replacing our corporate energy providers with a democratically-controlled, publicly-owned utility that would answer to New Yorkers, not shareholders, while foregoing profits for the sake of 100% renewable electricity and tens of thousands of green union jobs, among other things.

We’ll keep fighting for NYBPRA, because we know that the only way to truly solve the climate crisis is to end the corporate control of our ecological future. Until the city understands that as well, we’ll have to settle for gas-friendly compromises that get us nowhere.

***
Kim Fraczek is the director of Sane Energy Project. Robert Wood is a member of the NYC-DSA Ecosocialist Working Group.